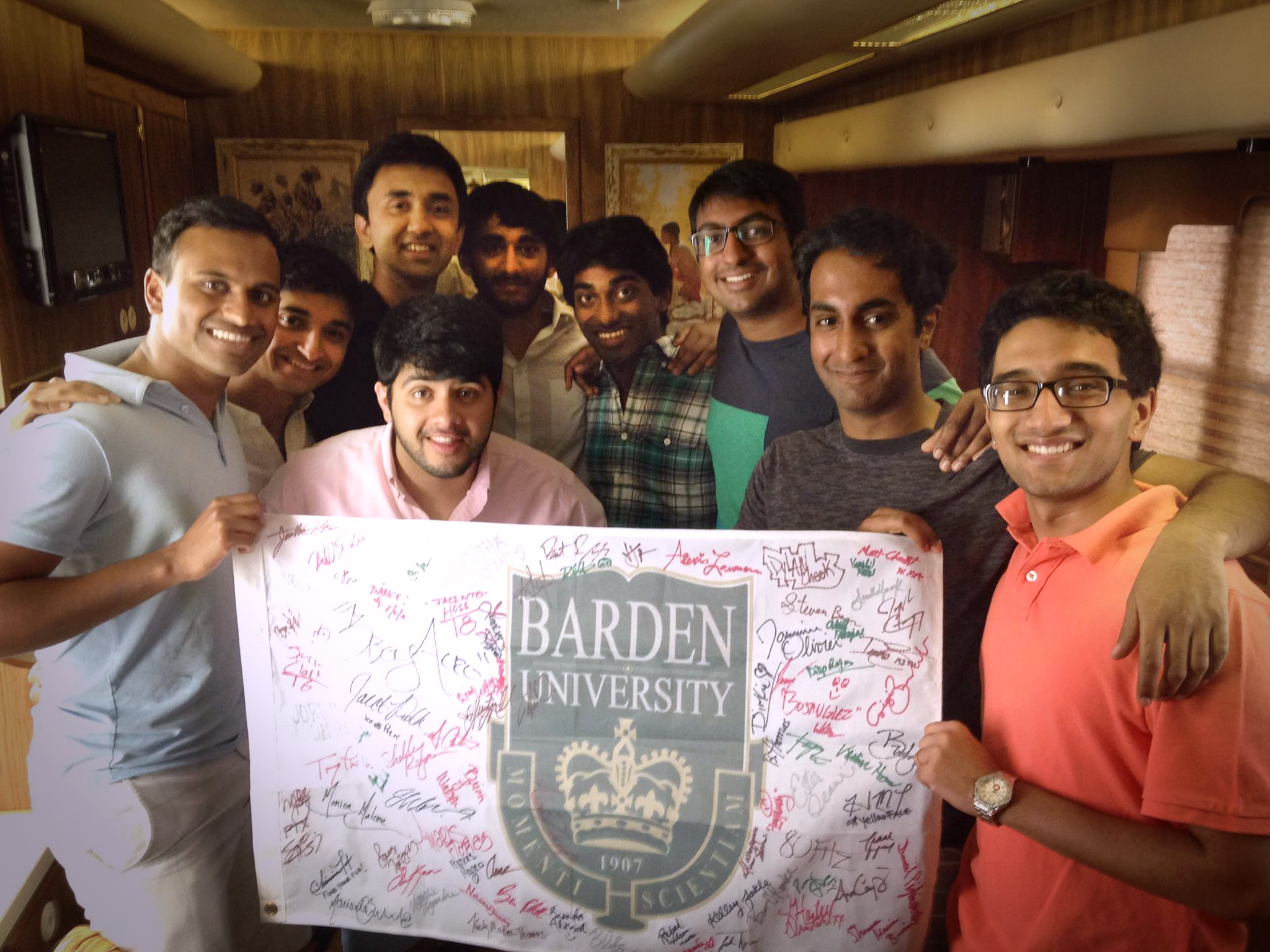 Penn Masala inside a set trailer for Pitch Perfect 2

When the email appeared around this time last year, they figured it was a prank. What college a cappella group gets a message, out of the blue, asking if they’d like to appear in the sequel to a hit movie?

But as the members of Penn Masala soon learned, it was a serious offer. In fact, Pitch Perfect 2’s director, Elizabeth Banks C’96, had asked for them specifically. Now the undergrad singers are just a few weeks from seeing themselves on the big screen—appearing as the only real-life college a cappella group in a movie about college a cappella groups.

“It was pretty surreal,” says Dilip Rajan, a senior in Wharton and the president of Penn Masala, which bills itself as a cappella’s first Hindi group and performs songs that fuse South Asian and Western music. “I don’t think any of us expected when we signed up to go to Penn that we’d be on-set filming a movie like Pitch Perfect 2.”

Rajan says Penn Masala plays an Indian a cappella group that competes against the film’s fictional Barden Bellas in the World Championships of A Cappella. “We’re just a short cameo in the movie,” he adds, “probably 30 seconds or something, but it’s still super exciting.”

Last spring Penn Masala worked with Deke Sharon, the movie’s vocal producer and a major player in the a cappella world, to record a song in Philly. Then last summer, they flew to Baton Rouge, Louisiana, to join the set of Pitch Perfect 2 for a few days of filming—or nights, rather. Rajan says filming started around sundown and wrapped close to 5 a.m. both days.

The group met Anna Kendrick—who plays the movie’s main character, Beca—and hung out with Anna Camp, who co-stars as Aubrey. “She was just incredibly down-to-earth,” Rajan says of Camp. “We talked to her for a while and she even took a selfie with one of the guys in the group.”

They also sat down with Banks, who produced both Pitch Perfect movies with her husband, Max Handelman C’95, and has admitted to drawing inspiration from the Penn a cappella scene.

The movie opens on May 15, but Rajan is hoping for an advance screening on campus before then—that way students can see it before they disperse for the summer. Here’s the trailer:

And here’s a little more from Penn Masala, starting with their most-viewed videos:

…and their most recent:

Speaking of Pitch Perfect and its many Penn ties, John Legend C’99 is executive-producing a new reality show inspired by Banks and Handelman’s movie. It’s called Sing It On, and it follows five collegiate a cappella teams as they compete in the International Championship of Collegiate A Cappella (it goes by ICCA, which may sound familiar if you saw this article). The first episode airs May 13. In the meantime, there’s this preview clip.