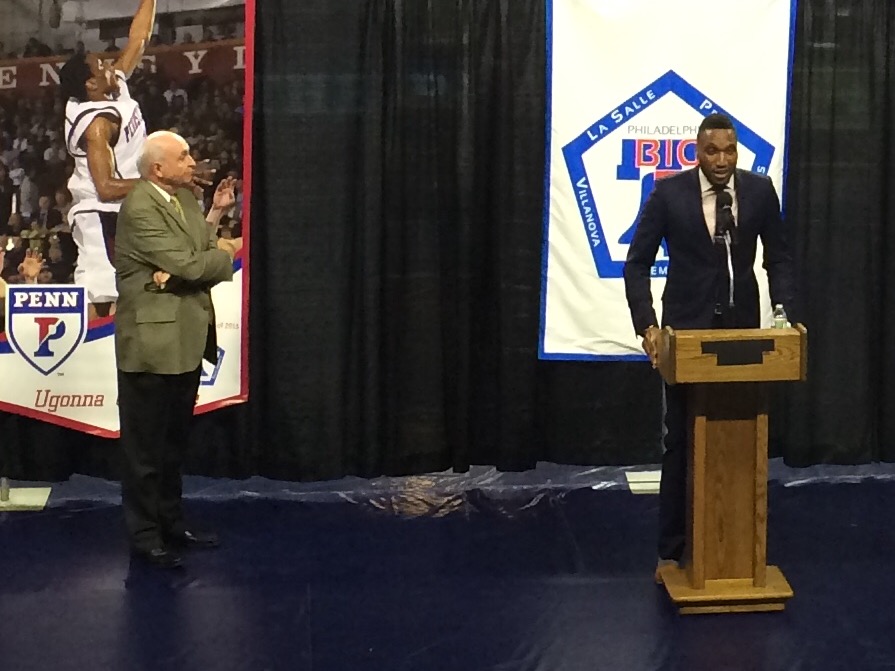 One day recently, Ugonna Onyekwe W’03 was walking through the streets of New York City when he heard a familiar sound. He turned his head to see someone yelling “Uuuuuuu” with their arms held up in the shape of the letter “U.”

Onyekwe, more than a decade removed from his playing days at the Palestra, couldn’t help but smile.

“It still comes up all the time,” he said. “To think it meant that much to fans and to be appreciated like that, it’s amazing. What can I say? It’s just awesome.”

Onyekwe was more than just a great basketball player at Penn. In many ways, he was a phenomenon. A rare breed of Ivy League player, the athletic forward from Nigeria by way of London and a private school in Pennsylvania captivated Penn fans, many of who bellowed the first letter of his first name from his first game in 1999.

Onyekwe was mostly expressionless as those chants rained down from the Palestra, usually as he finished an alley oop or another ridiculously impressive dunk that most Ivy League players couldn’t do. But as he returned to the Palestra this week to be inducted into the Big 5 Hall of Fame, he thought about the chills he got when the gym was full and people were chanting his name.

And he also thought about what it was like gym when it was empty.

“The games were always amazing but some of the fondest times were working out in the summer with just you and a couple of people and it’s 120 degrees and you’re like, ‘Why the hell am I doing this?’” Onyekwe said, shortly before stepping up to the podium and giving his Hall of Fame induction speech. “Those were just fun times – out here, doing what you love, not a care in the world, all the possibilities. It was just awesome.”

Being at Penn wasn’t always awesome for Onyekwe. Yes, he was the Ivy League Rookie of the Year and the conference’s two-time MVP. Yes, he led the Quakers to Ivy championships in 2000, 2002 and 2003, as well as a perfect Big 5 record in 2002. Yes, he still ranks second in program history in scoring with 1,762 career points (behind only Ernie Beck).

But the star player famously clashed with head coach Fran Dunphy, who admitted as much during Monday’s ceremony.

“He was an extraordinary athlete,” said Dunphy, now the coach at Temple. “I got on U pretty badly. Because he was so talented, I wanted more. I wanted more from him. I wouldn’t have liked me too much the way I got on him. But he hung in there and I’m very appreciative of the relationship we have now. He’s a terrific guy and he had a splendid career here.”

Onyekwe laughed when thinking back to how one of his most famous plays irritated Dunphy – his 360 slam late in Penn’s win at Princeton during his freshman year (feel free to watch that above, over and over again). But he’s still glad he did it as that one dunk, even 15 years later, became a symbol of how he elevated Penn basketball.

“It’s turned into one of those things that’s a story all the time,” he said. “And it’s pretty cool to be able to do that and have it be remembered as something, especially against Princeton. That always makes it sweeter.”

If that dunk marked the exciting beginning of his career at Penn, his remarkable 30-point game against Oklahoma State in the first round of the 2003 NCAA tournament marked a fitting conclusion. It was also fitting that he was inducted into the Big 5 Hall of Fame alongside broadcaster Bill Raftery, who called that game – an otherwise disappointing 77-63 loss for Penn in the final game for Onyekwe and fellow seniors Koko Archibong, Andy Toole and Dave Klatsky. 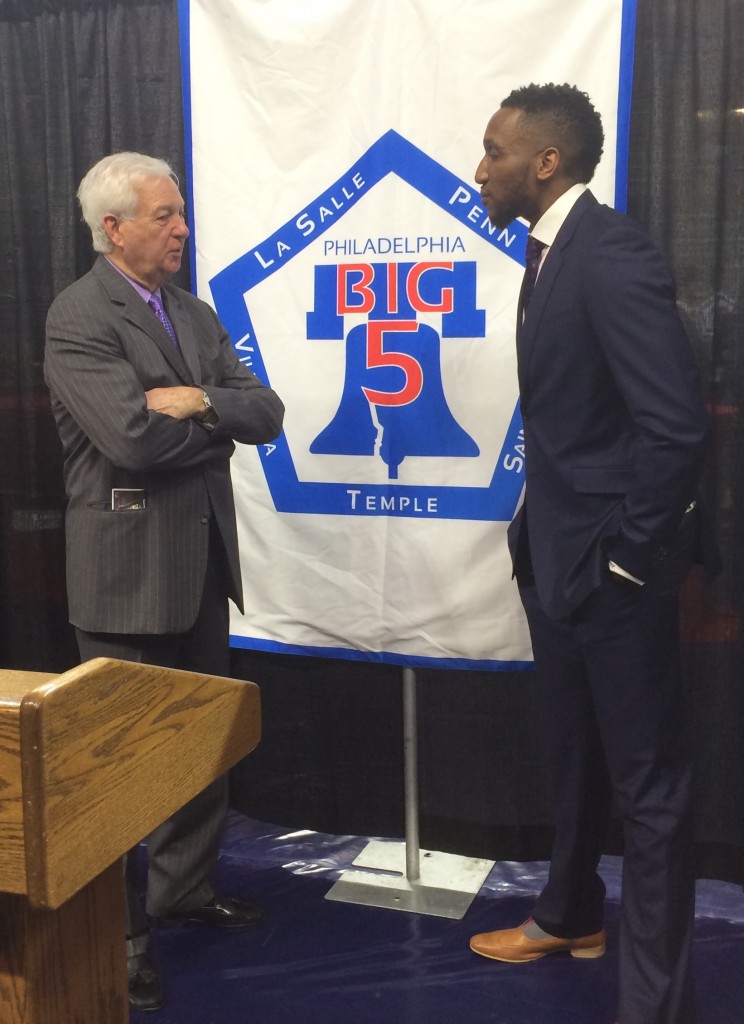 But during his induction speech, Onyekwe didn’t really talk about playing in the NCAA tournament or any of his individual accolades. Instead, he focused on his remarkable backstory. Twelve years after wowing the Palestra crowd with his dunks, he wowed the audience again as he told them how he didn’t pick up a basketball until he was 11 and only did so after watching an NBA game from his native Nigeria and deciding “I think I can do that.”

And he was right. Despite getting such a late start and not playing his first organized game until he was 14 and living in London, Onyekwe starred for Mercersburg Academy’s basketball team after moving to the United States. And he decided on Penn after taking a recruiting visit to the Palestra and sitting in Section 202 to watch the Quakers take on a Temple team that featured All-American Pepe Sanchez (another one of Onyekwe’s fellow 2015 Hall of Fame inductees).

It was one of the best decisions he ever made.

“I hope my story,” he said, “serves as inspiration for other people.”

Then, he walked off the Palestra court to a huge ovation, just as he had so many times before.