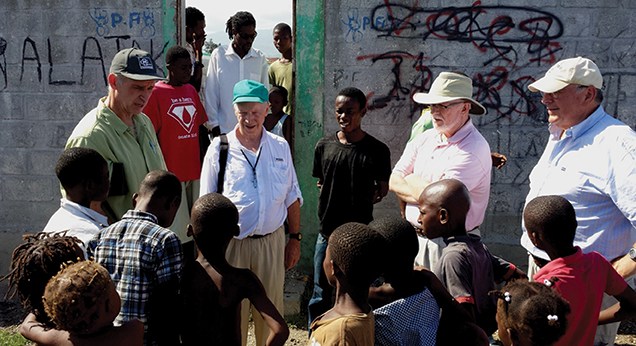 Discovering the living Gospel in Penn’s “Citadel of Atheism.”

By Joseph DiStefano | I have kept up with a few of my Penn professors—two lasted long enough to teach one of my sons—and met more in my work as a journalist. But 30 years after we marched behind banners and bagpipes to the old Convention Center to grab our diplomas, one of my most memorable Penn instructors remains a priest, Father Tom Hagan. He taught no listed class, but worked part-time at the Newman Center, preached a remarkable Mass every week in the wee hours after Saturday Night Live, and encouraged us students to set up a community outreach program to run weekly visits to Philadelphia prisons, schools, soup kitchens, and old folks’ homes—not with any illusion of ending poverty and injustice, but to help us see a broader vision of America, and make it personal, listening to the people in the city around us, in hopes we would find ways in the careers and homes we would build to honor and labor for a better world.

Tom grew up in a Northeast Philadelphia rowhome, between the family diner and a bustling Catholic parish, on a block his immigrant parents called “a piece of heaven.” Running with a knuckleheaded crew as a teen, he said he might have gone to jail, but instead went into seminary, where he was exposed to the reforming promise of Vatican II, embodied by the Berrigan brothers and other activists who thought the Church best lived Christ’s word when it worked for peace and justice. He had taught at North Catholic High, and wore out his welcome at one parish for preaching that he’d rather have a gay son than one who volunteered to fight an unjust war. He mobilized residents to shut drug hangouts, and lived, when we knew him, in a rowhome in a half-abandoned block in the city’s Kensington ex-factory district, where he drove a yellow Volkswagen bug, stopping to listen to anyone with a story, often slipping them a few bucks or the address of someone he knew could help.

Tom’s puckish humor, his questioning of the powers that be, and his antic self-deprecating stories—like the way he confused the words for fish and sin in his brief Mexican ministry—culminated in provocations to love all the people in our lives and to recognize the needs of our neighbors, instead of focusing over-closely on our careers. It gave kids like me, who had struggled against authority in Catholic school, hope that it really was possible to approach the radical Gospel of Jesus in this life—doing the work my friend Andy Margolis C’84 L’87, who faithfully attended both Hillel services and Community Outreach forays, calls tikkun olam, repairing the world.

I spent my first five years after college working for a migrant farmworkers’ association, paying my loans while working off a little of the soul debt I felt I owed for the grace of a Penn degree. I married, built a career writing about money and people, raised six kids. Tom went on to gigs at Lafayette and Princeton, then built a ministry in Haiti. He grubstaked his first mission there with funds raised at an infamously raucous Lafayette frat party led by a reggae band who crashed in his room, then went on to befriend the Simon family, US Senator Mike DeWine, and other donors who helped build Tom’s network of schools, called Hands Together, and the Haitian-run medical and farm projects that radiated from his base in the Cite Soleil slum.

Last fall my classmate Vince Santilli C’84, a banking veteran who now runs Homes for the Brave in his native Bridgeport, Connecticut, sent a group of us a video of a talk Tom gave at his church. It was the same Tom, seeming barely aged, telling stories of Philadelphia and Haiti. He said something unmissionary: “You don’t have to go to Haiti.” And something un-pastor-like: “I don’t need your money.”

It was pure Tom: “If you want to help my people in need, the best thing you can do is live out your mission. The greatest thing you fathers can do is love your kids’ mothers. And stop spoiling your children; you don’t need to keep feeding the appetite for material possessions. We emphasize performance too much. Let your children know they are really loved. They have great value. You do that, you create a piece of heaven.”

He admitted that leaves him open to accusations of embracing mediocrity over merit. But to Hagan, “excellence is the result of when you really love another person.”

The Haiti earthquake of 2010 killed some of his friends and neighbors. Some churches preached that “God is punishing us,” Hagan told the Connecticut crowd. “Our message is that God will never abandon you.”

Working and praying with the groups Hagan formed “was nothing short of the initiation into manhood I hungered for,” recalls Fran Olivieri EE’85 G’86. “Penn taught me skills to earn a lot of money. Tom taught me how to be the man I wanted to be in my life. A man willing to share his feelings, who speaks his truth.” For Olivieri, hearing Tom preach—he would relocate the Marriage at Cana to a Kensington social hall, imagining Mary, Christ’s mother, scanning the guests for possible marriage matches—brought church “into the present moment.” A flower pushing through a sidewalk crack, Tom said, could do as much as any person to improve the world.

Tom’s message also resonated with Ken Athaide W’84. “Going to the soup kitchen [at St. Francis Inn on Kensington Avenue] was like a trip to Mars—a universe away from our world of smart, seemingly together and always confident Penn students and faculty.” Urging students to see the poor “as our brothers and sisters, Father Tom was really helping transform our souls, a bit.” Athaide doesn’t always see his career—marketing research—as “a mission from God.” But after the 2012 earthquake, his daughter’s school collected funds for Hands Together, and Athaide read in Hagan’s thank-you email the voice of “humble Tom,” living in a tent next to the generator powering his shattered compound in Port-au-Prince.

The Newman outreach programs Lucy Randel C’84 ChE’84 led with Stephanie Dangel C’84 W’84 G’84 and the late Joseph Killackey W’85 WG’03 presaged the civic ethos that now drives the Netter Center for Community Partnerships and other outward-facing Penn programs. Randel recalls Hagan citing the group’s ministries at Holmesburg Prison and the Youth Study Center to reflect that there are also “prisoners” at college, trapped by personal and social expectations that “cost them their authenticity.” For her, outreach made Newman “much more than weekly Mass, it became a home away from home” and an inspiration for her environmental and anti-death-penalty activism today.

“Tom convinced us to act, without condemning us” for earlier inaction, reflects John Alessi C’85.

My mother was a Catholic firm in morals, doctrine, and practice, but skeptical of priests, who, she warned us, lead difficult, “unnatural” lives. “Saints are happy people,” she insisted, not the pained martyrs with their eyes rolled back shown on old holy cards.

Tom to me exemplified a practical, energetic sainthood. He introduced us to allied souls, both within the Penn community and beyond it, like the Kensington Franciscans—brothers and sisters who gathered early and late for prayer and song, and ministered all day to immigrants, addicts, and the hungry.

I went to Catholic school for 12 years, but it took my years at Penn—the profoundly worldly place that another West Philly pastor referred to, laughingly, as the “Citadel of Atheism”—to see that people could take the old Gospels of our faith and live them.

Joseph N. DiStefano C’85 is a columnist at The Philadelphia Inquirer: JoeD@phillynews.com. He and his family live in Wilmington, Delaware.