Now Showing: A Coney Island of the Memory 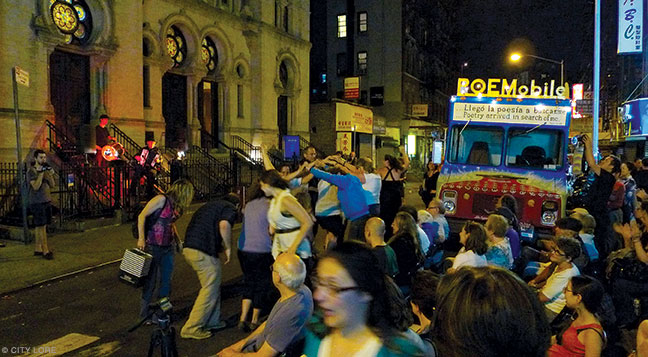 Class of ’69 | In a small gallery on Manhattan’s Lower East Side, a waxy replica of Albert Einstein’s head sits encased in glass, the famously unkempt hair all askew. A fading metal cart harks back to carnival rides long past, and a man’s bathing trunks (part of a larger, full-length ensemble) hang on a wall. They recall a pivotal time in the life of Coney Island, New York’s great seaside amusement park—and the folk revival that caught it at the edge of oblivion.

The gallery belongs to City Lore (citylore.org), the nonprofit brainchild of Steve Zeitlin W’69 Gr’78 that showcases New York’s multifarious cultural heritage and populations. Boardwalk Renaissance: How the Arts Saved Coney Island, which runs through May 8, tells the story of the park’s salvation. A nod to Zeitlin’s earliest New York projects, it complemented a larger exhibition at the Brooklyn Museum of Art— Coney Island: Visions of an American Dreamland, 1861-2008, which closed in March.

Zeitlin began City Lore in 1986 to showcase the past and support the future of folklife in New York. At the time, that was a novel idea.

“Even in the field of folklore, people didn’t think that urban folklore existed,” he says. The discipline was then devoted to “agricultural communities where fiddlers would play in the South.”

But Zeitlin saw the potential in the history and traditions brought by New York’s many immigrant groups, and the sounds, art, and stories that bubbled up from its streets.

City Lore’s earliest exhibits and collaborations were devoted to these streams of local heritage. In City Play, a photo book published in 1990, Zeitlin and his wife and colleague, Amanda Dargan Gr’88, showcased the creativity of children’s games through classic street photography. They celebrated immigrant traditions with “City Lore ’90, the New New Yorkers,” a festival of ethnic crafts and music held in Central Park that year.

When Zeitlin arrived in New York in 1981, Coney Island’s colorful past was a lot more appealing than its present. The cheery home of three beachside amusement parks had become a center for mobsters and prostitution, and some landlords had torched empty buildings to collect insurance. At this pivotal time, artists attempted to fill the void with an avant-garde scene, creating performance art-shows in the old wax museum and filling a haunted house with paintings for a moving gallery ride.

Zeitlin and Dargan had just finished “American Talkers,” an audio project for the Smithsonian Institution that reached back to the days of early sideshows, medicine “docs,” and pitchmen who would lure onlookers into the shows. He thought the same sort of spectacle wrapped in carnival glitz would ultimately save the parks—an idea that led to the exhibit. “It was burlesque and sideshows and the Mermaid Parade that were going to be the future of Coney Island,” he explains. “So where its future lay was in bringing back its past.”

The bathing suit was founding artist Dick Zigun’s first costume for the colorful Mermaid Parade, the annual celebration of New York’s bizarreness and fancy. Einstein’s wild head came from Lilly’s World of Wax, which was largely devoted to paying macabre homage to grisly murders. And the lonely cart is a nod to that avant-garde moment.

For Zeitlin, a literature-loving Wharton grad who had briefly pursued a business career before teaching at a Jewish day school in Boston and earning a master’s in literature from Bucknell, folklore was both a way to engage with the arts and a discipline “that was totally unique and involved with creating beauty in the world.” He credits his conversion to the late Kenneth Goldstein Gr’63, then chair of the department: “He told me at my interview, ‘Folklore is a religion, and folklorists are its missionaries,’ so I immediately signed up.”

City Lore and its missionaries have done a number of things to preserve and promote the artifacts and traditions of that religion, many of which lack funding and can get overlooked in the “ebb and flow of New York’s rapidly changing cultural landscape,” as Zeitlin puts it. One is Place Matters, a census of city organizations and art spaces built out of local cultural centers, which he formed with the help of the Municipal Art Society of New York. Its interactive online map features still-extant icons like Yonah Schimmel’s Knish Bakery and long-gone cultural hubs like the Teatro Puerto Rico in the Bronx. City Lore also offers financial support to artists like the filmmaker Ric Burns, as well as international art and relief projects in places like Haiti and Japan.

Then there is the POEMobile, “a magnificent art truck with brightly painted iron wings arching above its roof and poems in two dozen languages emblazoned on its sides,” as Zeitlin writes in his upcoming book The Poetry of Everyday Life, to be published in August by Cornell University Press. This near-mystical lorry was fashioned as a means of turning poetry into performance and audiences into collaborators. It projects words onto city walls, bridges, and other spaces while poets of many languages and ethnicities read their work aloud. The truck alternates English translation with native tongues, leaving an ephemeral mark on city buildings.

The Poetry of Everyday Life is a memoir of encounters, relationships, and stories—each one distilled to its essentials and infused with poetry. By exploring the rich collective past of the many individuals and communities Zeitlin has worked with, it also serves as a guide, encouraging the reader to create her own poetry—and to treat life’s experiences as subject matter.