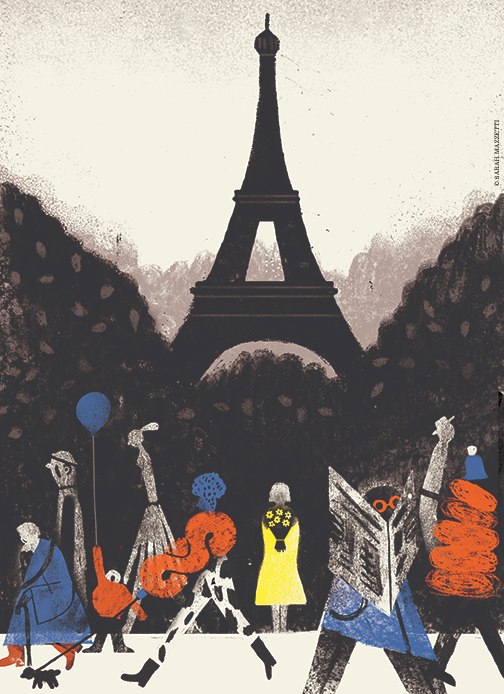 By Sofia Demopolos | Freda wanted to buy flowers for my host mother, but didn’t speak any French, so I translated. My efforts may have been unnecessary; it seemed that most Parisians spoke English more beautifully than I did. But as the florist wrapped the bouquet in paper, my friend did manage a merci.

I was surprised the flower shop was open at all. It was the day after the Paris terror attacks. We were still learning the names of the 130 people slaughtered on restaurant terraces and in the Bataclan theater. American businesses would have been closed out of respect, but as I soon learned, the French mourned differently.

Freda and I were both spending a semester in Europe, completing that standard collegiate rite of passage. Her university was in Seville, but she had come to visit me on November 13, arriving just in time for dinner. We had chosen the Centre Pompidou as our meeting point, and I waited in front while she tried to find her way through the twisting streets without the benefit of a local cellular data plan. It was dark when I saw her from across the square, but we recognized each other’s silhouettes and adopted funny walks to meet in the center.

We wandered a bit and decided on a Middle Eastern restaurant. Our waiter flirted with us awkwardly when he learned we were foreigners, bringing us free baklava at the end of the meal. Afterward, we took the Metro to the Latin Quarter, walked around, and thought about what to do next. A couple passed us, voices raised.

“Trouble in paradise?” Freda asked. “What are they saying?”

“She says they need to go home right now, and he’s telling her to calm down,” I replied.

Freda suggested heading to Belleville, where her hostel was. The Northeast had the best—read: cheapest—bar scene, so I agreed. As we descended the steps of the St. Germain des-Près Metro stop, a crowd of people running out interrupted our chatter. A man shook his finger at us as he sprinted up the steps, shouting something about terrorists.

Freda and I turned to run, confused. Did he mean terrorists were in that very Metro stop? On the sidewalks, groups of people were shouting and waving their arms, attempting in vain to hail passing taxis. I began to panic as terrorist-attack stock footage played in my head. I had no idea where this attack was taking place—I just had to get us home. Frantically, I managed to commandeer a cab from a group of people who couldn’t decide where they wanted to go.

My host mother, Monique, was asleep when we got back to the apartment. Freda and I hurried back to my room and opened up my laptop, soon learning about the carnage taking place across the city from us. I wrote Monique a note explaining that there had been shootings and explosions, and my friend was staying over. Freda took a sleeping pill and curled up on my floor.

The next morning we took a cab through grief-stricken Paris to collect her things from the hostel.

Two of the other students staying in her room were huddled by a little TV, but the fourth girl was absent. She had been on one of the restaurant terraces where the shootings took place, they said, and had gone to the airport at dawn to fly home to the States.

“She watched people get shot,” the girl told us. “She like, stepped over bodies to run away.”

Later that afternoon Freda bought the bouquet and arranged it on the tea table in the hallway. Monique was touched. She told me she’d let students’ friends spend the night before and had them leave without so much as a thank you.

“And how did you know that yellow flowers were my favorite?” she asked me.

It had been a lucky guess on Freda’s part. Lucky Freda, who had chosen the worst date imaginable to see Paris.

Some of the American students left the program. I didn’t want to leave. Many of my friends grimly observed that, considering the number of mass shootings in the United States, we were probably no safer at home than we were in France. We resolved to make the most of what little time we had left in Paris, and I stubbornly went to a screening of Macbeth a few days later, despite warnings to avoid public places. The looming question of whether someone would shoot me in the darkened theater heightened the film’s tension.

I took to watching the news with Monique. Though the government had prohibited public demonstrations, nothing could deter the French from gathering to mourn the victims. Reporters interviewed defiant citizens holding candles and proclaiming that they would not be scared into submission. Monique seemed proud. I felt strange, like a voyeur. This wasn’t my country, yet here I was, watching it suffer and claiming its resilience as my own.

For a little while, we couldn’t watch TV without seeing pictures of the wanted gunmen emblazoned across the screen. Monique, a retired professor of sociology, had strong opinions.

“It will be so hard not to be suspicious—they could be anyone!” she said. “They could be the men who work at the Arab market on the corner!” I doubted it, as the men who worked at the convenience store down the block were much older and rounder, and had deep-set smile lines. I usually stayed quiet when Monique started to talk about Arabs.

Back at the American program building, one of the French teachers went on a diatribe about the fundamental incompatibility of Islam with French Republican values. The program director, an American, was furious, and gossip flared among students about whether this teacher would be fired for her public display of Islamophobia. She wasn’t; everyone seemed to be saying things they “didn’t mean” after the mass murder.

I bought Monique flowers a second time on the day before I left. I was teary-eyed as I cut the rubber band around the stems and let the yellow flowers tumble gently into their chosen arrangement in the vase.

She asked me to take a picture of them and send it to her. I snapped photos from multiple angles, trying to capture as much of the little apartment as I could in the background. I was so caught up in the shoot, I wound up with a camera roll full of yellow bouquets, and not a single image of their recipient to keep for myself.

A year later, I am still tempted to gloss over the ugliness pervading the time following the attacks. I want to think of my host mother as the stoic, patriotic woman who opened her home to a stranger-—the kind-spirited intellectual who loved yellow flowers. I want to expunge my memories of the dinner conversations where she channeled dark views about Muslims. I want to think of Paris as a glittering, carefree binge on art, food, clothes, and culture. My four visits to the Musée d’Orsay don’t belong in the same memory space as the daily sightings of the “Muslims get out” graffiti scribbled on the wall of my Metro stop. How could I reconcile the fantasy of “Paris” with the lived reality?

But it’s unfair to sort my recollections into “worth remembering” and “better left forgotten.” Not even the cities of our dreams are immune to the fear and violence that characterize contemporary life.

Freda and I saw each other a few months after our homecoming. We sat cross-legged on the floor of her dorm room, talking about re-assimilating and what we had left behind. We both missed the pretty quaintness of European cities, and our host mothers. It was all very melancholy—typical talk for returned American students.

She was the first to bring up the attacks, which I had carefully avoided.

“Remember when we thought there were gunmen in the Metro?” she asked. We both shared a hollow laugh, followed by a pause. I struggled to break it.

“Monique said if you’re ever in Paris, you’re welcome to stay with her again.”

In retrospect, the 13th feels more like a jumble of snapshots than a cohesive memory. Frozen portraits of frightened strangers whose faces I remember eerily well. The girl in the hostel who told the story about the absent roommate: she was blonde and athletic-looking, wore a blue T-shirt and shorts, and had a Midwestern accent. The man who warned us that the Metro was closed: I remember his hat, his coat flapping behind him, his expression, and his finger wagging, such an odd but communicative gesture. And then there was the man on the nearly empty Metro the next day, when Freda and I were coming back from her hostel. He seemed to be holding back tears. I wondered if he had lost someone, or if he too was simply overwhelmed by the city’s grief.

I wonder if any of these strangers hold onto a shaky memory of me.

Sofia Demopolos is a senior studying fine arts in the College of Arts and Sciences.

Gazetteer
Glee for All