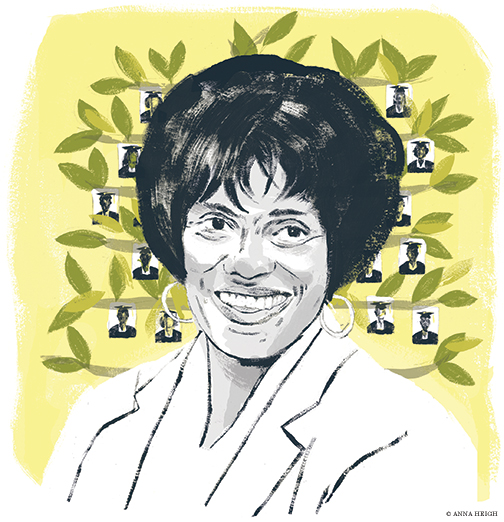 By Karen J. Hamilton | “How is my sweetie? This is Cora, and I want you to give me a call. I got something to tell you … I’m retiring.”

Settling into my office on a Friday morning this past July, I noticed a missed call and voicemail from the previous afternoon. I listened at first excitedly, then wistfully, sadly even, to the message, from the black woman largely responsible for my enrollment at Penn in 1983—and, more importantly, for the fact that, instead of withdrawing one year later, I actually graduated in 1987.

Until July 31st, Cora Ingrum was the director of multicultural programs in Penn’s School of Engineering and Applied Science. She had worked there for over 55 years, starting out as a department secretary in 1960, fresh out of high school in Egg Harbor, New Jersey, near Atlantic City. “When I came to Penn, it was not open in the way you think,” she once told me. “Students would come in, but there were so many barriers for African-American students. ‘You can’t do this. You can’t do that. You won’t make it. Why are you here? Why are you in my class?’ People would actually say that to students.”

When we met, I was a sophomore at Philadelphia’s High School for Engineering and Science (now Carver E&S) and Cora had advanced to be coordinator of programs that identified, recruited, and supported students of color in engineering. She directed the Philadelphia Regional Introduction for Minorities to Engineering (PRIME) program at the University, one of several initiatives in the 1970s and ’80s intended to help level the playing field for minorities in math, science, and engineering.

I had originally expected to study writing at CAPA, the High School for Creative and Performing Arts. Ever since I could talk I had been creating stories and performing in plays, and I even hosted a radio talk show, The Teen Scene, on WPEB-88.1 FM. But my good grades in math and science—along with a “come to Jesus” talk with my father about the money and opportunities for black students entering engineering—landed me at Engineering and Science instead. And that decision led to my participation in PRIME, where I fell in love with Cora Ingrum and with Penn (if not, quite, with engineering).

Along with a group of other Philadelphia high-school students, I spent six weeks learning about the various engineering disciplines and receiving instruction in English, math, and science. For many of us, this was our first exposure to the Ivy League. I was immediately drawn to Cora’s magnetic, spunky personality, her grit, and her humor. And I remember that when she told me, “You can go to Penn!” I believed her.

Fast forward to the fall semester of my sophomore year, and it looked as if we were both wrong. A rigorous class schedule had taken its toll on my academic performance. I was called in for a meeting with an associate dean.

“Maybe Penn isn’t the place for you,” he said gently.

I’ve never been one to hold in my emotions, and the silent, hot tears streaming down my face soon progressed to full-blown hysteria as I envisioned going home and telling my parents that I had been asked to leave the University. I thought about my three younger sisters, and how, as the first one to go to college, I had wanted so badly to set a good example for them. Then I pictured my neighbors on 34th Street, godly proud of the girl from “the Bottom” who had broken through and carved a space on the other side of Market Street. How could I let them all down?

My reaction was more than the associate dean was prepared for. He summoned Cora. Through my tears, I managed to make out her entrance. (At five feet in heels on a good day, the top of her head barely came to the associate dean’s waist.)

Shoving Kleenex into my hands, she glared at me with a look I later understood to be a mother’s diagnostic sizing-up to determine whether anything was really wrong.

I was incoherent, so the associate dean began to explain the dilemma: unsatisfactory progress; failure to pass certain prerequisites needed to enroll in required courses; and finally, his belief that perhaps this 17-year-old product of the Philadelphia school system was not really ready for engineering, or for Penn.

Cora wasn’t having it. She immediately went into problem-solving mode. “What about communications?” she suggested. “You’re such a great writer. And speaker, too. Remember, you have the radio show?”

The associate dean was skeptical. But Cora continued, and as she shoved more Kleenex toward me, her eyes glimmered with something I slightly recognized: hope.

“You’ve had a lot going on, and it’s been a tough year, but you’re so bright!” She was looking at me, but really speaking for his benefit. “Karen was a straight A student and one of my best PRIME students. I know she can do it.” And then: “How about transferring to the College for communications?”

It took two more semesters for me to pull my GPA up enough to successfully transfer into the College and I ran as fast as I could to the Annenberg School, which offers an undergraduate major in communications through the College.

More than 30 years later, we still laugh and reminisce about that dreadful, yet hopeful day. My personal and professional life has been enriched by Cora’s steady, encouraging presence ever since, woven through celebratory lunches marking my first job, marriage, graduate school, new babies, new jobs, and “just because.”

Of course, Ingrum’s greatest legacy has been helping generations of EAS students survive and thrive here and go on to successful careers as engineers, researchers, teachers, and entrepreneurs. Over and over again, current students and accomplished alumni alike have testified to the role she played in providing them with the academic and personal advice and support they needed to pursue their dreams.

While she’s had a vast impact on initiatives to support access and inclusion for all, her passion and purpose has always centered on students of color.

At her retirement celebration this past August, former Engineering dean Joseph Bordogna EE’55 GrE’64 praised her tenacity, her courage, and her advocacy on their behalf. Current dean Vijay Kumar urged several hundred guests to “celebrate her person, her achievements, the institution she helped to build, and the legacy she’s leaving behind.” And Rev. William C. Gipson, Penn’s associate vice provost for equity and access, honored her as a “black woman of faith who knows her true and ancient properties to nurture the children in the community.”

For 21 years, Ingrum served as the co-investigator and director of a National Science Foundation grant designed to increase underrepresented minority candidates for bachelor’s, master’s, and doctoral degrees in STEM disciplines at Penn. Her efforts have been integral to the recruitment of students and faculty of color and have bolstered the national reputation of Penn Engineering through its leadership first in PRIME, and later, in the Graduate Engineering Consortium and the National Society of Black Engineers. Her achievements have been recognized throughout academe and industry, and in 1997 she was honored with a Presidential Award for Excellence in Science, Mathematics and Engineering Mentoring.

Across the tenure of six University presidents and five Engineering School deans, Cora and her longtime assistant Donna Hampton created a welcoming and affirming atmosphere in a small, cluttered office tucked away in the Towne Building. In the 1960s, it served as the equalizing space for students of color, who were frozen out of study groups and pulled all-nighters while she cheered them on: “Yes, you can do this! You’re going to graduate from Penn, and you’re going to be an engineer.” In the ’70s, it provided a point of access to an ivory tower for high-school students who dared to dream of being the first in their families to attend college. For me, in the 1980s, it represented safety, and the lifeline I needed to rescue my existence at Penn. It has continued to offer a vital space to support and advance the aspirations of minority students in engineering up through the present day.

In that very lived-in office this past summer, gesturing toward the pockets of clutter, Cora mused, only half-joking, “I don’t know how I’m going to pack up all of this stuff.” Her desk and shelves were strewn with photos of smiling students and alumni, autographed books, and mountains of paper files. Of her retirement, she reflected, “I prayed for a whole year that the Lord would let me know when was the right time. I know it’s time to pass on the work to someone else.”

Ingrum never had children of her own, but she helped raise her nephew, Kevin McGill EE’84, president of Prospective Technology, a firm committed to environmentally focused industrial solutions. She also “mothered” and mentored a host of students like me. Though I didn’t go on to become an engineer, she helped me find my purpose, my calling, just as she has lived out hers at Penn.

Karen J. Hamilton C’87 is director of communications for Student Registration and Financial Services at Penn.