As she awaited her final race at the NCAA Outdoor Track and Field Championships, Nia Akins Nu’20 looked toward the infield to see Anna Peyton Malizia C’19 clear the high jump bar. Something clicked. “I was like, ‘Let’s go, now I’m ready! Put me on the track!’” Akins recalls.

A couple of minutes later, Malizia watched Akins’ record-setting performance in the 800-meter run. “Seeing her do that, really gave me the energy and an extra push,” says Malizia, who then had another huge jump, clearing six feet for the first time in her career.

All in all, it turned out to be perhaps the greatest day in the history of Penn women’s track and field as Akins was the national runner-up in the 800 (with at time of 2:01.6, a personal and program record), before Malizia finished third in the high jump (at 1.84 meters, or 6 feet, 0.5 inches—also a personal and program record) in her final collegiate meet on June 8 in Austin, Texas. And it all happened in the span of roughly five minutes.

“It was a pretty special moment, for sure,” says Akins, whose run helped the team place 17th overall at NCAAs. To reach it, Malizia and Akins, who both earned first-team All-America plaudits, took somewhat unlikely routes.

Malizia, a Tampa, Florida, native, didn’t start jumping until high school and wasn’t good enough to be recruited by any college programs. Her jumps even got worse early in college as Penn jumps coach Joe Klim “broke everything down to break old habits” before teaching a new technique. Steadily, Malizia improved, winning the indoor and outdoor Ivy League Heptagonal Championships as a junior in 2018 and capturing a Penn Relays title in April.

Akins also had a memorable Penn Relays, leading the Quakers to their first-ever win in the Distance Medley Relay Championship of America (more on that coming in our Jul|Aug issue). That came only a couple of months after she guided Penn to its second straight indoor Heps crown with an Ivy-record time in the 1,000 meters—one of many accolades during a remarkable senior year for someone who only started running in high school in San Diego “to train for soccer.”

As Malizia and Akins both rose to national prominence, they also “gravitated toward each other,” Akins says, even though distance runners and jumpers usually aren’t on the same schedule. They were often roommates during road meets, including at nationals this month. In down time, they watched early seasons of The Office to take their minds off the track. But when they wanted extra motivation, they reminded each other how they hadn’t performed as well as they’d hoped at the 2018 NCAA Championships.

At the time, Akins says, “We both agreed, ‘Next year is going to be the year for us.’”

“This year, it was like, ‘OK, we’ve already been here, now we’re here to actually compete for the title,’” Malizia adds. “It was just a different energy for both of us.”

The last meet of the season could not have gone any better for Malizia, who now faces a difficult decision she didn’t think she’d have to make. With a good investment banking job lined up in Houston, does she completely move on to the next phase of her life and “go out on a high note”? Or does she continue to train and create new goals that include making the US Olympic Trials, or even the Olympics? “In the next couple of weeks, I have to do a lot of thinking,” she says.

The immediate future is more clear for Akins, who Malizia believes is “definitely going to explode” next year and claim that elusive national title (she also finished second at the 2018 NCAA Indoor Championships). Akins admits she was “really upset” just after coming in second place again in Austin, before it hit her that she set a personal record and that it was “a really good day” she got to share with Malizia. But she’s now ready to take the next step and win an NCAA title, while helping the Quakers defend their titles at Heps and continue to emerge as a national power.

“I never thought,” Akins adds, “it would be as tangible as it is right now.” —DZ 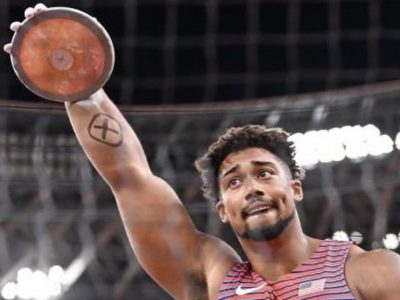