The UVA provost and former Stanford Law dean has been nominated to be Penn’s ninth president.

“One thing that is for certain about Penn—and we made this clear to all the candidates we spoke to—is that there’s nothing broken and there’s nothing that really needs to be fixed,” said Scott L. Bok C’81 W’81 L’84, chair of Penn’s board of trustees, speaking of the search he headed to choose the University’s next president. “But notwithstanding the extraordinary success we’ve had, we want somebody with a lot of ambition to take Penn to the next level.”

Magill’s nomination to become Penn’s ninth president was announced on January 13, with a vote of the full board of trustees scheduled for March 4. With trustee approval, she’ll take office on July 1, succeeding Amy Gutmann, who has served since 2004 [“Compact Fulfilled,” Nov|Dec 2021].

The announcement came a month before Gutmann was confirmed by the US Senate, in a 54–42 vote on February 8, to become the US Ambassador to Germany and officially resigned from her position as Penn’s president. Wendell Pritchett Gr’97—who recently stepped down as Penn’s provost to return to a faculty position at Penn Law—was named to take over as interim president until the start of Magill’s tenure in July.

In the announcement, Bok called Magill an “extraordinarily accomplished academic leader” and “exactly the right person” for the job of Penn president, “one of the most complicated and demanding in higher education.” In her current role at UVA and before that as dean of Stanford Law School, she has gained “valuable experience with the arts and sciences, with a broad range of professional schools, and with an academic health system.”

The statement also pointed to Magill’s “passionate commitment to academic excellence, to diversity, equity, and inclusion, and to student success at both the undergraduate and graduate levels,” as well as her understanding of “the critical role of faculty in teaching and research, which is so important to Penn” and her “long history of engaging with the communities in which her institutions have operated.”

“I am humbled and honored by the opportunity to lead the remarkable institution that is the University of Pennsylvania—and to succeed Dr. Amy Gutmann, who has been a visionary and innovative leader,” Magill said in the announcement. “From its founding, Penn set its sights on making a difference, and 282 years later the Penn community continues to change the world every day through world-class research, teaching, patient care, and service.”

The first woman to hold the office of provost at UVA, Magill has served as the school’s chief academic officer since 2019. A 1995 graduate of UVA’s law school, she was on the law school faculty for 15 years before joining Stanford as the Richard E. Lang Professor of Law and dean of the law school from 2012 to 2019. Her undergraduate degree, in history, is from Yale University, and she grew up in Fargo, North Dakota.

After college and before law school, Magill worked for four years as a senior legislative assistant for energy and natural resources for US Senator Kent Conrad. After earning her law degree, she clerked for two years, first for US Court of Appeals Judge J. Harvie Wilkinson III and then for Supreme Court Justice Ruth Bader Ginsburg, before shifting to academia in 1997.

Magill’s scholarship and teaching focuses on administrative and constitutional law, and she has published in leading law reviews, winning several awards. She is a fellow of the American Academy of Arts and Sciences and a member of the American Law Institute, and has held visiting scholarly appointments at Harvard, Princeton, and Cambridge universities.

As Stanford’s dean, Magill launched new programs focusing on law and policymaking and to infuse a global perspective into the law curriculum; redesigned student life initiatives to emphasize diversity and inclusion; and oversaw the hiring of nearly 30 percent of the law faculty, the largest faculty revitalization in the school’s history.

In a late January interview, Bok, whose term as trustee chair began last July [“Gazetteer,” Sep|Oct 2021], discussed how the consultative committee settled on Magill as the best candidate.

“The committee was an extremely collegial group,” he told the Gazette. “Everybody had their opinions and their input and their ideas, but I think we all very much enjoyed each other’s company and each other’s contributions—and certainly came to a strong consensus view as to the right decision.”

By “sheer luck,” the group was also able to complete most of its work “face to face” rather than virtually, he added. “A lot of the search occurred during that window between when Delta was fading and before we ever heard the word Omicron, and so almost all of our important meetings with candidates were in person.”

Last fall Penn community members were invited to offer suggestions to inform the committee’s work via an online form or through email. The comments mostly echoed the themes and characteristics the members had developed among themselves, Bok said. “But we certainly read all the contributions that were submitted.”

The pool of potential candidates for a job like the Penn presidency—which at minimum requires senior-level leadership experience at institutions of comparable stature and complexity—“is somewhat of a finite group,” Bok explained. “And so, you’ll look at that whole group. I think it was very thorough.” The committee was also supported by an outside search firm, which was “very helpful in making sure that we left no stone unturned.”

While there are “many talented people out there in the world of academia,” Magill’s mix of experience, leadership skills, and personal qualities made her “a pretty unique candidate,” Bok said. Virginia and Stanford match up well with Penn—high-quality institutions that are similar in scale, mix of professional schools and “a core liberal arts offering,” and affiliated health systems.

As UVA’s provost, Magill has also “had management experience even through this terrible pandemic,” Bok added. In general, “being a provost is kind of like serving in dog years, I think, where every year is like about seven years of work to get through.”

In addition to the professional experience she brought to the table, Magill “just has a terrific reputation.” From the US Senator she worked for after college, to fellow law professors, to staff who worked for her and the presidents of the two universities where she has spent her academic career, “people really universally acclaimed her skills and talent, but also her personal qualities that make her just a really great person to work for, a great person to be colleagues with, a great person to solve problems with,” Bok said.

By the time the committee had settled on their choice, the Omicron wave of the pandemic was in full swing, which made a traditional public event announcing Magill’s selection impossible.

With cases falling again as the Gazette was going to press in mid-February, the “hope and expectation” was that this would be remedied at the March meeting of the board of trustees, with Magill attending in person for the vote as well as meeting socially with the trustees and senior leadership.

Choosing a new president for an institution like Penn is always a momentous decision, and especially so “when you’re seeking someone who can replace a really sort of iconic leader,” which in terms of achievement and longevity in the job certainly applies to Gutmann. “All of our candidates, I would say, were somewhat humbled by the challenge,” Bok said.

“We’ve heard from so many people since the announcement, who had contact with Liz over the years in one way or another, and it’s just so clear we made a wonderful choice,” he added. “Amy Gutmann is leaving very large shoes to fill, but I think we’ve done the best we possibly can at finding somebody who can really fill those shoes and take Penn to even greater heights.”

Asked by the Gazette about her impression of the search process, Magill talked first about the “deep love and admiration for the institution” that came through in her interactions with committee members and Penn graduates. “I’m obviously pleased with the result of the process,” she said. “I feel like I’ve received the largest bear hug in the history of the universe.”

Magill said she began with “just a wonderful impression of Penn as a remarkable institution” located in “one of the best cities in the world, in my opinion.” Though she’s never lived in Philadelphia herself, “I have lots of friends who teach there, have gotten their graduate degrees there, and I’ve always loved Philly.”

(Magill is married to Leon Szeptycki, a UVA law professor and associate director of the school’s Environmental Resilience Institute, and they have two adult children—who “will be visiting a lot, I hope,” she said. Szeptycki will be moving to Philadelphia at some point, and in the meantime Magill hopes their dog Olive—“the best member of the family”—will take up residence with her in the president’s house in Eisenlohr Hall.)

As she went through the selection process, talking to people “and doing my own study,” Magill said she gained a deeper understanding of the “DNA of the place” as one that “wants to use what it does to better society,” which Penn was focusing on before many other institutions explicitly took up that mantle. “The other part of the DNA that I really admired was the mix of pragmatism, creativity, and humanity, which is I think sort of unusual—a commitment to deep learning and a commitment to acting on what we learn, and training students to be able to do the same.”

Finally, “there is excellence without a trace of self-satisfaction or complacency,” she said. “I believe I’m coming to a place that wants to know ‘What are our next big ambitions?’ And again, I think that’s a little bit rare—to be as exceptional as Penn is across all of the missions that it has—and its role in West Philly and the city of Philadelphia—and still be thinking about ‘How can we do better? What’s the difference we can make tomorrow?’”

Magill was deeply engaged in UVA’s response to the pandemic, which had a profound impact specifically on teaching and research. She compared the virus to “a roving, ever-changing hurricane that just keeps going on. Those sorts of weather events lead you to shut down classes and things like that. I played a big role because of the role the provost has in delivering the academic mission, and it was also an all-hands-on-deck situation.”

She suggested that the speed with which Virginia, Penn, and other institutions moved thousands of classes online, while setting up testing protocols and other requirements needed to keep campus communities safe and functioning, should dispel some common assumptions about American higher education. “We can do things quickly, nimbly,” she said. “We can change what we do and change how we do it.”

Looking ahead to the March trustees meeting, Magill admitted she was “very much hoping for a real live walkabout and in-person conversations and meetings,” but “this pandemic has thrown us a lot of curveballs, and we have had to roll with them.”

Prior to starting her administration in July, she expected to begin meeting with Penn’s deans and vice presidents, student leaders, and representatives from various Philadelphia community groups that work with Penn in one way or another. “I like to immerse myself in a place, and so I think I will be in the process of listening and learning a lot in the first couple of months—but doing that very actively,” she said.

“I just can’t wait to get started. I feel like this is the opportunity of a lifetime. There’s so much that Penn has been, that it is right now, and I think will be in the future, and I’m just really excited to help lead that effort.” 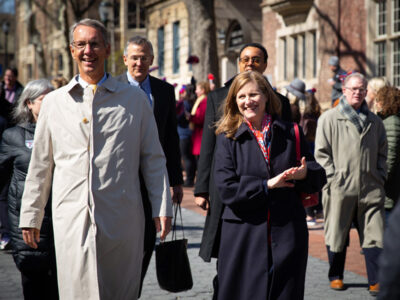 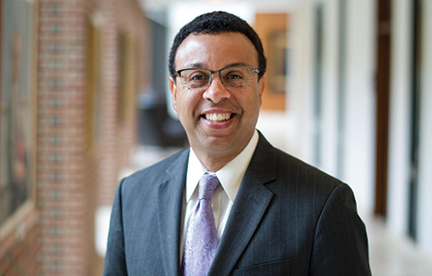