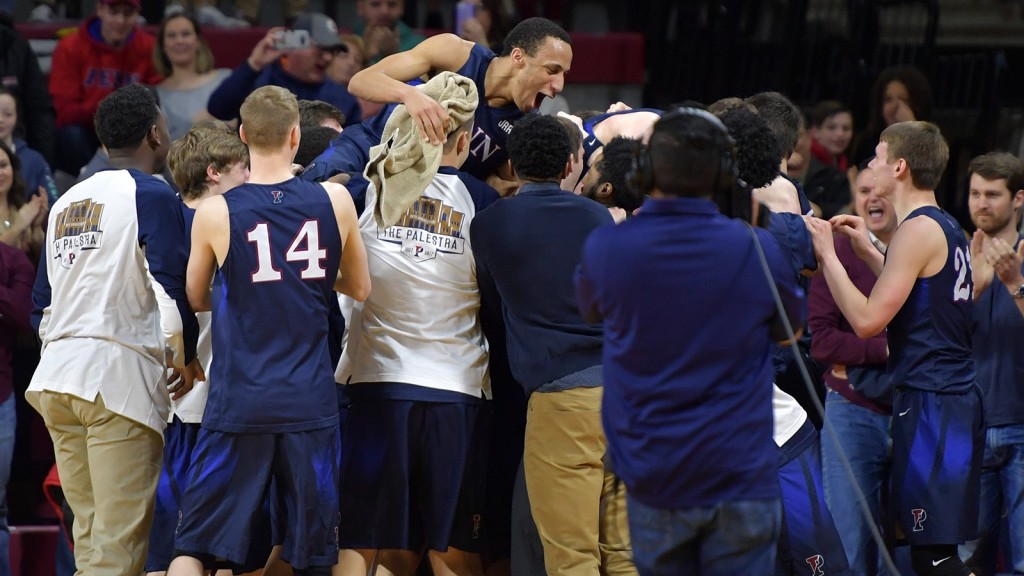 It’s been 15 years since the Penn men’s basketball team started 2-3 in the Ivy League and its NCAA Tournament hopes seemed lost. But against all odds, and fueled by some improbable and dramatic moments along the way, the Quakers reeled off nine straight wins to force a three-way tie atop the conference before prevailing in the only Ivy League tournament that existed at the time: a makeshift one.

Until this season, it would be hard to imagine resurrecting a season in any more dramatic fashion.

With the new four-team Ivy League Tournament offering newfound hope for teams that start slow, Penn managed to overcome an 0-6 start in league play to keep its season alive on the final game — and final shot — of the regular season in last night’s thrilling 75-72 win over Harvard.

And now, as the Quakers prepare to add another chapter to their storied rivalry vs. Princeton by facing the top-seeded Tigers in the first game of the inaugural Ivy League Tournament, there will be many people who question the fairness of a 6-8 team like Penn getting the opportunity to knock a 14-0 Princeton team out of contention for the Big Dance.

But there’s no denying that a conference tournament where only half of the teams make it created the kind of unbelievable drama that this league has rarely seen on the final weekend of the regular season. Just take a look:

A Shot for Palestra Lore

Jackson Donahue hadn’t even attempted a shot when he checked into the game for Penn’s final possession. And yet, the sophomore sharpshooter said he knew it was going in as soon as he caught it the ball. How delightfully brash!

The truth is, many Penn fans may have expected the worse after the Quakers had lost their last two games in the final possession, including a devastating defeat to Dartmouth the night earlier when Darnell Foreman failed to get a good look at the end.

But against Harvard, after Foreman fouled out, Penn head coach Steve Donahue brought in a cold Donahue, who proceeded to drill a DEEP three-pointer right in front of him to break a tie and send the Quakers into the Ivy League Tournament in front of an elated home crowd.

It will certainly go down as one of the biggest shots in Penn basketball’s recent history. Watch it again and again.

Former Penn basketball coach Fran Dunphy used to say how much he dislikes senior night because everyone gets so emotional before the game and it’s hard for seniors to play well.

With the end of his college career looming, Howard poured in a career-high 24 points to go along with 12 rebounds and three blocks to lead the way.

Quite simply, it was the best game Howard ever had at Penn. And now he gets to play at least one more and enjoy the March Madness experience that a decade’s worth of good Penn players did not get the opportunity to have.

How ‘Bout Those Kids?

We all know how good AJ Brodeur is, even if he’s had some ups and downs during his freshman season. A more recent development is the dynamic freshman core of Brodeur at center, Ryan Betley on the wing and Devon Goodman running the point.

Against Harvard, all three were on the floor together in the game’s most crucial moments with Betley logging a game-high 37 minutes and Goodman making some critical plays, including a late 3-pointer, a huge steal and layup, and the assist to Donahue on the game-winning shot.

It seems clear all three players will have a huge role on this team for the next three years, and getting high-pressure March moments like this will only bolster their development.

The Path to the Palestra

As Philadelphia Inquirer college basketball writer Mike Jensen tweeted last night, “They can play the Ivy tournament for 100 years and a school might not take a crazier path than the one Penn took this season.” And he’s probably right.

Consider: the Quakers showed some nice potential with a couple of solid non-conference road wins at UCF and La Salle. They sputtered at the start of league play with six straight losses. Steve Donahue settled on a rotation and they rose from the dead with five consecutive wins, including a wildly impressive victory at defending champ Yale. They lost two straight heartbreakers, the first to the Columbia team they were battling with for the fourth and final spot. And still, with all sorts of weird tiebreaker scenarios out there that even confused Donahue, it ended up turning out that all they needed was a win vs. Harvard in their final game to clinch the final spot. And they delivered.

The critics who don’t think the Ivy League should have created a tournament will still make their voices heard. But, in terms of drama and redemption storylines, Penn’s 2016-17 season had to have been just about perfect for the tourney architects.

Donahue feels uncomfortable calling the Ivy League Tournament a home game, even though it will be in the Palestra. And the Ivy League execs will do everything they can to create a neutral environment.

But the fact remains that it would have really stung for the Quakers not to be involved in the first-ever Ivy League Tournament when the games were being played on their campus — which the Penn coach did admit was a source of motivation.

So, here we are: Penn, Princeton and the Palestra. With an NCAA Tournament berth on the line.

Bring on some more madness.