When who you are depends on how many names you use.
By Samuel Yellowhorse Kesler

My name is like one of Al Jaffee’s MAD magazine fold-in cartoons: take away the middle part, and you get something completely different than the picture as a whole. During my first weeks at Penn, I got emails from Jewish student clubs expressing hope that I might join. I am not Jewish, but Samuel Kesler is a Jewish name. Meanwhile no emails whatsoever arrived from the Native American club on campus, though I have been half-Navajo all my life.

I don’t exactly give off “Native vibes.” Most people guess Asian. One time, a girl asked if I was Latino, and when I said, “No,” she responded, “Are you sure?”

Usually, however, responses range from a revelatory “Oooohhh…” to an intrigued “That’s so cool!”

There’s plenty in between. “Do you go to college for free, then?” some people ask. (No.) “Do you exploit it?” (No?) Then there are those who exclaim, “Oh, me too! I’m one-sixteenth Cherokee!” Which is a whole ’nother box o’ worms.

The half-white part of me is definitely more evident. I still have some features people can’t quite place, but if I don’t include my middle name in introductions, I can pass for white. It’s like magic.

There are plusses and minuses to this. For instance, if you check the box that identifies you as Native American, some say that makes you more likely to get into college—even if when you get there you look as white as the next kid who entered by some less exotic route. I imagine that when I applied, someone at admissions screamed, “We got one!” like the secretary in Ghostbusters.

And passing can yield strange insights—like when your friends toss off racist jokes in casual conversation, thinking they don’t have to worry about offending anyone. Imagine a sort of camouflage, where you dodge the direct offense but get the sneakier stuff.

Having grown up in the suburbs of Arizona rather than on a reservation, I was never too tied up with my heritage. I would attend the occasional powwow but never learned much about our history. My knowledge of Native culture is about as strong as anybody who’s read The Absolutely True Diary of a Part-Time Indian. It’s nobody’s fault; my mom did the best she could to teach me and my siblings about our culture growing up, but we just weren’t immersed in it. And when for the most part you look like everybody else, there’s not much of an expectation for you to live up to a heritage you never really knew.

Setting expectations for myself is no easier. The worst part of passing is feeling helpless in the face of injustice against Native Americans who cannot so easily pick and choose how other Americans view—and therefore treat—them. I’m not the sort of person who likes to confront people with uncomfortable facts, like a recent study that found that over 500 Native American women were reported missing or murdered across 71 cities, some of whose record-keeping practices may systematically undercount crimes against Native people. I don’t feel qualified to explain the voter suppression saga in North Dakota, where a law threatened the voting rights of thousands of people on reservations because they use P.O. boxes rather than street addresses. And I am by no means one who can fully explain what happened in Washington between those Native American marchers and that group of Catholic schoolkids—an episode that was lamentable on so many levels, but mostly because it constituted the height of Native American visibility in the recent public eye, if you don’t count Johnny Depp in The Lone Ranger. The best I can do is act as a reminder within my social circles of the plight of Native Americans—though I can’t escape the feeling that I lack the qualifications for even that modest role.

When I began writing for a student publication, its masthead listed me as “Sam Yellowhorse Kesler.” Nobody else had their middle name listed. It might have been a clerical error, but I asked them to remove it anyway. I felt like they were using me to telegraph diversity. Then I read an interview Native musician Black Belt Eagle Scout did with The Fader. When asked if she felt anxiety about being tokenized, she responded, “No. And it’s because so many people in United States think that Native people don’t exist. So many people think that Native people are all dead.”

I realized that I needed to be here, to wear my middle name up front, to show my peers that we still exist. But it is weird enough to feel like a token minority—let alone one whose connection to Native culture is as tenuous as mine. So I find myself in a sort of no man’s land. Any personal success I have inevitably makes me think about Navajo folks who lack the opportunities I’ve had, who are still stuck on the reservations. Then I wonder what it means that I think of reservations as someplace to be stuck. Have my advantages given me a duty to dedicate my life to fixing everything wrong with the way our country treats Native Americans? Or can I pretend that all I can do is search for my own success, and that will be enough?

When my full name gets used, I feel a sense of pride, but also responsibility. Suddenly I have to be the one to remind everyone around me that Native Americans, well, exist. Plenty of people never really expect to meet a Native American face to face. I’m not exactly what they have in mind, yet when I tell people my middle name is Yellowhorse, I become their cultural touchstone. I’m their Hawk from Twin Peaks, their Johnny Depp in brownface, their part-time Indian. And honestly, I can barely sell it as well as any of those guys.

As I’ve become more comfortable at Penn, I’ve also become much more aware of my privilege. I’ve grown up able to blend into any crowd of white students, and reaped all the benefits that society gives unto those who possess such an ability—but also reaped the benefits of being a Native American on paper. After all, it just takes checking a box and you get into college easier; that’s what they say, at least.

All these contradictions produce a mix of feelings that nobody taught me how to handle. Feeling that I have somehow betrayed my heritage. Fretting that I don’t do enough for Native culture—or that even if I do, my whiteness simultaneously undermines my efforts. Wondering if I got my place here because of my middle name. Or conversely, that I only am where I am because I pass for white. Wondering if I should wear my name proudly, or hide it away. Worrying about being a token. Wondering whether or not to say “we” or “they” when I talk about Native Americans.

The more I accept my place here, the more remorse I feel for those who can barely afford a basic life in this country, whose continued presence has been swept under the rug by the same nation that stole their land. There should be a word for Survivor’s Guilt on top of Imposter Syndrome. My heritage is not “cool,” it’s not a “fun fact,” and it’s not a free pass for college. The truth is I’ll never really know what it is. 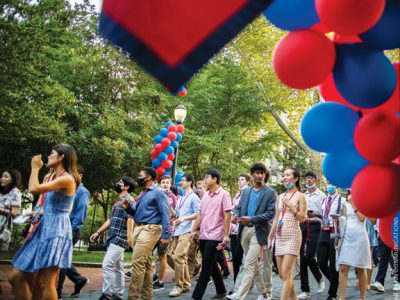