Driverless Cars: the City’s Savior, or its Doom? 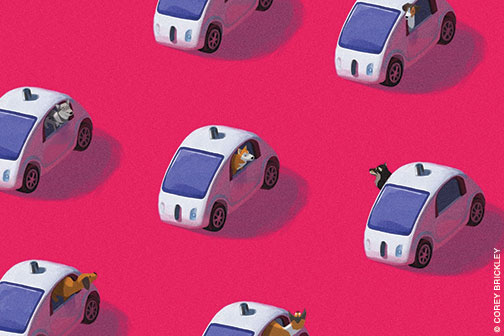 About a hundred years ago, during a different golden age of US cities, the advent of zoning laws and subways changed the way Americans experienced urban life. The 21st century may be even more transformational, but the critical forces figure to be quite different: robots, Big Data, and the “internet of things”—which are widely expected (by futurists, at any rate) to upend everything from street lighting to garbage collection. A recent Penn Institute for Urban Research (IUR) colloquium titled “Automation and the Future of Cities” focused on what many believe is the biggest change on the horizon: driverless vehicles.

The event featured four presenters whose backgrounds ranged from robotics to regional planning. It was co-sponsored by the Consortium for Technologies for Safe and Efficient Transportation, which Penn leads with Carnegie Mellon University. Penn IUR co-director Eugenie Birch moderated a panel discussion following the presentations.

Vinn White, a senior policy advisor in the US Department of Transportation, began by reviewing a recent DOT forecast called Beyond Traffic. It considers transportation’s impacts on phenomena as wide-ranging as consumer buying habits, climate change, mortality rates, and income inequality.

Many of these impacts are negative. The average metropolitan auto commuter now spends about 40 hours a year stuck in traffic, White remarked, while nearly 100 people die in motor vehicle crashes every day. In 2012, transportation accounted for 28 percent of US greenhouse gas emissions, making it second only to electricity consumption. And the average American spends more money on transportation than anything but housing.

Technological innovations, White contended, will help. Autonomous cars, for example, could reduce traffic fatalities, since more than 90 percent of collisions stem from human error. (The rest arise from factors such as equipment failure and poor road maintenance—though some experts hold failures of traffic engineering responsible for a substantial share of human-caused “accidents.”)

Self-driving vehicles could also arrive on the scene in time to meet an increased need for professional drivers, White said. The American Trucking Associations predicts a shortage of 890,000 haulers by 2024, as rising demand intersects with a wave of drivers reaching retirement age.

But is the technology really that close? Not quite, said Daniel Lee, the UPS Foundation Chair Professor and director of Penn Engineering’s GRASP (General Robotics Automation, Sensing, Perception) Lab.

“The internet of things will be everywhere,” he conceded, with street lights, cameras, bus stops, and speed-policing radar all connected, resulting in greater control and lower energy usage, more security and less traffic. And there is no doubt, he said, that innovators like Google, Uber, Apple, and Tesla are investing heavily in autonomous vehicles (and snapping up Penn Engineering grads, he added, to help them get to the finish line).

Lee flashed a few slides demonstrating an autonomous car built by his lab in 2007, which successfully navigated a 60-mile obstacle course [“I, Robot Car,” Gazetteer, July|Aug 2007]. But he warned that technology still lacks many of the capabilities we take for granted in human performance. As a comical illustration of that point, he presented a video of a robot attempting to fold a towel—on fast-forward, since the task had taken 15 minutes to complete. Lee also noted that because autonomous vehicles rely so heavily on sensors, adverse weather conditions could wreak as much havoc on their navigational success as they do on a human driver’s.

No wonder the next presenter, Erick Guerra, an assistant professor of city and regional planning at Penn Design, seemed skeptical about autonomous vehicles.

“Not only is the technology uncertain,” he began, “but so are the behavioral responses to [it], as well as the regulatory [ones].” For starters, he pointed out, the average vehicle turnover is 11 years. And even if autonomous cars become more common, he added, there’s a risk that their popularity will be self-defeating. “If you make it easier to be in a car, almost certainly people will be in cars more,” he said, dooming the dreams of decreased traffic and gas consumption.

As for regulatory preparedness, Guerra said that some lawmakers have used the prospect of autonomous vehicles to justify delaying investments in projects like road expansions and light-rail lines. (Overall, though, according to a recent study from the National League of Cities, only six percent of the country’s biggest cities have considered driverless cars in their long-range plans.)He predicted that the “likely first moves” for implementation of driverless vehicles will be limited to taxi fleets, freight hauling, closed facilities like airports, and public transit. We might also soon see automated-vehicle-only highway lanes, he added.

Megan Ryerson, an assistant professor of city and regional planning, drilled down for a closer look at the implications for regional travel, homing in on auto trips of less than 500 miles.

Even along such well-established rail routes as Amtrak’s Northeast Corridor, the car reigns supreme, she observed. A full 86 percent of trips between Philadelphia and New York City are by car—a testimony to the importance of the so-called “last mile problem” for travelers who insist on door-to-door transport. Could driverless vehicles make for a more palatable form of public transportation to solve that problem? Ryerson, who has conducted surveys on the topic, said that “no one is really that excited” about switching between multiple modes of transportation in a single trip.

And even if they catch on, driverless vehicles will not necessarily result in fewer cars on the road, she said, echoing Guerra’s doubts. “It’s possible that if we replace rail or air trips with very, very many vehicle trips—and if vehicles are similar to the profiles we have today—that we’re looking at greatly increased emissions,” Ryerson said.

At the same, she added, regional airports—“the economic engines for small cities”—might disappear, threatening convention and tourism business in some places.

In Ryerson’s view, the future of autonomous vehicles may ride on the habits and preferences of the technology’s likely first adopters: the Millennials, who thus far have not bought cars in the numbers their parents did. As Vinn White noted, this cohort is far more enamored of another liberating technology: the smartphone.

Asked to pick either a cellphone or a set of car keys, Millennials select the former, White said. And smart phones can easily answer questions like, “Are the buses running on schedule? What time is the flight? How many bicycles are in the bike-share unit around the corner?”

The upshot? If autonomous cars become something to breach that last mile from the train station, city living could get better (and cleaner) still. If, on the other hand, they turn every long commute into a prime chance to binge-watch Girls episodes while texting a BFF, hard times may be coming to a smoggy downtown near you.