Meet the up-and-coming jewelry designer who’s ready to “be on the cover of Vogue.”

Jameel Mohammed C’18 didn’t sleep much in September. At the beginning of the summer, the 24-year-old jewelry designer was tapped to make custom pieces for the film Coming 2 America, an upcoming sequel to the 1988 comedy about an African prince played by Eddie Murphy.

The fictional royals need to look good on the big screen, so Mohammed worked night and day in the Harlem apartment he shares with five roommates to make the treasures. For the Queen of Zamunda (the film’s fictional African nation), he concocted a brooch with a lion’s head on it. “It is inspired by some Versailles necklaces,” he explains. For Prince Akeem—Murphy’s character, which the legendary comedian will reprise for the sequel—Mohammed made an elaborate red-and-gold necklace with strings of beads hanging off. “With all the pieces I start with a sketch,” he notes. “Then we make a 3-D model, print that, make a casting, and then polish it.”

Mohammed may still be in disbelief that he’s helping bring a major Hollywood film to life. “Don’t let me neg myself,” he says. “It’s real that I am designing jewelry for Eddie Murphy.” But it’s clear that he’s an ideal fit for the project.

Mohammed’s jewelry collection, named Khiry (his middle name), is inspired by the African diaspora. Some of his first creations were modeled after the cattle horn, a symbol of wealth and value for the Dinka people in Sudan. One of the items for the movie reflects Sudanese capes that are traditionally adorned with beading and fringes. (Though he’s never actually been to Africa, he spends a lot of time reading books and looking at historical images of the continent.)

Mohammed first started designing jewelry from his dorm room at Penn, and he’s already made his mark on the fashion world. While he was still an undergraduate, his collection was sold at Barneys New York. This past summer Alicia Keys wore his line to a gala. Solange wore it to a magazine shoot. Halsey showed it off at the Met Gala.

He’s been featured in the New York Times as well as Teen Vogue, Essence, and Vanity Fair. His jewelry is sold at some of the country’s top stores, including McMullen, a luxury boutique that just opened a location in Palo Alto, California.

Still, Mohammed is hungry for more. “Yo,” he says. “I’m going to be on the cover of Vogue.”

Mohammed’s love of fashion started in seventh grade, after moving from the South Side of Chicago to Oak Park, a majority white suburb. “I really stuck out in a lot of ways,” he says. “I was tall. I was awkward.”

One day, his fashionable aunt came to visit and took him shopping at J.Crew. “I thought it was a style intervention, but it really was a self-confidence intervention,” he says. “It totally changed the way people treated me. … To think that something that came from a shelf could have such a big impact on my day-to-day experience, that was the moment I really got interested in fashion.”

The summer before high school, he painted sneakers and sold them to fellow students and teachers. “I charged 60 bucks a pair, not including the cost of the shoes,” he says. “It was way, way too low.” He took those lessons about “cost-based pricing” with him to New Hampshire, where he attended Exeter, a private boarding school. There he connected with alumni who helped him secure internships with the fashion brands Nicole Miller and Narciso Rodriguez.

Not long after arriving in Philly, Mohammed attended a talk by Daniella Vitale, the CEO of Barneys, during Penn Fashion Week. Sitting in the front row, he asked how a designer gets into Barneys. Her response, as he recalls: “Show us what you got.”

“He was never afraid, when we had an event, to go up to the speaker and pull out his collection,” says Susan McMullen, the director of alumni and student affairs at Wharton’s Baker Retailing Center. “He did it with Stuart Weitzman [W’63]. He did it with Andrew Rosen, the CEO of Theory. Some students are much more timid.”

Mohammed soon traveled to New York to show Vitale his sketchbook of clothing designs. But it was the necklace he was wearing—which he had made in high school—that caught her eye. Barneys offered him an internship, and then later, in 2017, agreed to sell his jewelry line in its store.

His idea to theme Khiry after the African diaspora was honed by multiple experiences at Penn, including a class he took with political science professor Robert Vitalis, which he says made him think about power structures and injustices around the world. A big moment came when he traveled to Japan on a Wharton trip and met the CEO of LVMH Japan, who said the only true luxury brands come from Paris and Milan. “I was like, ‘OK, we need to address these colonial structures,’” he says. “I am a black person with an inordinate amount of access and privilege. I need to say something with my work.”

Because he was spending so much time focusing on his jewelry, Mohammed ended up dropping out of college before his senior year. The decision could have been seen as a risk, since it’s not easy to make a living as a jewelry designer, says Ann King Lagos, who owned Lagos Jewelry with her ex-husband and now has her own line, Realm. “Even if you get Kim Kardashian to wear your piece, you have to be ready to capitalize on that,” she says. “You have to have your social media ready to go. You have to be able to make new orders and pay for those items up front. It’s not just about making jewelry and getting it in a store anymore.”

Mohammed is still figuring out his business strategy. Even when his line was at Barneys, he was working on consignment, which meant he only got paid when something sold. It took him two years to sell enough items to afford to make new ones. (His partnership with Barneys recently ended, and the iconic department store retailer was sold in November after filing for Chapter 11 bankruptcy protection.)

He believes custom designing, like what he is doing for Coming 2 America, could be a profitable path forward. He’s been getting more commissions, and he also recently launched Négritude, which he calls, “the black luxury goods answer to Goop.” It’s a website that tells the story of black designers and leaders (of course, they are wearing his products in the photo shoots) and curates collections of luxury goods made by the African American community.

“It will allow more people to interact with my brand,” Mohammed says. “The plan is for people to read the site, and then a certain percentage of people will convert from reading to shopping.”

Mina Fader, the managing director at the Baker Retailing Center who remembers Mohammed’s “intensity” and “passion” at Penn, believes it’s a smart idea. “When you are talking about the African diaspora, you need to show your commitment with your actions, not just your words,” she says. “This adds credibility to what he is doing.”

It also might lead to him attracting even bigger names. “If I could design for anyone, it would be Michelle Obama, Rihanna, and Beyoncé,” Mohammed says. Then, the confident jewelry designer adds, “Let’s put this into the universe … my big moment is right around the corner.” 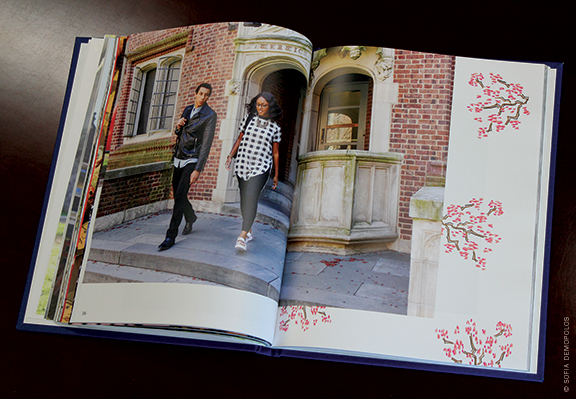