Cleaning Up the Planet

How one start-up plans to turn unrecyclable plastic trash into valuable chemicals.

Recycling is nice, but it’s not likely to save the planet from our plastics addiction. Even if your used plastic bags and cartons make it to the right can, that doesn’t mean companies are willing to take on the expense of processing them.

That’s why Miranda Wang C’16, the 24-year-old founder of the California-based start-up BioCellection, is developing another solution: breaking down our grocery bags and bubble wrap into valuable base chemicals that can be incorporated into clothing, shoe soles, and even medicine.

Each year, humans produce more than 300 million tons of plastic. Most of it—91 percent—isn’t recycled. Instead, it’s often shipped off to landfills, where it could take up to a millennium to decompose. Or it ends up blown across cities and into oceans, where it harms marine animals and other living organisms.

“What happens if this plastic production doesn’t stop, and it increases?” Wang says. “How do we deal with it so it doesn’t damage our planet?” The current methods for recycling plastics are often made difficult by contamination and a complicated sorting process. Many manufacturers find that it’s cheaper to start from scratch, which only exacerbates the waste. Wang adds that, given the world’s already massive consumption, banning plastics “is clearly not going to be feasible.”

By producing valuable chemicals from plastics, BioCellection hopes to make recycling more profitable. Their process uses a catalyst to break down polymers, the long chains of molecules that make up plastic. The result: a white powder of organic acids, made of molecules containing 10 or fewer carbon atoms. The powder looks like table salt, but when combined with another chemical, called diamine, it can be used to create the nylon found in clothing fiber. Wang argues that BioCellection’s process could be an alternative to producing nylon from petroleum.

The company’s chemicals can be used to produce more than just textiles, and could be incorporated into car parts, cables, and adhesives. With high enough purity, the chemicals could even be used in food, medicine, and skin care products.

Right now, Wang is working on incorporating BioCellection’s unique chemical process into a demonstration machine to prove that the method could work on an industrial level. She anticipates that the machine—which should handle about 25 kilograms of plastic a day, roughly the equivalent of 2,500 to 5,000 grocery bags—will be completed at the end of the year. “Essentially, what we have is a series of chemical reactions,” she explains. “We’re scaling it up into an automated machine system.”

Wang’s work with plastics began in Vancouver when she was a high school junior. As president of her student environmental club, she organized a trip to a local waste facility, where she had an “overwhelming feeling that every single wrapper that every individual consumes ends up here, and takes over this place,” she remembers. “You’re looking at this flow of material, all this garbage that smells terrible, being dumped into pits, things being compressed.”

Motivated, Wang started searching for alternatives to traditional recycling. She and her best friend, Jeanny Yao—who became BioCellection’s co-founder and chief operating officer—reached out to a University of British Columbia professor. With his help, they began researching whether bacteria harvested from river soil in Vancouver could be used to break down plastic.

“They have chemical interactions with the plastics. They break it down, they eat it,” Wang says. “That was the first step because it made me realize that maybe there are answers, encoded in science.”
In 2012, Wang headed off to Penn, and Yao began studying at the University of Toronto. But their work continued. They delivered their first TED Talk, based on the research they’d done in high school. Wang spent some time investigating the impact of plastics on hormones. In college, she found herself spending weeks in the lab, researching plastics. On weekends, she often attended events for environmental activism. “This plastics thing was constantly a source of interest for me,” she says.

In 2015, during their junior year, Wang and Yao were offered a $50,000 investment through SOS Venture (now SOSV), a venture capital firm headquartered in Princeton, on the condition that they start research at the firm’s lab in Cork, Ireland. BioCellection was officially formed, and the two headed to the Emerald Isle for the summer. There, Wang and Yao wrestled with how to build a commercial product from recycled plastic, one that could make a real dent in plastics pollution. “How do you, from a scientific perspective, get rid of plastics, and what would you turn it into?” Wang asks, adding that two of the biggest questions were who would pay for getting rid of plastics and who would buy a product made from plastic waste. Wang and Yao played around with several ideas, including one plan to use plastics-degrading bacteria to produce protein for feeding fish.

After returning to Penn, Wang continued to refine BioCellection’s technology and business model. There, BioCellection became the first undergraduate team to win the Wharton Business Plan competition. By graduation, Wang had collected more than $150,000 in competition awards, and $600,000 from other investors. “We liked that it was an environmentally friendly solution to plastic pollution,” says Luis Garay WG’16, who met the BioCellection founders at Wharton, before signing on as an advisor and investing in the start-up. He added that BioCellection could make money not only by selling valuable chemicals but also by charging companies to dispose of plastic waste, the way landfills do.

With that funding, BioCellection headed west to the Bay Area, where they rented a lab and set up shop as a biotech company. There, they returned to science literature, where they explored chemical methods—instead of bacteria-based ones—that could be used to break down plastics. Wang thought that BioCellection could build on what previous researchers had found and scale the process into a business. BioCellection brought in chemical engineers and began building a suitable chemical process. Wang and BioCellection have since earned even more recognition, racking up a slot on the Forbes 30 Under 30, an award from the United Nations, and, last November, a $100,000 cash prize from UCLA.

While Wang and Yao are hard at work building their industrial machine, BioCellection is also in talks with chemical buyers. Last August, the company announced that it had partnered with GreenWaste Recovery, a waste hauling and processing company, and the city of San Jose, to begin a three-phase pilot program.

“We’re now finalizing this final reaction, and working with engineering companies to scale this up,” Wang says. “At the end of the day, this system is going to run 24-seven.” 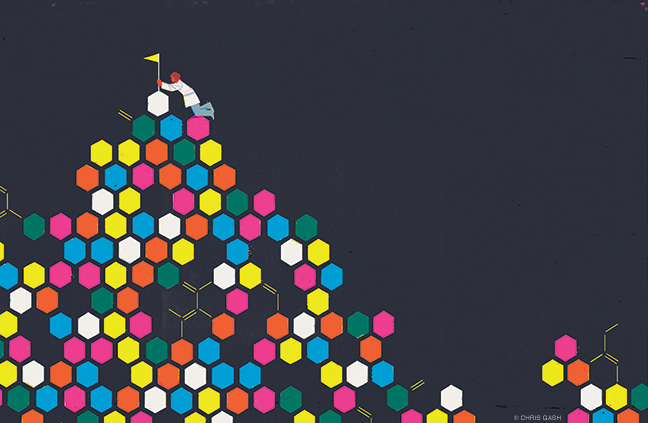