For someone who spent 35 years working to improve people’s quality of life, taking a leadership role in the death industry might seem like an odd move.

The job opportunity gave Nancy Goldenberg GCP’80 brief pause, too, before she joined Laurel Hill Cemetery and West Laurel Hill Cemetery & Funeral Home in 2018 as their first female president and CEO. “After thinking about it, I realized, ‘Wow, this is everything wrapped up in one for me,’” Goldenberg says. “Pretty much the only thing I hadn’t had experience in was the death industry, which is actually very interesting, creative, and innovative. And it’s all about the use of land. So I’m really loving my job.”

A native of Cincinnati, Goldenberg earned an undergraduate degree in urban planning from George Washington University and a master’s in city and regional planning from Penn. She held executive positions at the Center City District, Center City District Foundation, and the Pennsylvania Horticultural Society, where she used her passion for public space development, environmental conservation, and historic preservation to become a dynamic figure in Philadelphia’s urban planning scene.

At Laurel Hill cemeteries, she oversees a combined 265 acres of land—which represent much more to the community than a final resting place. Visitors can view an open-air art collection in the forest of sculptures and monuments, stroll through winding paths in a thriving arboretum setting, and learn about Philadelphia’s historic past. Tours and events are offered throughout the year, and joggers, dog walkers, bicyclists, and photographers are welcomed throughout the unique public green spaces.

Founded in 1836, Laurel Hill is one of the few cemeteries in the US designated a National Historic Landmark. Among those buried there are Civil War Union general George Meade, six Titanic passengers, Philadelphia Phillies Hall of Fame broadcaster Harry Kalas, and pioneering refrigeration engineer Mary Engle Pennington Gr’1895 [“Old Penn,” this issue]. Kalas’s grave is one of the most unconventional, featuring stadium seats from the Phillies’ old ballpark and a headstone topped by a large microphone. Tombstones for Adrian Balboa and Paulie Pennino used in the Rocky movies can also be found on the grounds. At West Laurel Hill Cemetery, founded in 1869 in nearby Bala Cynwyd, visitors can pay tribute to R&B singer Teddy Pendergrass and renowned sculptor Alexander Calder. West Laurel Hill also has a pet cemetery.

One of the first rural cemeteries in the country, Laurel Hill was marketed as a place to escape city life and its industrial pollution—though that pastime fizzled when public parks were established. “The whole notion of being in a landscape with the dead changed. It wasn’t something that people felt comfortable with anymore,” Goldenberg says. “But I think that’s changing.”

The pandemic helped reintroduce the idea of a cemetery as a public recreational space. More than 40 percent of the number of visitors the cemeteries typically see in a year arrived during the first two weeks of the COVID-19 shutdown in 2020, many of whom were discovering the sister cemeteries for the first time.

In addition to navigating the rise in visitors, Goldenberg has guided the organization to a number of firsts, including continuing the work to create a sanctuary for green burials at West Laurel Hill. Green burials require remains to be buried by hand directly into the ground in a biodegradable container or shroud. No machinery is used to dig the hole, no individual headstones mark the graves, and landscaping is minimal and low maintenance. “If you look at it you’ll just see a beautiful meadow of native wildflowers,” she says.

In the process of developing the sanctuary, West Laurel Hill became the first cemetery in the world to receive a Gold certification under the Sustainable Sites Initiative (SITES), a program for designing, developing, and maintaining sustainable landscapes. Green burials have proved so popular that Goldenberg says she’s overseeing the creation of a similar sanctuary at Laurel Hill.

Goldenberg also initiated a groundbreaking project to illuminate various cemetery monuments that are the most visible outside of the cemeteries. “We were the only major historic entity in the city that was not lit,” she says, adding that the lighting “is quite lovely and subtle and, at the same time, brings awareness that the cemetery is there and is part of the civic culture of the city.”

As one of the few female heads of a major cemetery in the US, Goldenberg represents an important first, too. “It’s a very male-dominated profession and I think that’s changing,” she says. “I am very proud to lay the groundwork here.”

Goldenberg’s biggest ongoing challenge is both administrative and psychological—bringing Laurel Hill, West Laurel Hill, and the funeral business together as one entity in practice and in peoples’ minds. Accordingly, a rebranding initiative is on the way. “We were very siloed into different entities,” she says. “I’ve got a cemetery on both sides of the Schuylkill River, I’ve got a funeral home, and a pet cemetery. Legally, we’re different organizations, but my first order of business was unification. We need to act like one organization.”

Despite Goldenberg’s efforts to raise the Laurel Hill cemeteries’ profile in the region, one major misconception persists. Many people believe the cemeteries are full, even though there’s still space in both.

“Anybody can be buried there,” she says, “You just need to buy a lot.” 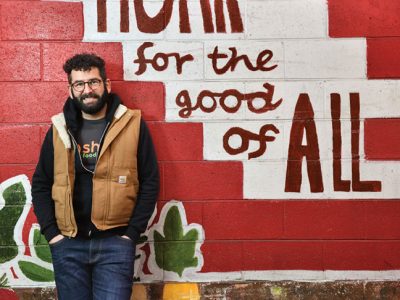 Features
The Hunger to End Hunger