A commanding and enigmatic new figure has taken up residence at the eastern entrance of College Green. Brick House, a 16-foot-tall bronze sculpture by Simone Leigh, was installed near the corner of Walnut and 34th Streets in November. It is a gift from Glenn Fuhrman W’87 WG’88 and Amanda Fuhrman C’95.

Leigh, a Brooklyn-based sculptor who had a solo exhibition at the Guggenheim Museum in New York in 2019 and was recently chosen to represent the United States at the 2022 Venice Biennale, characterizes her artistic process as a “formal creolization” that melds female bodies with elements of the buildings where women labor. This monumental statue draws inspiration from the historical and contemporary African diaspora. The cowrie shells that adorn the braids on its subject symbolize wealth and femininity, and also the African slave trade in which cowrie shells were used as currency. The abstract, skirt-like base was inspired by Batammaliba architecture in Benin and Togo and the teleuk dwellings of the Mousgoum people of Cameroon and Chad—as well as the restaurant Mammy’s Cupboard in Natchez, Mississippi.

“Brick House is not a portrait,” says Leigh. “It brings disparate forms together in a way that collapses time.”

Another casting of Brick House is on temporary exhibit on New York’s High Line through next spring. When the Fuhrmans learned that Leigh, whose work first captured their attention in 2016, hoped that this particular piece might find a home on a college campus, they reached out to their alma mater about a year and a half ago.

“While I was a student at Penn studying art history, I gained a deep appreciation for the power and influence of artistic expression,” said Glenn, who serves on the board of the Institute of Contemporary Art at Penn, where he underwrote free admission with a 2008 gift. “I feel—and Simone agrees—that our urban campus is the perfect location for Brick House, where it can be seen by a large and diverse population.”

“Ms. Leigh’s sculpture brings a striking presence of strength, grace, and beauty—along with an ineffable sense of mystery and resilience—to a central crossroad of Penn’s campus,” said Penn President Amy Gutmann in a statement. 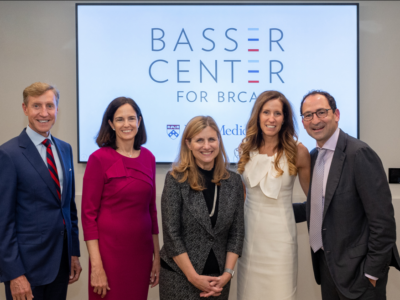 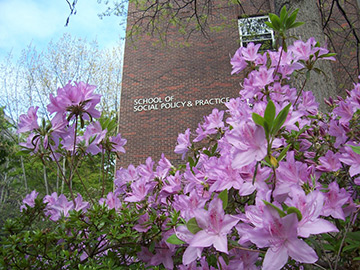 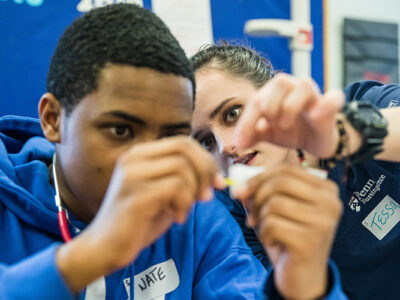