The Laver Cup aims to be a tennis experience like no other. 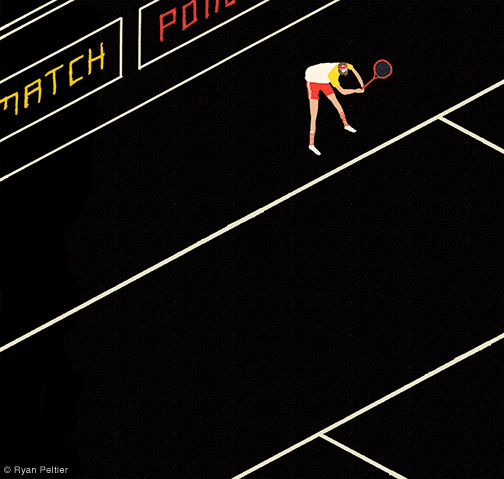 Last September almost 100,000 people packed into Chicago’s United Center to watch tennis players from around the world in the second annual Laver Cup tournament. Launched by Swiss tennis great Roger Federer in 2017, it’s no ordinary competition. Today Show host Savannah Guthrie, who was in the stands, described it as “tennis heaven” on Instagram. At a press conference, John McEnroe called the Laver Cup “the most exciting and innovative thing to happen in tennis.”

Along with the action on the court, that’s in part thanks to the man behind the tournament—Laver Cup managing director Steve Zacks C’83.

As with golf’s Ryder Cup, players compete as teams for the Laver Cup—in this case, it’s Europe against the rest of the world. The atmosphere is mostly light-hearted, but the competition is fierce.

Teammates watched the matches from oversized couches placed on the side of the court. Team World, headlined by South Africa’s Kevin Anderson and the US’s John Isner—ranked No. 8 and No. 10 in men’s singles, respectively, by the Association of Tennis Professionals (ATP)—got the crowd cheering during water breaks by instigating the “wave.” Team Europe, including Federer (No. 3) and Serbian Novak Djokovic (No. 1), was more subdued, patting their teammates on the back for encouragement. “They are younger,” explained the 37-year-old Federer at a press conference.“We are happy to sit and fist bump when required.”

(In one of tennis’ great rivalries, Federer and Djokovic have played against each other 47 times, with the latter leading 25-22. They played doubles together at the tournament, in what proved a case of the whole being considerably less than the sum of its parts. Both were so used to dominating the court, they kept colliding and accidentally hitting each other with tennis balls, and went down to defeat.)

The Laver Cup’s goal, says Zacks, is to give tennis a jolt, making it more appealing. “We wanted this to be an experience unlike any others you get in tennis,” he says.

Crowds at both the inaugural event last year in Prague and this year’s tournament (both won by Europe, by the way) exceeded expectations. Global sponsors include Mercedes-Benz, JPMorgan Chase, and Moet & Chandon. Besides Today’s Guthrie, celebrities like Bill Gates and Anna Wintour have been in attendance.

Most telling, perhaps, is that even though the tournament is not an official ATP event and doesn’t affect rankings, the world’s greatest players want to take part. Rafael Nadal (No. 2) played last year, and Juan del Potro (No. 4) was signed up to participate in Chicago before cancelling at the last minute because of an injury. One reason: it’s a welcome break from the tedium of the regular tour. “It’s just so fun,” says Isner.

Other players see it as a way to enhance their brand. “A lot of players and agents watched the first tournament on television, and they realized the camaraderie, the fun—it’s a way to showcase themselves to fans in an entirely different way,” says Zacks. “The measuring stick for any kind of event is, do people want to do it again? … they all said they want to come back.”

An economics major and psychology minor at Penn, Zacks already knew he was “interested in consumer behavior,” and found his calling when he stumbled across a marketing class. “I can’t remember what it was called,” he says. “But I was shocked that this was actually a job. I hadn’t thought about it like that. It was a combination of left brain and right brain, so I took as many classes as I could.”

During his senior year he interned with the Philadelphia Flyers’ communications and press department, and then headed to Columbia’s business school. Stints at PepsiCo, Bristol Myers, and American Express followed. In 2000, a former intern alerted him that a private jet company then named Executive Jets, owned by Warren Buffett’s company Berkshire Hathaway, was looking for someone to run its marketing team. “I had never been on a private jet,” says Zacks. “But I was intrigued.”

He learned an important lesson early on when his red wine went flying during takeoff. (A private jet “leaves the tarmac very fast,” he says.) Laughing, he confesses that he quickly grabbed some club soda to scrub at the cream colored walls and walnut furniture—which he wouldn’t do now. “When you are ruining the finishes of a multi-million dollar plane, when you spill, it is better to say, ‘I’m a knucklehead,’ and take ownership,” he says.

Under his leadership, the company changed its name to NetJets and started marketing to wealthy individuals as a subscription service. (An entry level membership costs $145,000-$165,000 for 25 hours of flying, which does not include taxes, passenger fees, fuel, or facility charges.) Celebrities signed up—including Roger Federer, who Zacks got to know when the tennis star became an official company brand ambassador.

When that led to an offer to run Federer’s new tournament, Zacks immediately said yes. He’d always loved tennis and remembers watching Rod Laver, the legend for whom the tournament is named, play as a kid. His dad even let him ditch his high school classes at the Fieldstone School outside Manhattan to attend the US Open.

Some tennis experts dismiss the Laver Cup as a gimmick. Isner for one takes issue with that view. The competition, he insisted at a press conference, is “100 percent serious.”

Another criticism is that the Laver Cup is an event for the rich. While tickets to the Chicago event technically started at $26, most cost in the three- or four-figure range. VIP guests passed the weekend in a pair of lounges where Moet champagne flowed endlessly and Chicago’s top chefs provided the food.

Media coverage has also been spotty. Though Amazon streamed the tournament, it didn’t get airtime on ESPN or daily coverage in the New York Times, for example. “The Laver Cup occurs dead in the middle of the college and [NFL] football season, so there is no question we have competition for fan interest,” Zacks concedes.

But while it’s still early days for the tournament, Zacks insists it already possesses the most important ingredients for success: “The players fight for every point to exhaustion, and the fans are riveted at the edge of their seats,” he says. “What more is there?”