“Someday, you must bury me under that tree.”

Lightning struck the tall tree sheltering my father’s tomb in the garden of my childhood. The great being went up in flames, lighting up the night like a huge star. The burning tree acted as an otherworldly torch, leading my thoughts to the beyond, where a million other stars exist as golden seeds God spreads nightly to germinate our dreams. I tell myself how it is surely such a torch that in olden days, Knights Templar held to assemble at their Asylum, before marching in the order of procession to the residence of the dead, for the secret burial service of one of their own.

But this tree-torch happened in Haiti, and not Medieval Europe. My father’s grave was dug in the land where Christianity and Vodou coexist. Graham Greene wrote, “There is something peculiarly Roman in the air of Haiti: Roman in its cruelty, in its corruption and in its heroism … The auguries are still told in the entrails of beasts … Haiti is the scene of a classical tragedy.”

Yet my father lived the life of an agnostic, averse to rituals. His attitude was not uncommon in a man raised during the early years of the 20th century, even though he served as altar boy when growing up. His intensely Catholic mother, wanting this favorite child of hers to incur God’s favor, insisted that he bathe early on Sunday mornings, dress in a freshly ironed white shirt and pants prepared for him by the laundress, then be guided across the street by a trusted servant to the church of Saint Louis King of France.

It was a small church built on land the family owned in the Turgeau neighborhood of Port-au-Prince, and eventually donated to the city. That neighborhood remained for a long time the area of choice for wealthy families to live, and where they established their Victorian gingerbread-style homes.

Through the years, Port-au-Prince continued to spread, along either side of the coastline, and up the many hills and mountainside above it. My father’s life, and the places of residence he chose for himself as an adult, reflected this expanding movement of the city. His grave rests in the Bourdon hills of Port-au-Prince, on the way to Petionville, on land he bought when I was a child, because he wanted to escape the bells of the Dominican monastery in the nearby heights of Turgeau.

I was an adolescent growing up in Bourdon, when my father one day stopped briefly during the stroll we took in the garden, near the river. He placed one hand solemnly on my shoulder, pointed to a tropical apricot tree with the other, and said, “Someday, you must bury me under that tree.”

The tree to which my father pointed, knowing it all of his life as an apricot tree, had actually nothing in common with the apricot tree of warm temperate regions, believed to originate from Armenia, and a producer of small orange-colored fruits. The Haitian apricot tree is a Mammea Americana, or South American apricot, an evergreen confined to tropical or subtropical climates. It can grow up to 60 feet, and bears fruits up to eight inches in diameter.

What once was my father’s splendid apricot tree became a charred corpse. What was the ground-area under the midday sun for the tree’s large, soft, mottled shade became the stage for stark projections of a multitude of sword-like extremities, roughly indented limbs, and giant black arrowheads.

Yet, how well I remember this tree’s emerald elliptical leaves! Their copper-colored inner side; leaves large and strong like a man’s open palm. How often I tasted its fruits—big as breadfruits, but covered with a coarse brown skin, and flesh that was a warm orange color, firm and moist—eaten fresh off the tree, or in sweet jams that had the feel of velvet on my tongue.

Everyone in the riverside slums, which keep expanding opposite our property, now fears the tree. This foreboding in slum dwellers’ hearts is the same regarding people who have died—Haitians fear the dead, for they believe the dead have power. And death by lightning surely sets you apart. The tree is now a mighty guardian. It acts as a far more effective protection, albeit too late, from grave robbers looking for a fresh cadaver, than did the thick layer of concrete I paid masons to pour around my father’s coffin after the funeral.

Grave robbers are driven by schemes of sorcery, undertakings usually planned and supervised by an oungan—a Vodou priest—or by a sorcerer. One possible motive in digging up a grave (and this would not have been the case for my father who died in a car crash) is to retrieve the body in time to complete the process of zombification, originally started by poisoning. The poison is alleged to be a powder mixture that relies heavily on extracts from the puffer fish; symptoms of this poison mimic death—its effects last long enough for a wake, funeral, burial, and eventual recovery of the purported corpse, deep in the night, under stars and candlelight, with incantations and counter poison.

Another reason to steal a body is to access, steal, and imprison the soul, which in Haiti bears the lovely name of Good Angel. The soul is considered energy that can be stored indefinitely, adding to the temple’s existing spiritual corpus, and manipulated for various magical enterprises. Every slum area in Haiti, depending on its size, counts one or more active Vodou priests and temples. It was fair of me at the time to assume that any such priest living in the slums opposite our Bourdon hills property, then twice the total surface of the slums, would view my father as a powerful man of the world endowed with a soul that would be an enviable asset to his temple or sorcerer’s status. It should be said that in countries where education for the masses is lacking, upward mobility practically nonexistent, and where people live with an all-pervasive sense of powerlessness, sorcery and its promise of spiritual leverage might hold an irresistible appeal. Understanding this kind of reality, the layer of concrete I had masons pour over and around my father’s coffin before closing the grave may be seen as a form of life insurance I bought for his soul.

Marilène Phipps GFA’89 is the author of Unseen Worlds: Adventures at the Crossroads of Vodou Spirits and Latter-day Saints , from which this essay is excerpted with permission of Calumet Editions. 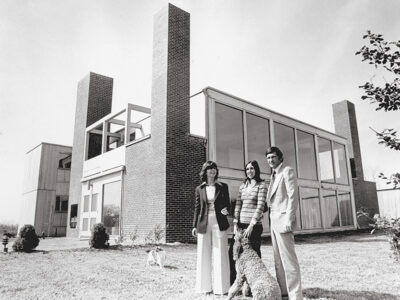