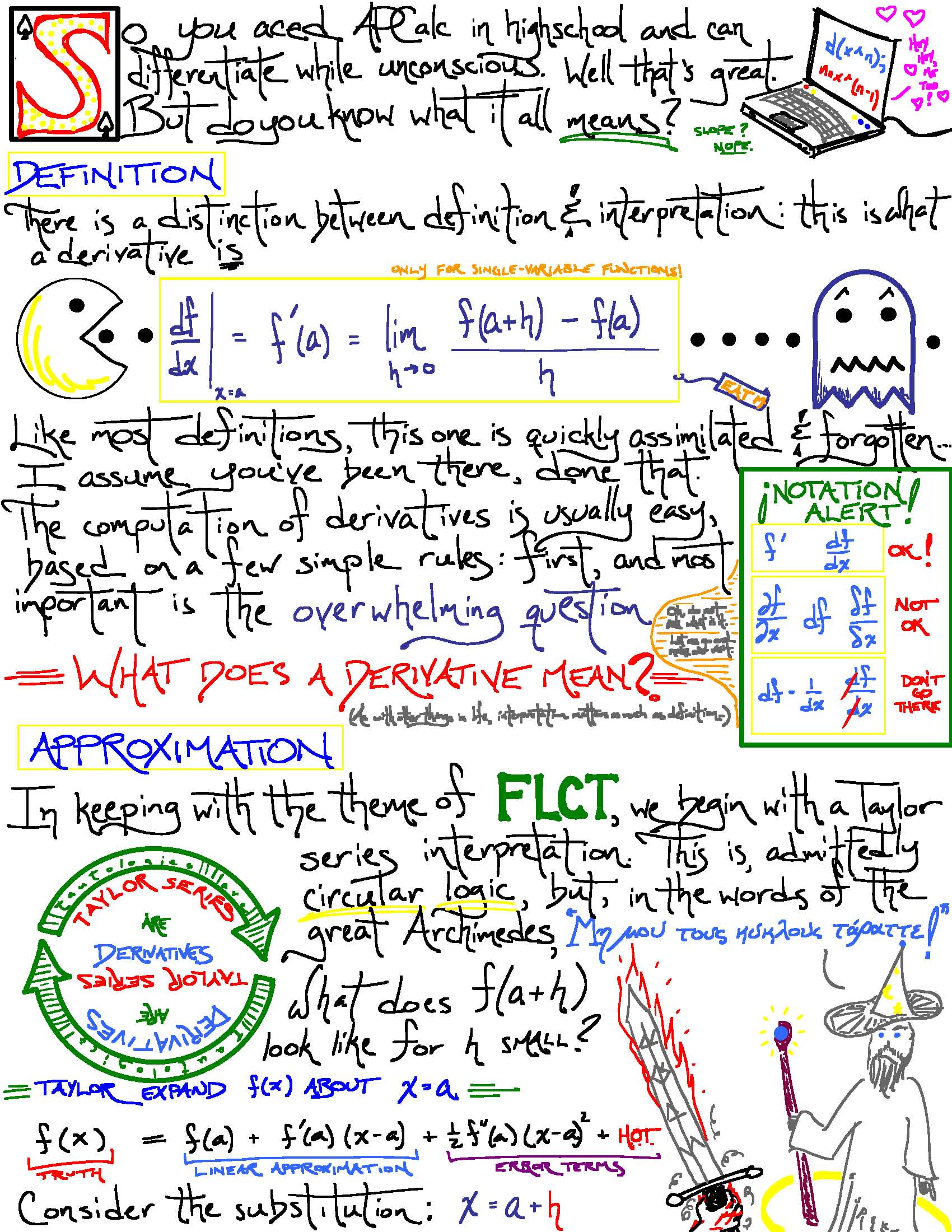 Courtesy of Robert Ghrist. From the chapter 2: differentiation.

Penn mathematics professor Robert Ghrist has a crazy idea: get students to actually read their calculus textbooks. And he just might succeed.

Ghrist is the creator of Funny Little Calculus Text, a hand-drawn online guide to calculus that keeps things – well, short and funny. Each chapter is chock-full of drawings, doodles and references to everything from Pacman to Santa to Virgil to Shakespeare.

Ghrist is known for his innovative teaching methodology. The Gazette wrote about him back in 2008, when he came to the University as the seventh Penn Integrates Knowledge, or PIK, professor.  “Not only is he one of the preeminent applied mathematicians of our time, but he is also known … as a star teacher of calculus,” President Gutmann said then. “And he loves to teach calculus. Calculus is not an easy subject to turn students on to, and Ghrist has shown over and over again that he can do that. Students love his calculus course.”

In fact, FLCT began as a way to help his freshman calculus students better understand the concepts behind the math.

“All of my students are smart,” Ghrist says. “They’ve all had calculus in high school.”

The problem? “They’re good at computing. What they need is depth in understanding.”

“Calculus is actually a beautiful story,” he says, “It’s got an arc – it’s got definite plot and development. A good calculus book should tell calculus as a story.”

He drew up the first chapters of FLCT on his tablet PC and posted them online for his students to review. The book is hand written, “So that it won’t look anything like a normal calculus text,” Ghrist explains.

His master plan worked. “It seemed as if they actually read the notes, which was remarkable.”

But soon students, teachers and autodidacts from everywhere began noticing Ghrist’s work. FLCT gained prominence on the social news website Reddit, and Ghrist began getting a steady steam on emails from fans.

“Maybe I’ve found something that works for people,” Ghrist says.

Because if there’s one person who can convince you that math is fun – it’s Ghrist.

“I would go so far as say romantic,” Ghrist says. “Mathematics is exploring an unseen world.”

“We don’t really give the impression of being like Indiana Jones,” he trails off. “Maybe I shouldn’t complete that sentence,” Ghrist smiles.