20 years of Plays by Women at New Georges 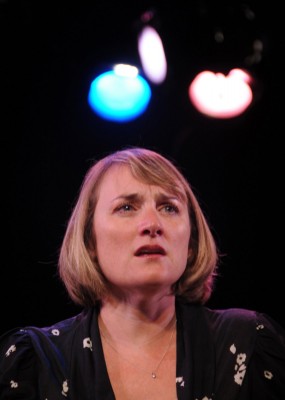 Susan Bernfield C’86 has been busy since her days as a Penn Player. She’s gone to drama school, acted professionally, written several plays, and in 1992, she founded New Georges—a nonprofit theater company based in New York City and named in honor of George Eliot and George Sand. She’s served as artistic director there for the last 19 years, leading the company in its mission to produce exciting new plays by women. On the cusp of her company’s 20th year, Bernfield made time for a conversation about New Georges.

What led you to start New Georges?
It wasn’t ever really my intention to have a theater company. In 1991, there was this mini-resurgence of feminism happening, and I ended up in an acting class where the women were complaining about how there weren’t any parts for them. We decided to start a theater company; we thought there’d be better parts for us if we produced plays by people who were like us. Some of those original partners fell away over the years, but I just kept going.

What’s been the most challenging part of keeping New Georges running for the last 19 years?
At the beginning, there were a lot of things we forgot to anticipate: I found myself saying things like, “We didn’t find someone to strike the set, so I guess I’ll be striking the set.” “I will carry this tire across the street and almost be hit by cars.” You just do everything that needs to be done. It’s really an insane endeavor, especially at the level we were—and in some ways still are—working at. Staying scrappy and small is a huge mandate for us, even now.

The money thing is always difficult, too, and I think it just gets more difficult as you need and have more money. The hardest thing for me is asking people for money, time or other things, which is a huge part of the job. That’s still really difficult for me.

How do you choose the works you produce?
It’s a pretty unscientific process. We are always keeping an eye on what a lot of different people are doing. Often, we develop the piece or we already have relationships with people and we want those relationships to come to fruition in production. We consciously work project to project and not seasonally. Generally, we do two [productions] a year, but they’re discrete projects that may have started at different times. For example, there’s a play we’re producing [next month] that we’ve been working on for two years.

And the works all have to be brand-new?
Yes; usually, it’s [the writer’s] biggest production to date, and for about half, it’s their first production ever. It’s interesting, because when I was growing up and performing at Penn, plays were something you were in. I don’t think we thought much outside the box in terms of interpreting them. The play was something that existed, and that’s what I thought theater was. [With New Georges], I became interested in the idea of starting from the beginning of the process and making a play the best piece of theater it can be. Since we work with early-career artists, there are always textual changes all along the way. During rehearsals, the playwright and director are both in the room, working to come up with this cumulative theatrical vision. That process is what interests me.

What, to you, makes a strong play?
I want to be surprised and see something I’ve never seen before. That can happen through the characters or the method of storytelling. I want to feel like there’s an expansive notion of the world. I’m very interested in things that are magical and surprise me in different ways. I want to see a very different perspective of the world.

Do you think New Georges could have done as well as it has if it were based outside of New York City?
I think so, but we probably wouldn’t have had the same level of support. I do think the status of theater outside New York is really healthy right now, though. The center of gravity seems to be changing very rapidly, especially for new plays. 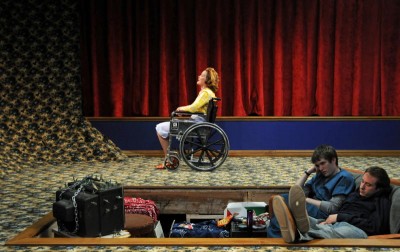 A scene from Bernfield’s play, Stretch (a fantasia), produced by New Georges in 2008. (Photo by Jim Baldassare.)

Tell me about your own play-writing career.
I started out writing solo pieces, as a lot of actors do. I wrote my first play in 1994 or 95, and New Georges produced it in 1996. I’ve written six or seven plays over the years [including Stretch (a fantasia), Big Hungry World, Barking Girl, Out From Under It, Tracy Petunia, and a solo musical, Tiny Feats of Cowardice] and right now I’m trying to reboot a little and write something new.

How has running a theater company affected the way you write?
A lot of what I do at New Georges involves guiding plays and playwrights along. Structure is something I understand well—I know what’s going to come next [in a play] intuitively, not intellectually—and I’ve become more interested in the design moment that’s about to happen rather than what the people on stage are about to say. I’ve become much more visual, so being a producer has really changed my writing that way. I had never pictured myself as someone who would become a visual writer, but now I see the way [scenes] will look almost as much as I hear them.

What’s next for you and for New Georges?
We’re getting ready to kick off our 20th anniversary season next month with a play called Nightlands [on view Oct. 5-29]. It’s a really cool, really theatrical play set in Philadelphia. It’s about a Jewish housewife who wants to become an astrologer, and who studies with an African-American woman in the 1960s.

As for me, I’ve been writing songs and teaching myself the ukulele.

Interested in learning more about New Georges? The company maintains a YouTube channel with promotional videos for its productions and fundraising efforts. Below, Susan talks about what makes her company unique and reveals a favorite New Georges tradition: saving one souvenir item from each production: