What’s that Playing…in the Library?

Imagine you’re sitting in the library, struggling through a reading assignment or term paper. It’s 7 o’clock at night. You’re hungry, tired. Then suddenly, live chamber music floats over the rows and rows of books.

It’s not a far-fetched scenario if you’re a Penn student these days. In November, the Penn Libraries premiered a new concert series, Music in the Stacks, which sends student music groups into libraries at Penn to perform among the books and study carrels.

“Libraries are increasingly seen as creative spaces,” says Liza Vick—who, as head of Penn’s music library, came up with the idea for the new series. She says hearing students warm up in the stacks and then perform inside library spaces “creates an air of excitement in the library—and the library isn’t always a space you think of as enlivened in that particular way.”

In a collaboration with the Penn Music Department, the kick-off concert on Nov. 29 posted performers from the Penn Chamber program outside the Ormandy Music and Media Library reading room. Violin and cello bows in hand, they played work mostly by Brahms and Bartók. 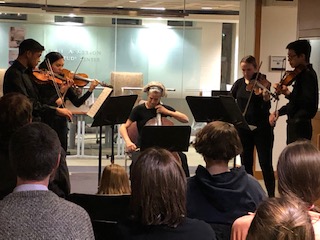 Vick advertised the concert with flyers in the libraries and around campus, but certainly not everyone on the fourth floor of Van Pelt that day knew it was coming. “There were definitely students in the room who weren’t aware that a performance was happening, but they seemed happy to participate,” Vick says. “Some of them came and listened. Some of them simply kept studying and listened.”

For the next concert, held just two weeks ago on Valentine’s Day, the performance moved to the Lee Lounge—just inside the main entrance to Van Pelt—and featured the Penn Chamber Choir and Collegium Musicum. Both groups sang love songs: Medieval, Renaissance, and early Baroque selections for Collegium Musicum; jazz and pop arrangements for the Chamber Choir. 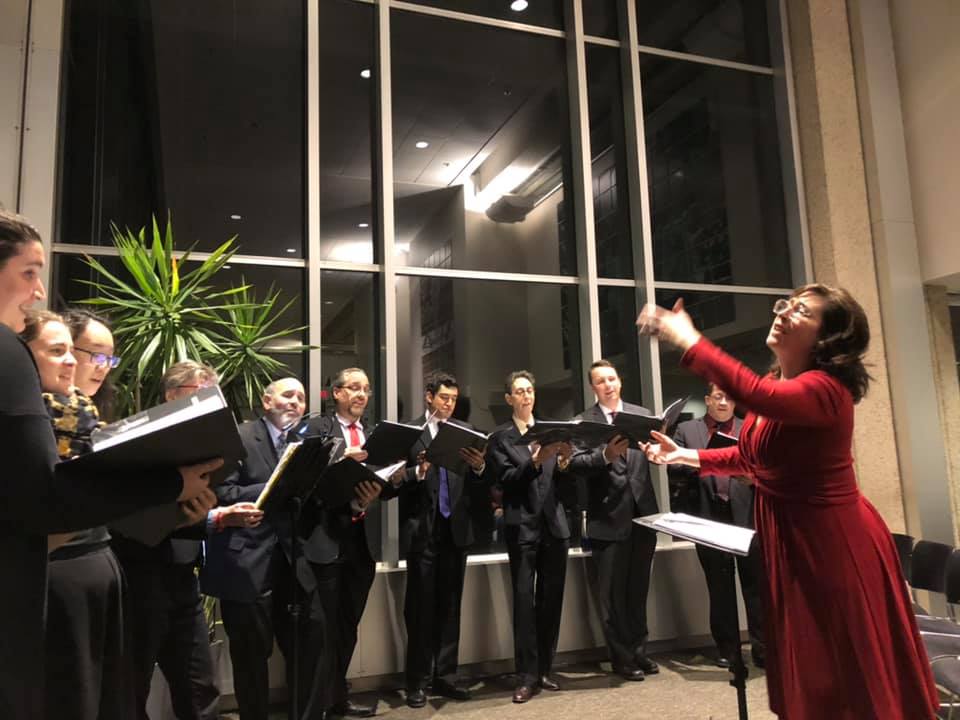 Vick watched as students walked into the building or drifted down the hall from their study spots and came over to listen for a few minutes before returning to their books and laptops. It was exactly what she’d imagined the concerts would offer—along with a gentle reminder about the library itself. “I’m hoping [these performances] prompt students to engage with our music library,” Vick says. “Hopefully when they come to the library and hear music, it reminds them that we have collections that they can come back and use.”

While the Penn Libraries’ other concert series, Music in the Pavilion, features professional musicians in an unchanging location (the sixth-floor Orrey Pavilion in Van Pelt), Vick envisions Music in the Stacks moving from place to place and featuring a varying lineup of student performance groups.

“I’m hoping we can involve more and more students, both within and outside the Music Department, playing a variety of instruments and a variety of musical styles and genres,” she says, imagining a world music performance set in the Penn Museum Library or another seasonally thematic concert similar to the Valentine’s Day one.

She says the goal is “a handful” of Music in the Stacks concerts every semester. “Working with students, it’s advantageous to have more flexibility and agility,” Vick adds, “so I’m trying not to put a lot of limits on this.” The one limit she’s sticking to? No concerts during Reading Days and exam periods.

There are four performances left between now and the end of the academic year—including a special edition for alumni weekend on May 18, 2019. Here are the details, for anyone who wants to check out a side of Brahms with their books: