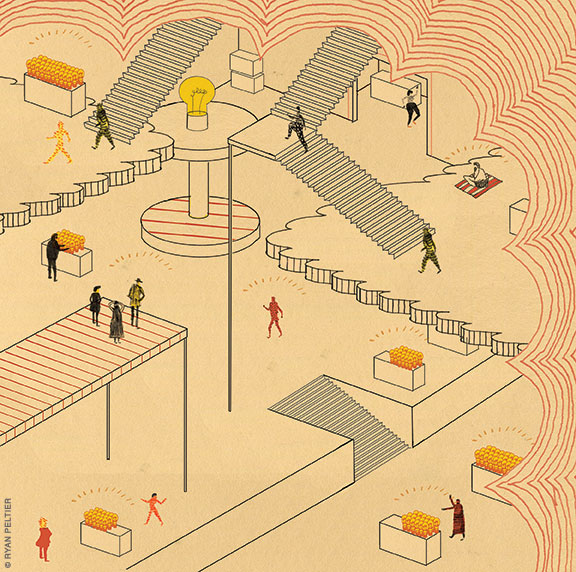 Through a four-foot door into the baroque bewilderment of Old Dhaka.

By Stephen Kieran | People on the street are always coming at you. Sometimes they seek a few taka, sometimes they sense a sale, but more often they are just curious. Where are you from? Why have you come to this city where so few outsiders ever come? Everything you ever thought might exist, or might have once existed, is for sale here, today. If you want a cow slaughtered it can be done right here, on the street, with the blood running off into the gutter. If you want a bucket of springs, the bedspring type that you have not seen in decades, they are at your feet in the streets of Old Dhaka. This is the city without a façade, or so it seems. The architecture is overwhelmed by the people and the stuff. We in the West live behind our façades. Our cities depend upon façades to manage relationships between us. But here, goods and hawkers spill out from open-fronted stalls with little sense of boundary. Who cares? In this densest of all dense places, there is no my space, your space, or our space. It is all just space, here to be occupied, people and stuff moving into the street, then out, then spreading up or down. There must be some indecipherable code of management, or is there? Can Dhakans manage without managing? Is something else at work here?

Within the ebb and flow of these streets and alleys came an urgent invitation from a stranger: “Come see my temple.” Our companion and guide on this ever-shifting passage was Salauddin Ahmed GAr’97, a Dhakan architect and friend. He swiftly evaluated the offer and the offerer. In we went, all bent over, awkwardly scrambling through a four-foot door, a rabbit hole, a looking glass into the wonderland of Old Dhaka beyond the street, as if the streets themselves were not wonder enough. Traversing a dark passage into an unexpected shaft of light from above, we found an exquisite 18th-century Hindu temple. Move over Bramante. It was occupied by a bare-chested priest in a white loincloth in the midst of prayer. The small, insistent man who led us into this secret world grabbed the metal gates separating us all from the temple, rattling them and shouting at the priest. Unmoved, the priest continued to pray. But the man kept rattling and shouting. “What is he saying?” I asked Salauddin. The answer: “Open Now! Pray Later!” And soon enough, the priest gave up the ghost of prayer and opened the gates.

The plan, section, and elevations of the temple could have come straight out of Renaissance Florence or Rome, with its cubic form and its black and white checkered marble floor. The proportions reflected Western classicism. Light filtered in from a lantern above. The central shrine stood beneath a Baroque-like baldacchino. Move over Bernini. Only the tiled walls, completely covered with glazed plants and creatures, along with the offerings at the shrine, betrayed the presence of different gods. Where did this temple come from? Was it an earlier Christian chapel from the colonial era, later occupied and reborn as a Hindu temple? Dhaka, after all, is a place where much of the material world seems to go for renewed life. Was this temple yet another example of the Dhakan brilliance at giving new life and renewal to all that once was, recycling the spiritual as well as the material world? Who knows? How would one even find out?

Before we could stop long enough in the Hindu temple to grasp the shock of its existence in that time and place, another entreaty arrived: “Come see my lightbulb factory.” The lightbulb factory was actually within the Hindu temple. Talk about mixed uses. Imagine a sweatshop in your church or synagogue. Micro-manufacturing is in every seam of Dhaka life. We build big-box factories with hundreds and thousands of employees in anesthetized “parks.” Dhakans are hermit crabs. They find an empty shell and move in with as many workers as they can fit. If you need more space, find another fragment of a shell. If you need less space, just chuck the shell and move on.

Down a dark corridor that shared a side wall with the chapel, we moved into a different sort of light. This time, the room at the end of the tunnel offered not a shaft of divine light from above, but only the glow of tungsten bulbs, with little outside light whatsoever. That light reflected feebly in the complete darkness, barely illuminating the faces of several middle-aged women in colorful saris as they hand-assembled bulb after bulb. They continued their work, barely reacting to our presence. We were no surprise to them. Likely paid for each stem, they worked on in the cool of the stone walls beside the temple. As they sat on wooden stools and toiled at aqua-green work tables, tungsten wires were twisted, soldered to a glass socket, then stored upright in a wood box, each socket in its own hole. In another long, narrow room, three men and a child were busily shaping glass into bulbs and stems, one by one. Unlike the women, they stopped their work, looked up, and smiled broadly. Maybe they were not paid by the piece. Gas tanks lined one side of the room with no ventilation and an open kiln. Reaching down to a basket filled with hundreds of small glass globes with short necks, the women inserted the wires into a globe and then attached the globe to the socket, again and again and again. Completed bulbs were racked individually in wooden trays.

Stephen Kieran GAr’76 is a founding partner of KieranTimberlake and co-author of Alluvium, from which this essay is excerpted, with permission.