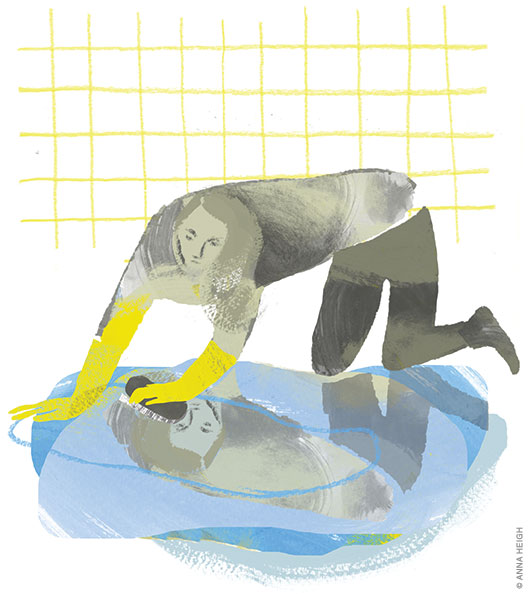 By Sara Schuster | Though we have coexisted for the last three years, Foam and me, I have no claim to this place in Philadelphia I consider home. “Foam,” the house’s nickname, stemmed from an intoxicated play on the last digit in the address—“four” to “foh” to “foam”— and I like to imagine a group of the boys giggling out each line, exhaling the numbers and watching them float in their smoke. This christening happened “sometime in the ’80s,” I’ve been told, and was then passed down through decades of fraternity brothers, and somehow also to me.

I spent a year at Foam before having space of my own there. Some nights I slept through parties in the warmth of a then-boyfriend’s space heater while the house tremored from the music and the weight. Other nights, we’d lie in bed and occasionally hear the quiet but unmistakably violent zaaap sound of the electric rodent trap stunning another mouse. This was all unfamiliar—and intriguing—to a girl who’d grown up in an apartment, and I regarded the whole house with fascination.

Like many of West Philadelphia’s Victorian rowhouses, Foam has withstood years of makeshift solutions—duct-taped windows, plumbing clogs resolved with an irresponsible amount of Drano, assorted and broken rat traps, tricky wiring. Hundreds of beer kegs have been dragged across its mahogany floors, which bear only faint scuff marks for scars. When a majority of the houses around it were converted to gas heat, Foam remained at the mercy of a capricious oil tank that provided warmth when it saw fit, and other times refused point-blank. Finally someone realized that this might pose some danger, given the house’s constant haze, and the oil tank was replaced. Yet even a year later, the slick, tar-like smell lingered.

Imagine remarkably high ceilings ornamented with richly carved moldings, mirroring the lacelike wooden trim on the exterior brick; the crowns above the bay windows and the shingles stacked like soldiers on the roof; mirrors encased in engraved, flowery frames; wooden balustrades lined with sculpted columns; 10 sprawling bedrooms—this was the house in its glory days.

Now add decades of rain and let the paint colors slowly all meld to the same black-brown hue. Add burned-out, never-replaced light bulbs in the yellowing glass sconces, leaving the first floor subject to the whims of the changing daylight hours. The remains of the careful architectural details feel like well-kept secrets, visible only in the early mornings when the sun hits the windows just so. As the wood decays inside and out from winter dampness, and as dust collects in the delicate rivulets of the moldings to fill and obscure their definition, what is left is Foam: a reminder of a grandeur that was, but a place now of shelter, not beauty.

As I came to know the house, I’d pause by the front door to inspect the missing chunks of the imposing master staircase, fancying myself one of the elite few who recognized the house’s duality—far gone from the original majesty it hinted at, but a haven for the boys who had taken over. Both joking and reverent, they would proclaim: “Someone’s foot cracked through the floor last night,” and “The first floor bathroom ceiling caved in,” and “Does anyone else hear that beeping sound? It’s been keeping me up all week.” Look at this magnificent thing we’ve all but ruined. But also, Look at this magnificent thing that somehow hasn’t given up on us yet. All followed by a series of shrugs, and usually more weed.

I moved into Foam alone after sophomore year, in the midst of Philadelphia’s early June humidity. At the tail-end of my three-year climb out of anorexia, and still sloughing off the remains of my romance with the then-boyfriend, I didn’t care to hunt for summer housing. I emptied my bank account and paid the boy’s mother for his room, keeping his coffeemaker and returning everything else. From a box filled with clothing that felt far too small, I filled the spacious closet and seated myself six inches from the air conditioner to catch some of its halfhearted relief.

In the room’s stained mirrors, I’d catch the reflection of an outline I didn’t recognize, and quickly avert my attention. Save for one other subletter I never actually saw, I had the house mostly to myself. But without the comfort of commiseration that Foam fosters while filled during the school year, the pervasive grime grew frustrating to me. So I embarked on what I believed to be a labor of love: I tugged rubber gloves onto my hands and strapped them around my knees, then crawled into the bathtub and scrubbed the tiles bare, performing small feats of acrobatics to make sure no part of me made contact. I fruitlessly ran a vacuum over my room for an hour until I realized the disintegrating carpet was itself creating the mess. Turning to the exterior, I cleared the backyard debris (beer bottles, half-mashed plastic headphones, a surprising number of partner-less shoes, a teddy bear) and spent my afternoons sitting on the metal fire escape, picking off its peeling black paint. But my home improvement projects had no staying power; after the sun set, I’d go back inside only to vacuum the trail of decaying carpet that my sneakers tracked behind me.

With one final push, I edged my way into the basement and battled the fuse box to light the first floor. It was only by shocking myself into submission that the point became clear: Foam had no interest in what I thought it should be. Within weeks the mustard-yellow bathroom tiles turned dark again, and when I was offered another room in a house down the block, I resigned. Leaving the clothing that could no longer contain even a month of my renewed dedication to eating, I gathered a few hangers and left.

But I never returned the key to Foam’s backyard gate, and that lock was the only one that hadn’t been changed by the rental agency when the house filled again in the fall. Missing how the bars of the fire escape dug into my legs while I dangled my feet off its edge, and hoping to catch friends moving in, I found myself back again. Sponge- and vacuum-less, I now entered without agenda. In return, the ever-damp hardwood stairs welcomed me as they creaked underneath my feet. The smell, the haze, the dirt—none of it now incited my urge to drop everything and clean. I can only understand my newfound acceptance as auspicious timing: I stopped trying to fix Foam around the same time I stopped trying to fix me.

When I leave Philadelphia after graduation, I don’t know if I’ll remember the various leases I signed, or the way the one house smelled after Jenny tried to cook a squid, or the fluorescent halo of the bathroom lights when my freshman roommate got up to run before dawn. But I will remember that Foam is where I ate ice cream again for the first time in years, and it dripped on my face leaving me sticky and free. That it was one of Foam’s many dilapidated couches on which I awoke after writing all night. And it was from Foam’s roof that I watched the campus fill up as the summer came to a close, not yet ready to see anyone but ready to feel less alone. The little list of our moments together is what I know Foam by, and the distinctive quality of the house to me is as simple as its continued existence. For those who have roughed it, it is covered in dings familiar only to them, like the pencil marks we used to draw on the walls of my childhood closet to measure my growth.

Sara Schuster is a College junior.