The Tools of Man 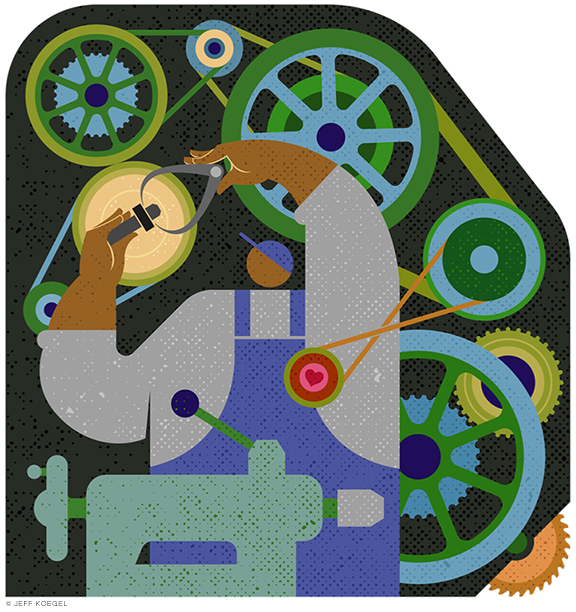 One measure of a working life is the accumulation of obsolete objects that remain with us out of sentiment. A teacher’s bookshelf may hold outdated texts; a physician might hang on to an old analog blood pressure cuff; and an attorney’s library could feature any number of references that are more easily found on the internet.

After my own career in manufacturing and the machine tool industry, I have a soft spot for a number of tools, a wooden chest, and one particular book.

After graduating from Wharton in 1977, I went to work for Cincinnati Milacron, then the world’s largest manufacturer of metalcutting machine tools. The industry was in the throes of heavy competition from the Japanese and other offshore manufacturers, and metal components were swiftly being replaced by newer materials.

My fascination with mechanical things began when I was about 7 or 8 years old. On Sunday afternoons, my family would often visit my great aunt whose deceased husband, Louis McMurrer, had been a master machinist. While my father and uncle watched baseball, I would pore through Louis’s collection of books, which dated to the turn of the century and dealt with machine shop practice, railroads, and steam engines. I quickly realized that if I had access to these machines and knew how to operate them, there would be no waiting for Christmas or birthdays. As a boy whose favorite toys were Lionel trains, I might even achieve my grand dream of building and owning an operating steam locomotive.

The books on machine shop practice were illustrated with beautiful steel engravings and detailed operational instructions for virtually all the metal-cutting machines then in use. An austere beauty adheres even to the humble “automatic screw machine,” whose emergence in the 1870s enabled fast and repetitive machining of a variety of screw sizes and types.

Upon entering manufacturing, I quickly became acquainted with an essential volume that was then the bible of the industry:Machinery’s Handbook. First published by the long-defunct Machinery Magazine in 1914, this exhaustive compendium of tables, charts, and data pertaining to the characteristics of materials and metal-cutting processes was one of those books to which information was subsequently added but never subtracted. In manufacturing, it was in the possession of everyone from machine operators to corporate presidents. You could date how long people had been in the industry by noting which edition happened to be on their desk or workbench. My own copy is the revised 21st edition: 2,482 pages of both common and arcane information.

The book notwithstanding, the real treasures of manufacturing were the measuring tools. These were jewels of the trade: property of the individual operator, machinist, or tool and die maker, and as such, objects of personal pride. To protect them from a sometimes hostile shop environment, they were kept in wooden chests lined with felt. Some of the more delicate instruments, including larger vernier micrometers and block gauges, had their own leather cases. The chests, many of which were made by H. Gerstner & Sons (still going, in its fourth generation), were usually constructed of oak and featured shallow drawers and a removable front panel that could be inserted in front of the drawers. The upper compartment held some of the less delicate and more frequently used tools, including rules, center finders, calipers, squares, and the indispensable one-inch micrometer. Chest owners typically also attached family photographs. These wooden cases were intimately personal. Upon retirement, certain tools might be sold to co-workers, but the chest often became a family heirloom.

The one I possess was handmade around the turn of the century and includes unusual receded brass drawer pulls. It was obviously a matter of pride to a machinist (probably Swedish) who worked many years ago in Rockford, Illinois.

The measuring tools were a matte silver or gray finish with finely incised gradations and numbers. In some shops or factories, tools were regularly taken to the metrology department to be checked and, if needed, reset. Some pieces such as gauge blocks (finely machined squares or cylinders of different dimensions that could be combined to define a measuring point) were polished to a mirror finish. The finish was so fine that they tended to adhere to each other and had to be detached with a small twisting motion.

After every use, the tools were wiped with a clean cloth and returned to their assigned position in the tool chest. Over the years, machinists and others tended to accumulate such large collections that the tool box might require a sling and crane to move it.

This affinity for tools could extend to an individual’s machine, especially if he worked at the same station for many years. I saw an especially vivid example of this in my first job in manufacturing. Shortly before the plant was to close for the Thanksgiving holiday, a co-worker called me down to the main floor. Standing at a respectful distance, he invited me to watch one of the older machinists. The man ran a horizontal milling machine, for which he had had special handles made for the controls. After the closing bell rung—a time when most of his co-workers rushed to wash up and get home—he removed a stack of shop rags—red-orange cloths about one-foot square—from a shelf and began to cover the working surfaces of his machine. I noticed a number of others watching as he proceeded to literally wrap the entire machine to protect it over the long weekend. Although his actions were extreme, no one laughed. It was clearly a sign of respect, if not affection.

Over the years I have witnessed vast changes that have affected manufacturing. The rules, T-squares, drawing boards, and compasses formerly used by designers have been replaced by CAD-CAM (computer assisted design-computer assisted manufacturing) systems. Operators in caps and aprons taking careful measurements after each operation have been largely replaced by individuals in lab coats observing data on the screens of immensely sophisticated electronic controls.

Traditional production processes are currently being challenged by 3D printing, the development of composite materials, and nanotechnology. These advances have greatly increased our productivity and facilitated the rebirth of American manufacturing. But not without consequences.

Manufacturing was once the province of young people whose interest and talent for manual mechanical arts was fostered in high school metal shop classes and apprenticeship programs, and encouraged by families that held such skills in high esteem. This respect was in part generational. The Baby Boomers were born to a generation whose bitter experiences of the Depression had imbued them with an abhorrence of wastefulness. Long before recycling became fashionable, they repaired everything they could, and found uses for what many people today would consider trash. Old mayonnaise jars became repositories of nails and screws of every description. Jelly jars became juice glasses. Children imbibed this ethos. Old tires became swings. Inner tubes provided the rubber bands for slingshots. Baby carriage wheels were prized for their use on homemade wagons or racers. When a radio failed to operate, a dark or dim vacuum tube was removed, taken to the drug store, tested, and when necessary a replacement purchased. In such families, the choice of a career in “industrial arts” was cause for pride.

As times and technology have changed, one of manufacturing’s greatest challenges involves attracting men and women who have both computer skills and the requisite interest for the manufacture of parts. The latter is a hard thing to inculcate in a generation that has known neither the tools that first seduced me nor the thrift that ensured objects were built to endure.

The metal rotary-dial telephones of my childhood (designed by renowned industrial designer Raymond Loewy for Western Electric) were created to last for decades. They could not be purchased but were in effect “leased” by the local service supplier. Today’s smartphones are designed to be discarded after a year, maybe two. So it goes with so many other accoutrements of contemporary American life. The knowledge that a new phone, dining room chair, or anything else will require replacement in relatively short order precludes the development of a meaningful relationship with it—and thereby hollows out a critical source of pride that workers once took from producing such things. That pride has been traded for empty abundance. The high-minded among us may insist that a “mere object” is unworthy of reverence, but that only works to clutter our lives with a never-ending parade of disposable trifles—scarcely any of which would inspire a dedicated worker to swaddle his machine in clean cotton.

Despite such changes, or perhaps because of them, people from all walks of life continue to pursue activities that involve personal expression through hands-on achievement and the gratification of being able to see and touch fruits of their work. Gardening, woodworking, cooking, and any number of crafts are some of the activities with which literally millions choose to spend their happiest times. The steady erosion of such opportunities in the world of work is a thing to regret. There is something about the handmade or personally crafted that inspires both awe and respect.

In viewing old pictures and films of manufacturing facilities, it may be difficult to define the men with dirty hands and soiled aprons, and for that matter Rosie the Riveter, as artists. But at least some of them, in crafting parts out of metal, would have understood what Michelangelo meant when he said, “The statue is already in the marble. I just cut away the excess.”

As we move forward in building a world that will be more attuned to constructive production and, hopefully, a better life for all people, it would be well to remember, and to preserve the accoutrements of, some of the things that brought a unique and private satisfaction to previous generations: pride in individual craftsmanship, the bond between man and machine, and a reverence for well-made objects and the tools that bring them into being.

Frank Burke WG’77 is a marketing and communications consultant.