The Elusive Legacy of MLK 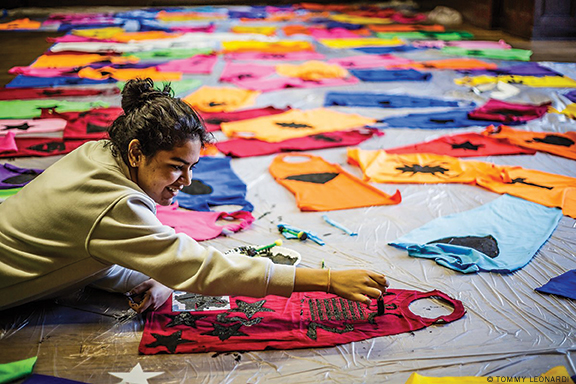 Such was the prevailing tone of this year’s MLK Lecture as guests Charles Blow and Joy Reid, peering through the lens of race and media, offered a frank, and often grim, assessment of their expectations for life in America under President Donald Trump.

In front of a large audience at Annenberg’s Zellerbach Theater a little more than a week after Inauguration Day, Reid, a national correspondent for MSNBC, remarked that even simply planning the content of her weekend political talk show, AM Joy, had become fraught. Her producers struggled to keep up with the daily outbursts of “immediate outrage” that had characterized the administration’s first nine days.

Blow, an op-ed columnist for The New York Times, voiced frustration about the perceived need to write about “outrageous” actions like Trump’s immigration ban. Quoting the novelist Toni Morrison, Blow said, “The function, the very serious function of racism is distraction.” He lamented being too distracted to write about other issues that are important to him, such as the passage of a law in his home state of Louisiana that classifies certain crimes against police officers as hate crimes—a category previously reserved for immutable characteristics like race and gender. The “Blue Lives Matter” law, widely seen as a response to the Black Lives Matter movement, was cited in January by a Louisiana police chief as a rationale for treating resisting arrest as a hate crime.

Both speakers worried about the treatment of Black Lives Matter demonstrators under the Trump administration. “Black people know what white people mean when they say, ‘Law and order,’” Blow mused, to murmurs of agreement from the crowd.

The fate of the Affordable Care Act also came up. Charles asked Blow why race is generally not discussed in debates about the ACA and President Trump’s pledge to repeal it. The columnist replied that although President Obama endured some criticism for not doing enough for African Americans, “in fact almost all of his policies were disproportionately helping black people—it’s just he wasn’t saying anything about it, so that he could get it passed.”

Blow then cited King’s advocacy for redistributing wealth—the central thrust of his “Poor People’s Campaign” and of his final book, 1967’s Where Do We Go From Here: Chaos or Community? How many poor, black people, Blow asked, will “lose their lives” if the ACA is repealed without an adequate replacement? He voiced little optimism that enough Americans would approach that issue in the spirit of King’s culminating crusade, whose emphasis on economic equality remains toxic to many.

“We deal with King as if he’s always about, ‘My young daughter, your young daughter, join hands and sing Hallelujah,’” Blow said. “That’s all they teach you. But that’s not the whole King. What people are complaining about is, ‘My premium is going up to save somebody else’s life who I don’t care about.’ That’s the argument: ‘I want my premiums to stay lower and if someone dies, that’s their business, I don’t know them.’”

Later, Blow cited a lesser-known speech in which the civil rights icon decried how many of the white people who relied on government subsidies were “the same folks telling black people to pick themselves up by their bootstraps,” in the columnist’s paraphrase. And Reid pointed out that King’s popularity began to dip when he called out Northern liberals for the kind of racism they looked down on Southerners for—and how big-city newspapers reporting on that issue were subsequently “rejected by a swath of White America as being liberally biased.”

Reid drew a line between that chapter and the one we are living through now. “I think there is a certain discomfort that media people have with this idea of seeming biased, and so people go out of their way to not offend the small-town person,” she said.

She also criticized the journalistic pursuit of “pure objectivity” as an unrealizable goal that can just as easily conceal truth as reveal it. She harkened back to an era when newspapers reported lynchings as if they were events on the calendar, while studiously avoiding value judgments on the “moral repugnance” behind them.

Faced with an administration that “lies blatantly and luxuriously,” Reid said, “The media has to change the way it operates.”

How? For one thing, Blow said, it’s important to not be “complicit in the crime.” Stop booking people “you know are lying” for interviews, even if that’s bad for ratings. (Yes, the name Kellyanne Conway did come up here.) Reid added that daily White House press briefings are almost certainly not the answer.

“At a certain point, the conversations are subtracting from the public knowledge, not adding to it. We need to have less access journalism and more investigative, probing journalism.”

When Charles asked when that might happen, Reid finally struck a hopeful tone—sort of.

“I really honestly think citizen journalism and good investigative journalism are still alive and well,” she said, and will be “our refuge in this horrible time.”