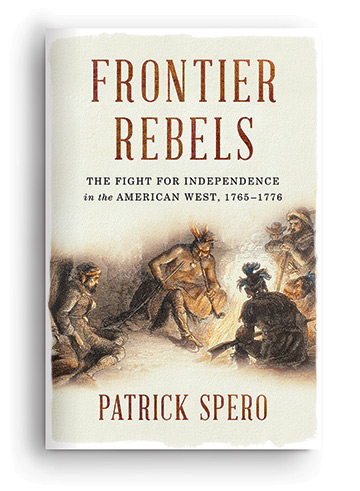 Colonial rebels, Native Americans, the British Empire, and Philadelphia’s Quaker elite clash in the years leading up to the Revolution.

Patrick Spero’s attraction to colonial history was only natural, considering where he grew up: in Sandwich, the oldest town on Cape Cod, Massachusetts. Taking frequent field trips to Plimoth Plantation and Boston, he “grew up fascinated with the Revolution, fascinated with the 18th century, because it was around me,” says Spero G’04 Gr’09, librarian of the American Philosophical Society in Philadelphia.

His first book, Frontier Country: The Politics of War in Early Pennsylvania (University of Pennsylvania Press, 2016), was “a history of Pennsylvania as seen from the West.” It revised the familiar notion of the frontier, popularized by the historian Frederick Jackson Turner in the 1890s, as a place that promoted individualism and democracy. In fact, “in the 18th century,” Spero says, “a frontier meant a zone of invasion,” and therefore of danger.

In the 1760s, frontier tensions spawned a group of activists called the Black Boys, for their blackened faces. As Spero writes inFrontier Rebels:The Fight for Independence in the American West, 1765-1776, the Black Boys—who may have numbered more than 200 at the movement’s height—distrusted Native Americans, the British Empire, and Philadelphia’s Quaker colonial elite. They expressed their views in targeted, if not exactly lawful, actions—by raiding an imperial pack train carrying goods, including weapons, meant to cement peaceful relations between the British Empire and Native Americans; by capturing a British officer; and by twice besieging Pennsylvania’s Fort Loudon. The result, Spero writes, was “a profound crisis of governing” that paralleled the growing restiveness against British rule in places such as Boston and Philadelphia.

Why tell the story of the Black Boys?

The sources on the Black Boys are just so dramatic. [Plus] when I taught at Williams [College], and I wanted to assign a book on the imperial crisis on the frontier, there was nothing that really captured that. I wrote this book to get at bigger issues on the frontier—Native American sovereignty, colonial views of Native Americans, how the British Empire thought they could manage this new territory.

It’s three stories that are interwoven: It’s the story of the Black Boys, who in 1765 stop a pack train of goods intended for an Indian treaty at Fort Pitt to bring peace to the frontier. They didn’t want Indians to have the arms and ammunition that they feared would cause more war. At the same time, there are those in Indian Country, particularly Pontiac, who are also coming to terms with this new British Empire and having their own ideas about what Native American independence and sovereignty should look like. So Pontiac marshalled a war from 1763-65 in order to assert Native American sovereignty. In the middle are the diplomats who are trying to navigate all these different views.

There’s been a dichotomy in the field between top-down, or ideological, history and grass-roots history. Is part of your project bringing those perspectives together?

In Frontier Rebels, I really hope to do exactly that—to marry low and high and to help explain the coming of the Revolution as seen from the West. One of the things I want to point out is that this rebellion, [involving] the Black Boys, happens in 1765, the same year as the Stamp Act, the same year that the Sons of Liberty are forming. On the frontier, there’s another rebellion happening that is, I think, just as audacious. The Black Boys destroy a pack train of goods that is worth thousands of pounds—an amount of destruction that is comparable to the Tea Party.

The Native Americans want the British Empire to protect them from the colonists and their land demands, while the colonists want to be protected from the supposedly murderous Indians.

Native Americans and the British Empire at this moment actually want essentially the same thing. Native Americans want stability, peace and trade, and protection from colonists. And the British Empire, now under an enormous amount of debt, wants stability and needs trade in order to bolster their economy, and the last thing they want is these rabble-rousing colonists upsetting order.

We’re seeing a lot more history told from the Native point of view.

There’s been a great revolution in the field, which has been integrating the history of Native Americans into historical understanding of early America. It has added so much complexity to the way we picture early America.

We were taught that the American Revolution was an unalloyed triumph.

That’s the view that we all as kids learned, but history is always far more complicated. And more interesting—and, in some ways, more relevant to the issues we face today, about minority rights, about the way the government treats individuals in groups.

What are some of the parallels and distinctions between the Black Boys and the Sons of Liberty?

One of the things I try to lay out is that there’s an imperial crisis. Events happening in the seaports surrounding regulations on trade, representation in Parliament, [are] mobilizing a wide swath of the population to become politically involved. Similar things are happening on the frontier. Here the Black Boys are complaining about representation in their colonial assembly. They, too, have issues with trade. But the Black Boys wanted to have a stronger regulation of trade while those in the seaports wanted less regulation and freer trade. And yet they come together in 1776, and they’re able to speak a common language. The commonality is a sense that the British Empire had failed them.

Are there any characters in your story that you see as heroic?

I don’t see anyone as heroic except for Pontiac. Pontiac and the Native Americans [are] able to marshal a major effort to push back the British Empire and to reassert their sovereignty, and they’re largely successful. But his is also the greatest tragedy. In the 1760s, he’s at the pinnacle of his career, and after peace he’s completely displaced, and he’s kind of adrift and ultimately is murdered [most likely by rivals].

It seems as though the Revolution was bad news for Native Americans. You draw a very interesting connection to our first frontier president, Andrew Jackson, associated today with Indian removal.

I try to trace the way the patterns persist in American history. The Black Boys believed in Indian removal. They see Native Americans as inherent enemies. And that pattern persists and really culminates with Andrew Jackson, who is, in many ways, the inheritor of these traditions.

What about counterforces in American history?

Why didn’t their advocacy succeed?

Because the Revolution empowered the Black Boys. That idea of equal representation actually gave the frontier control over the government in a way they didn’t have before.

Then became the policy. One of the other legacies that I hint at is the divide between East and West—this fear of not only Native Americans, but of an Eastern elite that is unfeeling, whose interests do not align with those on the frontier. This tension between East and West persists in Pennsylvania and in the nation more generally. I think those tensions have always been a part of the American experience.