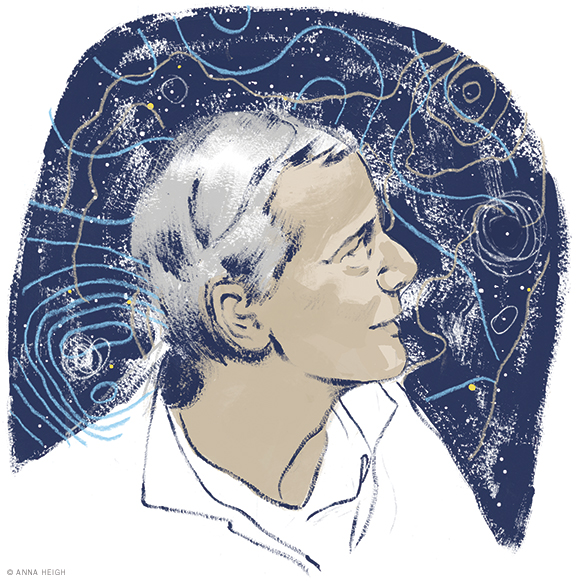 Penn astrophysicist Bhuvnesh Jain remembers precisely when he realized that physics was for him. He was 15 years old, and an out-of-town wedding had taken him away from his home in Jaipur, India. “I was bored out of my mind with the four days of wedding rituals,” Jain remembers. “So I holed up in a cousin’s bedroom. He had these Russian books on quantum mechanics, which I did not follow, but something made me decide, ‘This is really cool—this is what I want to do.’” By the time he went to college, that spark of interest had become an “obsession” that beckoned him deeper into the fundamental mysteries of the universe.

Jain’s teenage epiphany led eventually to MIT, where he got a PhD in physics in 1994, and later to Penn, where he joined the faculty in 2001. He is currently the Walter H. and Leonore C. Annenberg Professor in the Natural Sciences. He has made a name for himself in physics partly by developing tests for emergent theories and perplexing astronomical observations. For example, he has developed an authoritative method of using pulsating stars known as Cepheids to assess theories in which gravity is enhanced by a hypothesized “fifth force of nature,” an idea that has been proposed in recent years, but not proven. His test revealed no unexpected variation from Einstein’s theory of gravity, and he showed that the strength and range of a fifth force are subject to tight constraints. Jain has earned a reputation for his skill with “gravitational lensing,” which is a means of gleaning information about the structure of the universe from the way light bends around massive astronomical objects.

Jain is also a leader in fostering international collaboration, having co-founded, with Stanford astrophysicist Steven Kahn, the Dark Energy Science Collaboration (DESC), a joint effort involving hundreds of scientists. And at Penn, in addition to teaching undergraduate and graduate courses in cosmology and astrophysics, Jain co-founded the Penn Center for Particle Cosmology (CPC), which he continues to direct with co-founder Mark Trodden, the Fay R. and Eugene L. Langberg Professor of Physics.

That center, which brings together students, experimentalists, and theorists, reflects Jain’s approach to the big cosmological questions. As Jain puts it, the CPC supports “the meeting of the infinitesimal with the cosmic.” In other words, sometimes the secrets of the subatomic realm are best sought in the vastness of interstellar space, and vice versa.

“When the universe was a fraction of a second old,” Jain says, referring to the earliest stages of the Big Bang, matter interacted “at much higher energies and much higher rates than we can achieve here [even with state-of-the-art particle accelerators], and the interaction produced products like new particle species.” Because the furthest reaches of space represent the oldest parts of the universe, Jain says, “cosmological measurements allow us to infer conditions when those particles were interacting rapidly.”

What has been particularly satisfying about the CPC, Jain says, is “seeing students and post-docs become totally conversant in these different fields and being able to pick ideas—say, from particle physics—and make a connection with an astronomical phenomenon.” He adds, “I think it is fair to say that it is pretty unusual and challenging, given the way sciences are more and more specialized, to achieve this—especially for students.”

DESC, for which Jain now serves as an emeritus spokesperson, is an international effort to map the universe in unprecedented detail. This will involve trying to understand dark energy and dark matter, using data from the Large Synoptic Survey Telescope (LSST), which is currently under construction in Chile.

Cornell University cosmologist Rachel Bean, DESC’s current spokesperson, says that the organization focuses on creating modeling programs, analytical tools, computer software, and algorithms that will be used to make sense of the LSST’s data. “We are trying to build the software and the computing infrastructure to be able to cope with the size and complexity of data in advance,” she says, “because when the spigot gets turned on, and the data starts to come, we want to be ready to analyze it.”

Bean credits Jain with building the organization into a wide-ranging and collegial network of scientists whose expertise runs from neutrino physics to gravitational theory. “Bhuv was very instrumental,” she says, in “setting the tone.”

Some of Jain’s contributions to the field come from gravitational lensing. He was drawn to the method as a post-doctoral fellow at the Max Planck Institute in Germany, where he was investigating how fluctuations of energy at the dawn of the universe influenced its structure and development by means of gravity. Gravitational lensing highlights some of the most beautiful phenomena in astronomy, like Einstein rings, which are remarkable displays of light that appear to form haloes around stars or stellar groupings because of the way gravity bends light from a more distant source.

For its mapping effort, DESC will employ weak lensing, a variant of gravitational lensing and another of Jain’s specializations. It involves the use of mathematics and statistics to ascertain more-subtle variations in galactic structure. Jain says weak lensing will play a prominent role in the most ambitious mapping of the universe to date.

Jain also loves teaching, especially an undergraduate course that serves as an introduction to cosmology and gravity. “It is a calculus-based course,” he says, “but is taken by students from many different majors, ranging from economics to engineering—and of course including physics. It is really fascinating to see these students encounter cosmological ideas for the first time.” The field is continually enriched by new discoveries. The last time he taught the course, for instance, the discovery of gravitational waves by the Laser Interferometer Gravitational-Wave Observatory (LIGO) had recently been announced. “So I changed the syllabus and did two weeks on gravity waves,” Jain says, “and [students] were really thrilled.”

Amanda Farah, a junior physics major, recalls being in that iteration of the class. She says she especially loved the LIGO part, and calls Jain’s course her favorite so far at Penn. Not only does he have a relaxed and caring attitude toward students, she says, he has also been a valuable resource as she mulls whether to pursue physics or medicine after graduation. “He really cares about people, as well as being amazing with his physics work,” Farah says.

Jain’s fascination with the beauty of the cosmos seems to have rubbed off on her. “The most dazzling thing for me about the universe is what it has done by itself,” she says. “From an initial condition and the laws of physics, the way it has progressed and done intricate things—life, and us, and also this crazy filamentous dark-matter web, and other really complicated things like neutron stars, galaxies—all of them just came from a simple thing and some simple laws of physics. That’s what I love.”

For Jain, studying the universe has brought both scientific and aesthetic satisfactions.

“My personal fascination is driven in equal parts just by the naïve beauty of things. I just love looking at pictures of distant galaxies,” Jain says. “And I love the idea that as we look further and as our telescopes get better, we are looking further back in time, and glimpsing the epoch when they formed. So that is one visceral appeal that goes beyond the questions of fundamental physics or the fate of the universe—which are also certainly a big part of what draws me to cosmology.”