The fatal scourge of child maltreatment has a tragic enabler: the ethical code of professional social workers. 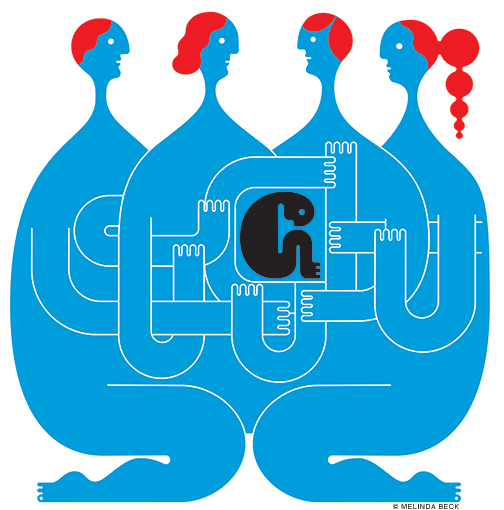 By Richard J. Gelles | When Philadelphia Assistant District Attorney Ed McCann asked me if I would review materials of a case that was to be presented to a Philadelphia grand jury, I accepted with concern. I knew something about the case of 14-year-old Danieal Kelly, who died on August 4, 2006. My first knowledge of it came when our school’s associate dean for student affairs alerted me that the FBI was interviewing one of our Master of Social Work (MSW) students. When I asked for more details, I learned that our student had been assigned to Danieal’s case as part of his internship with a local social service agency. The agency, MultiEthnic Behavioral Health, owned and operated by one of the school’s graduates, was a longtime field placement for the school. I knew a little bit more from conversations with reporters from the Philadelphia Inquirer who were working on an investigation of the Philadelphia Department of Human Services (DHS).

Even with some foreknowledge, I was completely unprepared for what I read in the case materials. As detailed in the 263-page grand jury report, Danieal, who had cerebral palsy, wasted away while supposedly under the watch of DHS and MultiEthnic Behavioral Services. When she died in a urine-soaked bed, Danieal weighed 42 pounds and had bedsores that nearly reached her bones.

After the grand jury report, McCann and the District Attorney’s Office proceeded to prosecute Danieal’s parents, family friends, DHS employees, and the owner and employees of MultiEthnic Behavioral Health. In the end, 17 individuals were either convicted or pled guilty to charges ranging from perjury to third-degree murder.

As I met with McCann to prepare for my grand jury testimony, he and his associates continued to ask me the same question: How could social workers and supervisors whose job it is to protect children allow a 14-year-old to slowly starve to death? While some caseworkers had falsified their records, and recorded visits they never made, other caseworkers did visit the Kelly home and most certainly had at least peeked into Danieal’s room. And yet Danieal died a slow death in a hot, dark bedroom.

My answer probably did not convince McCann and his associates. I said that the workers—not merely the incompetent ones, but the best ones as well—tend to see parents, not children, as their primary clients. Despite the fact that the agencies are named “Child Welfare” or “Child Protection,” their real mission focuses on providing services to parents and caregivers. If there is a “fatal” flaw in the American child welfare system, it is the fact that the system does not see vulnerable children as its primary clients.

“Ethical Principle: Social workers challenge social injustice. Social workers pursue social change, particularly with and on behalf of vulnerable and oppressed individuals and groups of people. Social workers’ social change efforts are focused primarily on issues of poverty, unemployment, discrimination, and other forms of social injustice. These activities seek to promote sensitivity to and knowledge about oppression and cultural and ethnic diversity. Social workers strive to ensure access to needed information, services, and resources; equality of opportunity; and meaningful participation in decision making for all people.”

Given that the current model explains child abuse and neglect as a function of poverty, stress, and oppression, this axiom directly influences social workers to focus their attention on those problems, rather than simply protecting children. The professional emphasis on pursuing social change—particularly with, and on behalf of, vulnerable and oppressed individuals and groups—means that caseworkers and supervisors see parents as the actual clients of the child welfare system. This is the obvious consequence of social change efforts that focus primarily on issues of poverty, unemployment, discrimination, and other forms of social injustice.

Legal precedents also reinforce the culture of the parent-as-client. In the most important Supreme Court ruling in the child welfare field, Smith v. Organization of Foster Families for Equality and Reform (1977) , the court held that the Fourteenth Amendment gives parents a “constitutionally recognized liberty interest” in maintaining the custody of their children “that derives from blood relationship, state law sanction, and basic human right.” Of course, the right is not absolute, because of the state’s power and authority to exercise parens patriae duties to protect citizens who cannot fend for themselves. The state may attempt to limit or end parent–child contact and make children eligible for temporary or permanent placement or adoption when parents (1) abuse, neglect, or abandon their children; (2) become incapacitated in their ability to be a parent; (3) refuse or are unable to remedy serious, identified problems in caring for their children; or (4) experience an extraordinarily severe breakdown in their relationship with their children (e.g., owing to a long prison sentence).

Nevertheless, the result is a system that is reluctant to remove children from their birth parents. Caseworkers, supervisors, and administrators make every possible effort to keep or reunify maltreated children with their birth parents. Child welfare systems are also sensitive to the issue of racial disproportionality—the fact that African-American children and families are reported for child abuse and neglect more frequently than whites, and minority and African-American children are both disproportionately placed in foster care and stay longer in foster care compared to white children.

There are two important problems with the “parent-as-client” child welfare system. First, parents who maltreat their children are difficult to change. Second, the interventions that are employed by the child welfare system, such as Intensive Family Preservation Services or Family Group Conferencing, have had limited success in creating safety for maltreated children. The singular successful program is a prevention program titled Nurse Family Partnerships.

Fortunately, child fatalities such as that of Danieal Kelly are somewhat rare—there are about 2,500 child-maltreatment fatalities each year, of which approximately half involve children and families known to child welfare agencies. But the parent-as-client model also has detrimental consequences to children who suffer non-fatal maltreatment. Frankly and bluntly stated, children’s development is held hostage while child welfare agencies implement interventions in the hope that parents can and will change.

We have now more than a half-century of experience with a parent-as-client child welfare system, and the safety and wellbeing of maltreated children still cannot be ensured. It is time to set our sights on a narrower goal—which is also an achievable one. The child welfare system will never be effective unless and until it places the child as the client, makes decisions with the child’s safety and well-being as the most important consideration, and makes decisions with a child’s sense of time.

Richard J. Gelles holds the Joanne and Raymond Welsh Chair of Child Welfare and Family Violence in the School of Social Policy & Practice. He is the former dean of the school and author, most recently, of Out of Harm’s Way: Creating an Effective Child Welfare System (Oxford University Press, 2017).