A once-lively cheesesteak haven shuts off its grill for good.

“Everyone has their own story about this place.”

It was a Friday in late April, and Mike Badlis stood near giant tubs of Cheez Whiz and sliced banana peppers, watching a bigger-than-usual lunchtime rush at Abner’s—University’s City’s preeminent cheesesteak establishment for much of the last four decades.

When Badlis, the restaurant’s manager, first learned the lease to its space on 38th and Chestnut wouldn’t be renewed, he cried. Then he began packing things up and trying to sell the memorabilia that helped tell that story.

There were old pictures of various Penn sports teams on the shop’s walls, as well as photos of fraternity fundraisers and of the “youngest child to eat a cheesesteak at Abner’s.” (He was 21 months old.) There were letters from coaches saying how much they enjoyed taking recruits to Abner’s, and framed Daily Pennsylvanian articles recounting times the restaurant became overrun with fans after the Penn basketball team scored 100 points to trigger its crowd-pleasing free cheesesteak promotion.

Since 1983, Abner’s had become an indelible slice of Penn campus life (and Drexel too), part of a quirky corner that once included a Chili’s, a basement “gentleman’s club,” and more recently, the popular fast-casual Korean restaurant Koreana. But when the parcel on 38th and Chestnut was recently sold to make room for the construction of a 13-story life sciences office tower, Koreana and Abner’s had to clear out by the end of April.

Badlis doesn’t have plans to try to open the cheesesteak, hoagie, wings, and pizza spot elsewhere. “Abner’s has to be here,” he said. “If it’s not here, then it’s not Abner’s.” Even before losing its lease, the eatery’s popularity had been dimming, and the pandemic further decimated business. But few places around Penn can boast a heyday quite like Abner’s, which was opened by Abner Silver, the late owner of the famed Jim’s Steaks on South Street. And in its final days, many alumni passed through the store to pay their respects.

“I haven’t seen this kind of rush since before COVID,” marveled Badlis, who started working at Abner’s in 1999 before becoming a partner. “There used to be a lot of action here,” he added, recalling nights in the ’90s when students packed the joint until 3 a.m. “This place has history.”

Elisabeth Leiderman C’98 WG’07 happened to stop by two days before it closed because she was in town from New York with her son for a Penn tour. “This was my favorite spot on campus,” Leiderman said, as she watched Helen Robinson cook up steaks for her and her son. Robinson spent 38 years on that grill, telling customers that she raised her kids on the job. “I don’t know what I’ll do now,” she lamented.

Paul Weidner, who works in Penn’s Division of Finance, rushed over when he heard about the closure so he could have one last Abner’s cheesesteak—though he ended up scarfing down two while recalling the time in the early 2000s he raced from the Palestra to the restaurant to exchange his ticket stub for a free steak. He had left a couple of minutes before the game ended (when it was clear Penn would reach 100 points) and even left his wife behind. But as he trekked the half-mile across campus in boots that felt like cement, “all these kids started passing me,” he laughed. “The next thing I know, I’m 80th in line.”

Why wait that long for a single cheesesteak? It was about more than just saving a few bucks. Ask any hoops fan from the ’90s and early 2000s and you’d likely hear a similar story about running from the Palestra to Abner’s, or keeping tabs in their head to see if the Quakers were on “cheesesteak pace” (10 points every four minutes of game play). “It was part of the game for them,” Badlis said.

The Penn players knew about the promotion too—and would cheer as wildly as the fans when the team reached 100 points (a rare feat in college basketball). And the player who hit the shot to put them at the century mark—often a reserve only on the court because the Quakers were winning by so much—would be showered in cheesesteak glory. It’s hard to overstate the reaction when Dan Solomito C’02 took a pass from Duane King C’03 and buried a three-pointer in the final seconds of a 100–62 rout of Dartmouth on February 16, 2002. In a Daily Pennsylvanian article published the next day, one Penn student was quoted as saying, “Dan Solomito is the king.” Another said, “Solomito is a god.”

When he arrived at Abner’s after the game, Solomito—then a senior who played sparingly on some excellent Penn teams—was serenaded with the same “SO-LO-MI-TO” chant that used to echo throughout the Palestra when the Quakers got out to big leads and fans wanted head coach Fran Dunphy to empty the bench. His cover blown, Solomito made sure to apologize to his friend behind the counter, who shook his head and chuckled, before taking his steak (provolone “wit”) to go because he felt uncomfortable with so many eyes on him.

“I remember kind of saying to myself, Do I get in line? And then everyone sees me and started the chant and ushered me in, in front of everyone,” recalled Solomito, who lives in Brooklyn and has worked in the music, copywriting, and restaurant industries. “It had that celebrity-walking-into-a-club feel.”

Before graduating from Penn, Solomito told the Daily Pennsylvanian that he “wouldn’t be surprised if I see someone in 10 years and they remind me of it. My mom will have that copy of the newspaper forever.” Indeed, 20 years later, Solomito’s name remains etched in Penn hoops lore, along with the other players who hit “cheesesteak shots”—Nate Allison W’99, Patrick Lang C’05, Brian Grandieri C’08, and Ray Jerome C’20—before the Abner’s partnership with Penn Athletics ended a few years back and a Penn tradition that had taken on a life of its own died.

“Whenever I reconnect with classmates and we speak about our Penn days, it always comes up,” said Solomito, who called Abner’s a “special place.”

“I can only speak to my time there,” he added, “but I can say that for four years, whether it ended up happening or not, everyone at the school, everyone who came to games, and everyone in that locker room knew that if we scored 100 points, we were going to Abner’s.” —DZ 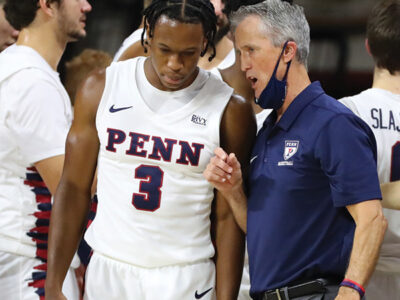