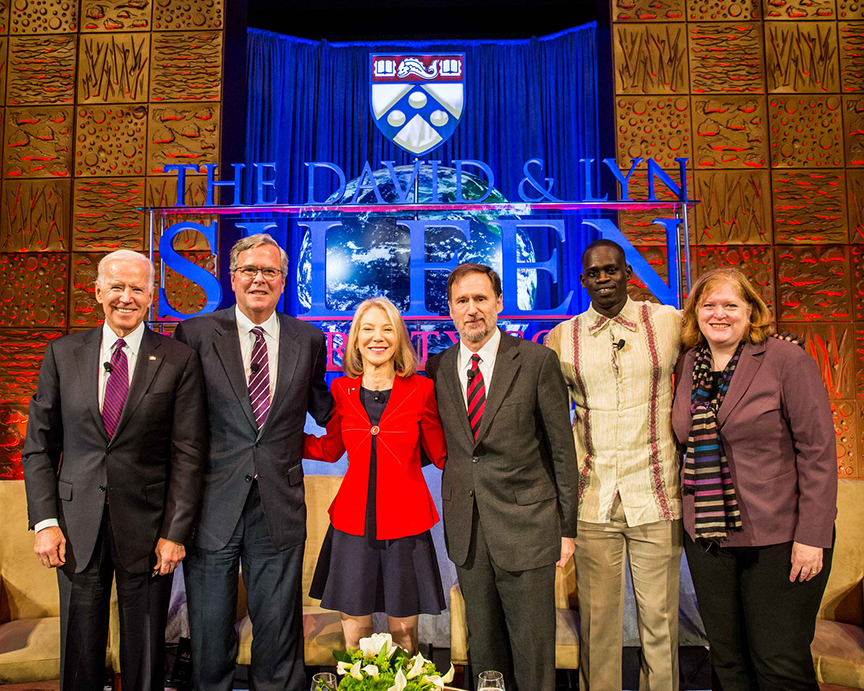 The 2018 Silfen Forum focused on refugees and asylum seekers.

Back on campus for the first time since he graduated, Dau Jok C’14 entered Irvine Auditorium with a nervous smile. “Pray for me,” he said, just before joining a panel discussion on immigration and refugees packed with political heavyweights. Former vice president Joe Biden and former Florida governor Jeb Bush headlined the February event, along with Penn president Amy Gutmann, Columbia professor Michael Doyle, and Anne Richard, who served as the assistant secretary of state for population, refugees and migration in the Obama administration.

Jok, by far the youngest panelist invited to the annual David and Lyn Silfen University Forum, turned out to have little to worry about. When it was his turn to address the capacity crowd in Irvine Auditorium, the former Penn basketball player had his fellow panelists nodding in agreement as he lamented that empathy is often missing in debates about the global refugee crisis.

“One thing everyone needs to understand is that most refugees, if they had a choice, would not leave their homes,” said Jok, who runs the Dut Jok Youth Foundation, an international nonprofit that aims to empower South Sudanese youth through sports and academics. The organization is named after his father, who was murdered during the Second Sudanese Civil War, causing Jok to flee to Iowa, with his mother and siblings, when he was 11 years old.

“We need to see them as people, first and foremost,” he continued. “They’re regular people, just like everyone else in here. On a human level, they have desires, hopes, and dreams. To me, what America represents is opportunity. I argue every day: I remain optimistic that America is the greatest country in the world.”

Why, then, has immigration become such a heated and polarizing issue in the current political climate? And what policies could better serve the 65 million people, according the United Nations, who have been forcibly displaced worldwide because of persecution, conflict, or human rights violations? Those were two of the questions posed by Gutmann, who moderated a discussion titled “People and Policy Adrift: A 21st Century Framework for Asylum Seekers, Refugees, and Immigration Policy.” (She kicked it off by calling the issue “deeply personal” for her, as the daughter of an immigrant refugee who fled the Nazis.)

Doyle—who, in addition to being a renowned scholar of international affairs, is Gutmann’s husband—insisted that there needs to be “shared responsibility” so neighboring countries like Jordan aren’t overwhelmed by refugees escaping war-torn Syria. Too often, he said, nations receiving large numbers of refugees are small, poor, and ill-equipped to bear the cost of providing asylum, thus creating a slew of additional problems. “We need a system of sharing by capacity, not proximity—meaning some arrangement where countries will recognize we’re all in this together,” he said, adding that world leaders should borrow some ideas from the Paris climate accord, where countries came together to have a “global conversation.”

Biden agreed with Doyle’s overarching point but pushed back slightly in its framing, arguing that a typical American trying to provide for their own family might not care about a global responsibility. “It’s important for us to make the case for everyone why it’s overwhelmingly in their naked self-interest to do this as well,” he said. “It’s not only a humanitarian notion of justice and honor.” Biden framed shared responsibility as a sort of geopolitical insurance policy. If US allies like Germany take in more refugees than they can handle, he suggested, they may be weakened to the point where “populism rears its ugly head” while enemies gain strength. “It’s a fundamental threat to American security for this to happen,” Biden said.

Bush agreed with that point. “[If] Jordan becomes unstable because of the massive number of people inflicting real challenges on the country, then the whole Middle East would be turned upside down,” he said. And he thinks American citizens need to be better educated not only about the potential consequences of refugees flooding certain countries, but about the thorough screenings that all refugees go through before being resettled in the US. “You can believe ‘America first’—I do,” Bush said, taking a phrase from his Republican rival in the 2016 presidential election, Donald Trump W’68. “But ‘America first’ means we lead, and we lead across the board.”

Despite their opposing party affiliations, Bush and Biden spent much of the panel agreeing with each other and trying to dispel various fear-stoking myths that are pervasive on the far right.

Bush, whose wife is Mexican-American, expressed dismay that 1.8 million “Dreamers” have been left in limbo by the current government despite evidence that a large majority of Americans believe they have a right to residency. “Talk about frustrating,” Bush said. “Even when it’s 85 percent popular, Washington seems to add all the other things to make it more complicated.” And while he characterized himself as a proponent of increased border security, he laughed off Trump’s plans for a $25 billion border wall, noting that half of undocumented people overstayed their legal visas and that more Mexicans have been leaving than entering the US in recent years. The focus, he argued, should be on better technology on the border and a serious effort as it relates to visa overstayers because “making legal immigration easier than illegal immigration is a logical thing to do.”

Biden stressed how important immigrants have always been in fueling economic growth and noted how vital it is to break through the demagoguery that causes people to believe the opposite. “Ask yourself a simple rhetorical question,” said Biden, who now serves as the Benjamin Franklin Presidential Practice Professor at Penn. “This is a pretty damn good country. The 1.9 million kids who are contributing to the economy, is there not enough room for them?”

Gutmann made her own commitment to DACA recipients in late November when she signed a declaration that stated “Penn is and always has been a ‘sanctuary’—a safe place for our students to live and learn.” When she steered the conversation toward students, Biden declared that “everybody graduating with a PhD from an American university should get, as they walk across the stage, a seven-year visa attached to it.”

Richard, who has served as a visiting fellow at Penn’s Perry World House, expressed a similar sentiment about the importance of the role of students—and colleges—in shaping the narrative. “University professors can speak up, as they are doing, on the importance of having international students,” she said. “University professors can point out how much we learn from bringing in people from overseas. And university students can be the most effective activists we have when organizing on behalf of keeping our doors open to what the rest of the world has to offer us.”

In the end, Richard said, we should always aim to be sympathetic to people who want to better themselves by moving—and not “be surprised when people who come when vulnerable turn out to be super successful.” Doyle also talked about “speaking to people’s hearts,” in the sense that there’s a “direct correlation between a willingness and welcomeness toward immigrants and refugees and knowing one or having a friend who knows one.” And Biden, ever the optimist, is steadfast in his belief that the vast majority of Americans are not xenophobic and that the nation is actually less split on the immigration issue than it was when he was first elected as a US senator in 1972.

Perhaps that’s why Jok remains so hopeful, despite all the reasons not to be. During the panel, he recounted two episodes that had challenged his feeling of belonging in the US. The first was when a TSA agent picked him out of a crowd of 10 people and asked what he was doing in the US, even while holding his American passport. The second happened while Jok was serving in the US Army Reserves (which he does, while pursuing a PhD in education at Drake University, as a way to give back to a country that made him a citizen). A colonel assumed he was there as an international, despite the fact he was wearing the same uniform as everyone else. “In those moments, I felt like the other,” he said. But he said he didn’t feel any animosity.

“The point of bringing up the story is that as human beings we just need to pause to think, to connect, to talk to people,” he explained off the stage. “It’s remarkable what we’ll understand, how our perspective will change, and how much more empathetic we will be—because that’s what we need more than anything else.

“America remains to me the best hope for humanity. We have to see that. And we have to do better.” —Dave Zeitlin C’03