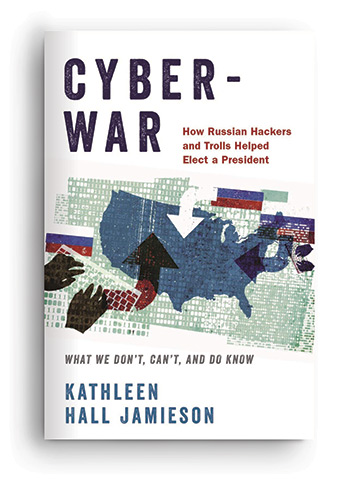 With a title like Cyberwar, this was a book I had to pick up. After all, I wrote a book with the same name 10 years ago. (Yes, it’s quite legal to copy the name of someone else’s book.) Kathleen Hall Jamieson’s volume, however, turned out not to be about what the Pentagon would call cyber war.

To the US military cyber war entails the use of software weapons such as viruses, worms, wiper attacks, and denial of service techniques to do what a kinetic or conventional weapon would do. One example would be when the United States rendered 800 Iranian nuclear centrifuges permanently inoperable several years ago. Russia’s 2015 attack on Ukraine’s power grid is another.

Jamieson—a longtime Penn faculty member who is the Elizabeth Ware Packard Professor of Communication at the Annenberg School for Communication and the Walter and Leonore Director of the Annenberg Public Policy Center—has instead written about what the Russian intelligence apparatus calls false flag operations (appearing to be someone else), disinformatia (invented news stories), and kompromat (leaked files that damage a target’s reputation). Russian use of these tools not only predates the internet, Moscow’s secret police used them before the Russian Revolution. And the US has been the target of them for decades. One example of disinformatia against the US involved the Wistar Institute, a biomedical research organization on Penn’s campus. During the 1980s, Russia spread a lie that Wistar had invented HIV/AIDS for the US government. Russia has also targeted European elections with these techniques for decades.

The internet and social media supercharged these intelligence tools. Moscow paired influence operations with computer networks to manipulate elections in several nations, including Ukraine, Georgia, and Estonia. Thus, it is not news that Russia uses these tools, that the US is sometimes the victim, that Moscow has combined the tools with the internet to great effect, and that elections have often been their target.

What was new in 2016 is that Russia targeted an American presidential election with a major influence operation. Our slowness to recognize it and react appropriately was arguably a product of what I call initial occurrence syndrome—a propensity to disbelieve or undervalue a phenomenon because of a cognitive bias involving first-time events. R. P. Eddy and I explored that concept in our 2017 book Warnings; and in What Happened, Hillary Clinton writes that this bias played a role in her campaign’s and the Obama Administration’s failure to understand the power of the Russian influence operation.

What the Obama administration knew, what they did, and what they chose not to do is a fascinating story, though untold in Jamieson’s book. Also missing is the infuriating tale of Facebook: what they knew and when they knew it. Nor does Jamieson provide the historical context of Russian influence operations or a detailed analysis of the motivation and risk calculus of the Putin regime for such a blatant attack on America.

Jamieson’s expertise is not in national security and intelligence but in television and polling. She summarizes what Special Counsel Robert Mueller and the US Senate Select Committee on Intelligence reported in unclassified indictments and reports: Russian intelligence used false personas on social media, hacked and then leaked compromising information, and created fictitious stories, all to undermine the Clinton campaign.

What this book does provide—which some readers may not have seen before—are images of Russian social media postings. A great many American voters would find the propaganda almost laughable, but it was apparently effective on their target audiences. In addition to encouraging non-college-educated white audiences to support Trump, they also urged African Americans to stay home on election day because Hillary did not agree that Black Lives Matter. Haitian Americans were told that Bill and Hillary somehow personally profited by helping Haiti recover from its great earthquake. Green Party voters were encouraged to think that Trump could never win, so voting Green was a safe way to make a statement.

Jamieson asks whether this made enough of a difference to swing the election in Trump’s favor. Clinton won 2.8 million more votes than Trump. A change of a mere 0.006 percent of the total national vote, spread across three key states, would have caused a Clinton victory. Jamieson notes those three states (Pennsylvania, Wisconsin, and Michigan) were specific targets of the Russian influence operation. It is impossible to prove a counter-factual such as whether Clinton would have won those states were it not for the Russians. Nonetheless, Jamieson sifts through polling and other data in exhaustive, minute detail to provide a credible case that Russia did flip the traditional Democratic “Blue Wall” in those three “Rust Belt” states.

The author says we may never know what communication and coordination went on between Trump and his team and Putin and his—though other recent books have shown a credible circumstantial case involving numerous, longstanding links between Trump world and the Kremlin’s oligarchs.

Jamieson seems to accept the claims of state election officials that Russia did not alter voter data bases, voting machines, or vote reporting systems. On this question the absence of evidence should not be considered evidence of absence of Russian manipulation. Indeed, what we do know gives us room to be suspicious: Russia hacked into numerous of the states’ election data bases. Electronic voting machines have repeatedly been demonstrated to be easy to hack. And most states lacked the state-of-the-art detection systems and trained staff necessary to detect sophisticated Russian activity.

While not addressing many aspects of the Russian influence operation on the 2016 US presidential election, Jamieson’s volume does well document much of what is known about Russian intelligence’s use of social media, its timing, and how such activity was reflected in tracking polls leading up to the election. This subject is not just of historical interest. It could happen again in 2020.

Richard A. Clarke C’72 was a Special Assistant to the President of the United States with the White House National Security Council in three administrations. His ninth book, The Fifth Domain, will be out in July.