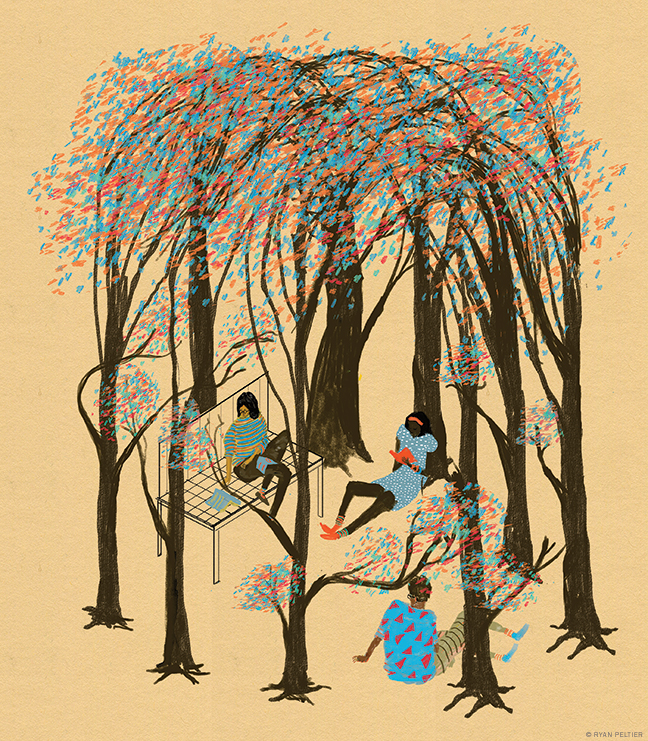 On November 30, in response to several letters and petitions from faculty and students, and in the midst of an emergent national student movement to establish “sanctuary campuses” that would protect undocumented-immigrant students from deportation, the University’s leadership issued a full-throated declaration that “Penn is and always has been a ‘sanctuary’—a safe place for our students to live and to learn.”

Although the statement—signed by President Amy Gutmann, Provost Vincent Price, and Executive Vice President Craig Carnaroli W’85—did not include the term “sanctuary campus” (which has lacked a precise definition), it offered an unambiguous message to Penn’s undocumented students.

“Let us be unequivocally clear,” they wrote. “We are and remain resolute in our commitment to Penn’s undocumented students, and will do all that we can to ensure their continued safety and success here at Penn.”

Gutmann is a supporter of immigration reform, particularly with respect to the Development, Relief, and Education for Alien Minors (DREAM) Act, which has been defeated in Congress multiple times since its original introduction in 2001. In 2012, President Barack Obama implemented a portion of the DREAM Act via an executive action creating the Deferred Action for Childhood Arrivals (DACA) program, which allows certain undocumented immigrants who entered the United States before their 16th birthday to pay a $465 fee in exchange for a renewable two-year work permit and exemption from deportation. To be eligible for DACA status, applicants must be either enrolled or graduated from high school or honorably discharged from the armed forces, and have committed no felonies or serious misdemeanors.

“These great students have grown up in our communities; they attended our schools; and they have both the strong desire and the impressive capacity to make vital contributions to our nation’s future economic strength and global competitiveness,” Gutmann wrote in a November 16 letter to faculty members.

Gutmann has advocated for the continuation and expansion of DACA. But the fate of that program and its beneficiaries was thrown into doubt by the election of Donald Trump W’68, who made hardline opposition to immigration a cornerstone of his campaign. One of Trump’s campaign pledges, published on the Immigration page of his campaign website, was to “[i]mmediately terminate President Obama’s two illegal executive amnesties” and “triple the number of ICE agents” to facilitate the deportation of unauthorized immigrants.

The University’s November 30 statement laid out several commitments to undocumented students at Penn:

The statement also noted the presence of advisors at the Greenfield Intercultural Center, Penn Global, and La Casa Latina to support “the specific needs of undocumented and DACA students at the undergraduate and graduate levels.”

“I’m very appreciative of the University’s response, because it is a critical moment right now to be ensuring that the campus is safe for its undocumented population,” said Tania Chairez C’14, who revealed her status as an undocumented immigrant during her sophomore year in a guest column for The Daily Pennsylvanian that was picked up by Huffington Post.

Chairez, who arrived in the United States from Mexico with her family when she was 5 years old, was a high-school valedictorian who applied to Penn after discovering the University’s policy of treating undocumented applicants as international applicants. As an undergraduate she co-founded Penn For Immigrant Rights, a student advocacy group whose activities include sponsoring an annual $500 scholarship to a Philadelphia college-bound student regardless of his or her immigration status.

Chairez was one of a group of undocumented students and alumni who drafted a letter to Gutmann conveying their concerns after the election. The Gazette spoke with four current undergraduates who identified themselves as undocumented. Some had exposed their status to public scrutiny in the past, but expressed fear about the fates awaiting them and their families under the next presidential administration. All four lauded their peers, faculty members, and University administrators for the response on campus.

Another, speaking on behalf of herself and two peers, said, “We’re excited to hear that the president has addressed our petitions and the letter we sent to her. And we’re very, very grateful for all the support we had in pursuing that—not only from staff, but from students.”

“It’s incredible how people are coming together,” she said. “I just really hope they’ll remember that solidarity when the going gets tough. If there’s any student at Penn who decides to do what I did and do civil disobedience, how will they support them? If there’s a student whose family member gets put into deportation proceedings, how are they going to support them? Those things are actually worrisome.”

Chairez and two of the current students have embraced public exposure in hopes of shifting national attitudes toward undocumented immigrants.

“I think there’s a need to go back to the ‘undocumented and unafraid’ strategy, where everyone would come out of the shadows and share their stories. I think there’s power in that,” said Chairez.

“If there’s one thing that a lot of Americans champion, it’s education,” said one student. “And just seeing an undocumented immigrant who is a college student—as opposed to a supposed rapist or a drug dealer, as Trump has said—that’s a counter-narrative that most of us feel needs to be out there.”

Nevertheless, they share some trepidation about the changing risks of public exposure, and although they did not request anonymity from the Gazette, the magazine has elected to protect their identities.

“The fear doesn’t go away, and just because I’m vocal doesn’t mean I’m not scared,” said Chairez, whose career in public advocacy distinguishes her from the student activists who have traveled partway down that path.

“But I really appreciate the fact that there is someone—and now many more people than just me—talking about this issue,” she said. “If we don’t talk about it, it makes it seem like the problem isn’t there. So I’m really glad that the undocumented students at Penn were able to come together and make their voices heard … I think it’s also important that [there was so much] support from other students, and alumni, and faculty.”

In their November 30 statement, Gutmann, Price, and Carnaroli declared that the University “will continue to forcefully speak out in support” of undocumented students, the DREAM Act, and DACA.

“We recognize that many in our community remain anxious about the future,” they concluded. “United, we will do everything in our power to ensure the continued security and success of our undocumented students. It is times such as these when we must hold even closer our cherished Penn values of inclusion, diversity, equity, and mutual respect.”