Convocation: “An Audition For Your Future Self” 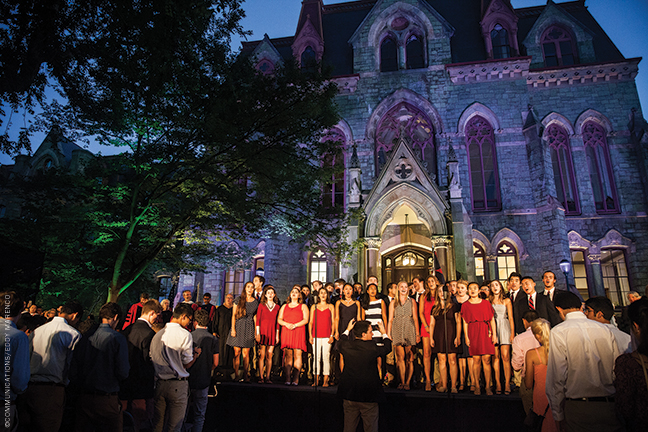 Engagement, discovery, and the rewards of community involvement have been common Convocation themes in recent years, and the University’s 277th academic year began with similar declarations. In an address focusing on the ramifications of personal choices, Gutmann emphasized that college presents an opportunity to grow and change.

“Choose something new,” she urged the Class of 2020. “Choose someone new. The most thrilling choices, the choices that add the most value, come from the unknown. They come when we choose friends and classes, clubs and activities that complement who we are becoming, rather than merely reflect who we have been before.”

She also noted that students’ decisions involve responsibilities as well as rewards.

“Your choices while at Penn also importantly extend beyond what occurs just here on campus,” Gutmann said. “Branch out into Philadelphia and West Philadelphia. And to take another non-random example, there’s a very big choice coming soon for every American citizen on November 8. I encourage every eligible voter in the Class of 2020, and transfers, to register and cast your vote in the upcoming election. And for all our international students, I encourage you to participate fully and robustly in our campus discussions on the issues.”

Provost Vincent Price offered further thoughts on the relationship between searching for personal truth and fostering resilient communities. He told the story of the University’s first provost, William Smith, who in 1758 was briefly jailed by the Pennsylvania provincial assembly for his printed criticism of its military policy. The attacks put him at odds with University founder Benjamin Franklin—yet Smith continued to teach class from his cell.

“Franklin and Smith shared the belief in the value of a broad-based practical education, with classes in English as well as in Latin, and in training for vocations other than the clergy—which was a somewhat radical notion at the time,” Price observed. “But though they may have shared an educational philosophy, they did not see eye to eye politically. Franklin, as you know, was a revolutionary. Smith was widely regarded as a Loyalist. And in fact, Smith was forced to leave Philadelphia.

“The two men disagreed bitterly,” Price said. “They built walls. But those walls became classrooms, and those classrooms became this University, an institution that has thrived for nearly three centuries—longer than the nation itself. And a community that thrives not despite our differences but because of them.”

This episode from Penn’s formative years “illustrate[s] a lasting truth,” Price concluded: “Successful communities are built by those who work together while still retaining their individualism, their essence. And … community does not mean uniformity, or even conformity. Here, you can become whomever you wish. And we promise, we’re not going to run you out of town.”

Price went on to echo Gutmann’s exhortation that an individual’s mandate in college is not just to be, but to become.

“Choose classes that seem a stretch, and join groups that seem different,” he said. “And if you don’t like what’s offered, start a new group.

“One of the truly great things about your situation tonight is that you are all new. Your past achievements have brought you here, but you are not defined by your past … Penn is a place for you to step out of those old social roles and try out a new one. It’s sort of like an audition for your future self. And not just one audition; you can try out as many times as you like, for many different roles. And you decide if you get the part.”