Breakthroughs in Superconductivity: An Accelerated Journey 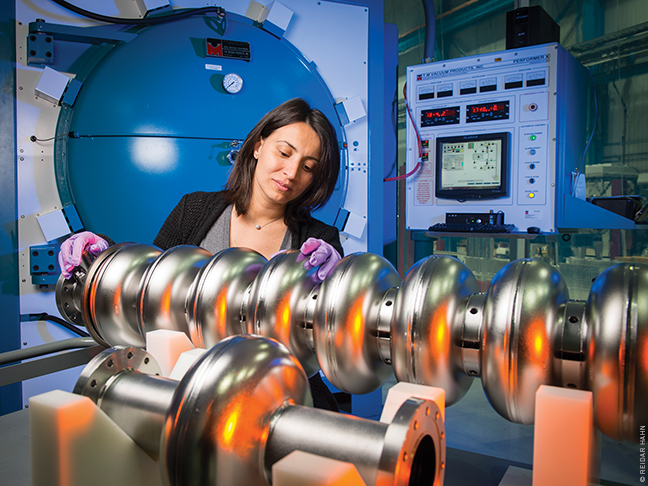 Both awards recognize her breakthroughs with superconductivity in particle accelerators, which propel subatomic particles to extremely high velocities, enabling physicists to probe the fundamentals of matter. (Accelerators also produce the most powerful X-rays for many fields.) More specifically, they laud her innovative nitrogen treatment of the accelerator cavities, which reduces resistance for beamlines of those high-velocity subatomic particles. The awards—which Grassellino says are “important recognition of the work, not just mine, but the team here at Fermilab”—come just two years after she received the Department of Energy’s Early Career Research Award, which has provided $2.5 million in research support over a five-year period.

Grassellino’s journey began in the Sicilian city of Marsala, and she fondly recalls the hometown math teachers who recognized and inspired her native talent. For her bachelor’s and master’s degrees, Grassellino went north to study electronic engineering at the University of Pisa, whose alumni include the likes of Galileo and Enrico Fermi.

“It is a very unique atmosphere at Pisa,” she says. “It has definitely given me a kind of a jumpstart on analytical skills that you always need and find later on when you go off and do research at a lab.”

In 2004, Grassellino spent the summer in a student program at Fermilab. There she met Penn physics professor Nigel Lockyer, then a lead experimenter at the lab and its director since 2013, who encouraged the summer students to pursue studies in advanced physics. The idea appealed to Grassellino, in part because she thought physics would foster her creativity. And so, the following year, she began her PhD studies at Penn.

“The University of Pennsylvania was really wonderful,” reflects Grassellino. “There was a good group of 15 students and the professors working very close with us. So it felt more like a family. The faculty was really impressive, and the campus experience was also great.”

After finishing her class work in Philadelphia, Grassellino went to Vancouver to do her PhD research at TRIUMF, Canada’s leading particle physics and accelerator lab. Lockyer, who taught at Penn from 1984 to 2007, was appointed TRIUMF’s director in 2007, and his Penn physics students had the opportunity to join him there for their research.

Given Grassellino’s focus on accelerator physics, it was a unique prospect.

After all, “they actually had accelerators,” she says, which meant she could get hands-on experience. “So I experienced the best of both: two years at Penn and then my PhD research at a big national lab with accelerators.”

At TRIUMF, Grassellino investigated the superconductivity radio frequency (SRF) fundamentals and technology of accelerators, and her dissertation focused on the breakdown of superconductivity in the inner cavities.

In Lockyer’s opinion, one of Grassellino’s outstanding traits “is her ability to really focus on a problem.”

“When you talk to her you can sense the focus and the intensity,” he adds. “She has had that since she was a young student.”

After TRIUMF, Grassellino returned to Fermilab as a post-doc to work on superconductivity. She began exploring how a new surface addition of nitrogen nitrite to the accelerator’s niobium cavities might improve performance. Though she and her group concluded that the nitrite mix did not enhance superconductivity, they noticed that once it was removed, some residual nitrogen, known as the “nitrogen tail,” significantly improved superconductivity.

It was an accidental discovery, Grassellino says. “We had an intuition it could be the nitrogen tail. Then we did a lot of analysis with samples on the cavities themselves, and we developed an understanding of what really happened.”

Her finding, which occurred in 2012, is now better known as “nitrogen doping.” It not only increases superconducting performance but should also reduce the costs incurred by the expensive cooling system attached around SRF cavities. It’s a major breakthrough, says Lockyer, who likens the accelerator cavities to a bell. “The higher the quality of the bell, the purer the tones, the longer the rings,” he explains. “If you were to ring the Liberty Bell during Ben Franklin’s time and it had the same property of our cavity—this ‘Q factor,’ we call it—[the bell] would still be ringing today. Of course there is a little resistance, and what Anna has done is reduce the resistance even further.”

Grassellino and her colleagues at Fermilab and Jefferson National Lab will soon be implementing her findings with the LCLS II electron beam accelerator, still under construction at SLAC National Laboratory at Stanford University. LCLS II will generate high-powered x-rays, superseding the currently operating LCLS I, which has enabled major findings in health and other scientific fields.

“Anna, by my measure, has had a huge impact on this project, because the performance has been enhanced substantially by her research, which is recognized around the world now,” Lockyer says. The LCLS II work is now at a stage in which private firms that supply accelerator parts are reproducing Grassellino’s innovation and offering improvements.

While the journey continues, for Grassellino it has also come full circle. The DOE award enables her to employ post-docs, whom Grassellino sees as representing the future. And there is real satisfaction in seeing ideas, intuitions, and hard work fulfilled.

“For me it has been very exciting that I can do research that is fundamental, really understanding the properties of superconductors and trying to modify these properties by tweaking at the nanoscale,” she says. “But perhaps because I have some background in engineering, I like that you can actually put it in practice and see it work.”