Bedtime Stories for the Aging 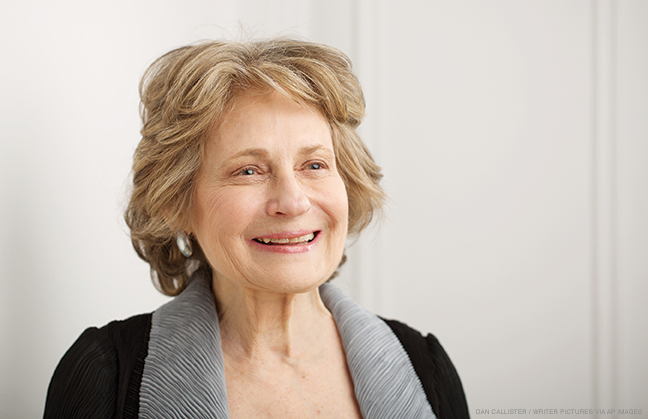 Arlene Heyman M’73 says she “wasn’t consciously trying to fill any gap in the literature ” with her frank stories about the joys and pitfalls of sex among the aging and the ill.

Then again, says the 74-year-old Manhattan-based psychiatrist, “I’m aware when I go to the movies that I’m always watching 20-year-olds and 30-year-olds. Boring! It is weird that nobody’s interested in old people. I try not to shy away from anything. You want flesh, blood on the page.”

Scary Old Sex (Bloomsbury USA, 2016), her debut collection, has received rapturous reviews here and in Britain since its late-winter publication, and has earned her an admiring New Yorker profile and a coveted interview on NPR’s “Fresh Air.”

“I’m only a little bit surprised,” says Heyman, who has three unpublished novels in the proverbial desk drawer. “And I should be more surprised. Because a collection of short stories by an unknown person—they just die.”

Revised repeatedly over the decades, Heyman’s stories chart a series of baggage-laden relationships. In “The Loves of Her Life,” a wife, both loving and resentful of her unromantic, Viagra-dependent husband, reflects that “making love was like running a war: plans had to be drawn up, equipment in tiptop condition, troops deployed and coordinated meticulously …”

“At the Happy Isles” recounts the turbulent interaction between a doctor-daughter and her incontinent 99-year-old mother as they revisit old slights. In “Night Call,” a son plots with his married father’s lover to cover up the father’s sudden death at her home. “Dancing” draws on a central tragedy in Heyman’s life—the death of her first husband, a psychiatrist, of leukemia.

But the tale most likely to catch the attention of literary sleuths is undoubtedly “In Love with Murray,” commemorating her romance-turned-friendship with Bernard Malamud, the Pulitzer Prize-winning novelist (The Fixer, The Natural) to whom the story is dedicated. Malamud (1914-86) had been Heyman’s undergraduate creative-writing professor at Bennington College and had praised her short story “The Priest,” which was based on her affair with a defrocked Jesuit. The teacher asked the young writer, whom he had not yet met, to stay after class. So began a two-year liaison (chronicled sympathetically in 2007 by Malamud’s biographer, Philip Davis) between the precocious 19-year-old and the 47-year-old married literary titan.

In the acknowledgements of Scary Old Sex, Heyman, paraphrasing W.H. Auden, describes Malamud as “a climate to me—his jokes, his Jewish atheism, his aliveness, his loving-kindness, his feeling for art and for me, his total immersion in literature, and, above all, his writing.”

“In Love with Murray” recounts an on-again, off-again May-September romance between two artists, Leda and Murray. “[W]atching her bite into the brave new world, sour as it sometimes seemed to him,” Murray finds Leda to be “an antidote to middle age.” Thoroughly smitten, she describes him as “the background music of her life, and the foreground music …”

When Heyman married her first husband, Malamud held one of the poles of the chuppah, or wedding canopy. “‘I feel that I am giving you away without losing you,’” she recalls him telling her. When he was sick, she took his blood pressure. “He said, ‘Did you ever think it would come to this?’ I said, ‘I’m glad to be able to do anything for you.’”

Heyman’s ambition was always to write fiction . After graduating from Bennington, she earned an MFA at Syracuse University, studying with the poet Delmore Schwartz. She taught English at a couple of New York colleges, and had some early literary success. But she feared that staying in an academic cocoon would limit her “knowledge about the world” and keep her “writing about writers and English teachers.” Encouraged by her own experiences on the couch, she decided to become a psychoanalyst—the hard way, by earning a medical degree.

After taking the barest minimum of pre-med courses (and never completing organic chemistry), she was accepted to Penn’s School of Medicine—one of 10 women in a class of about 200. It wasn’t easy, what with “all that science,” she admits. “It was a desperate loss of identity for me.” In her anatomy class, her otherwise all-male dissection team nicknamed their cadaver Arlene. Fortunately, a classmate, the late David Lynn M’74, stepped in to lend support; he would become a psychiatrist and lifelong friend.

While still at Penn, Heyman had dinner with the novelist Philip Roth, then teaching at the University. It wasn’t really a date, she says; their connection was a shared literary agent.

“He was absolutely charming,” she says. “So the only thing I was worried about was that I didn’t want to end up in bed with him, because to be the 3,479th woman to go to bed with Philip Roth doesn’t give you a good feeling.” She retains a foggy, possibly unreliable memory of having ended the evening by taking him to the anatomy lab, with its stink of formaldehyde, to see the cadavers.

Roth paid tribute to Malamud, a close friend, in his 1979 novel The Ghost Writer, in which the unhappily married writer E.I. Lonoff has a dalliance with a former student. “I remember saying to Bern, ‘How could he know this?’” Heyman recalls. Roth later said that the affair was pure invention.

Asked if she has a philosophy of sex, she responds enthusiastically: “Have it!” Then she offers a refinement. “When you have sex, especially with someone you care about, it’s a very naked act. You’re hoping it’ll work out, and that you’ll get pleasure, you’ll give pleasure, it’ll be kind, you won’t feel bad afterwards … It’s a kind of trembling act of faith.”

In her fiction, Heyman admits to poaching freely from her own life. (Among other events, she was widowed in 1997, has two grown sons from her first marriage, and is now married to a retired Queens College urban-studies professor, Leonard Rodberg.) But she steers clear of her patients’ secrets.

“Conducting psychoanalysis and writing fiction are, in some ways, opposite endeavors,” she says. “Because creating a character you start from nothing. You have a blank page in front of you, or a screen, and you’ve got maybe an idea—it’s usually a character trait—and you have to accrete, build up those characters.

“When you’re seeing a patient, you’re doing the opposite: You have the whole world that you are thrown into, the way the person is reacting to you, their symptoms, the childhood history, this wealth of information, and you’re trying to filter it.” In both cases, though, “you are using yourself—how you understand, how you feel”—and doing the work of truth-telling. “If you don’t tell some truths as a writer that other people don’t want to look at, what’s it worth? And also as an analyst, you have to tell truths to patients that they can’t get elsewhere.

“Kafka says that fiction is an ‘ax to smash the frozen sea within us,’” she concludes. “With your patients, you don’t want to take an ax to them. You have to tell the truth, but you have to find a way to do it that’s not jolting. In fiction, you can jolt.”