Actually, being made of wood, the carved figure at the bottom of the ground-floor stairway of the Arts, Research and Culture House, or ARCH (hence the nickname), maintains its habitual kind-of-melancholy expression. But if it can’t feel good, it definitely looks good—just like the rest of the building, which reopened in January after a $24.5 million makeover.

Built in 1928 and owned by the Christian Association until the University bought it in 1999, the late-Gothic Revival structure at 36th Street and Locust Walk has played many roles over the years. (Depending on your time on campus, you may remember the charms of whole-wheat pizza from the basement cafeteria or—in a happier dining era—settling in for a meal at the Gold Standard or Palladium restaurants, or a spot at the bar in the latter.)

Most recently, it has been home to the Center for Undergraduate Research and Fellowships (CURF) and the cultural-resource centers La Casa Latina, Makuu Black Cultural Center, and the Pan-Asian American Community House (PAACH). But that home, unfortunately, was in an increasingly dilapidated state.

Besides needing overall refurbishing and repair, the structure fell short of current fire-safety and access standards and was woefully lacking in IT infrastructure (not to mention adequate heating and any air-conditioning system). Restoring the building was among the goals of the Making History campaign, and an anonymous gift of $15 million in 2011 enabled the project to go forward [“Gazetteer,” July|Aug 2011].

In addition to providing much improved quarters to the student cultural groups and to CURF, the renovation, designed by SaylorGregg Architects, promises to recapture the building’s status as a major gathering spot on campus. The first floor features a large, open lounge area; several meeting rooms; and the first location of celebrity chef Rick Bayless’s Tortas Frontera chain outside of Chicago, with terrace seating outdoors on Locust Walk.

CURF occupies expanded space on the second and third floors, while the cultural centers are located on the ground floor. That’s where the most significant “intervention” occurred, says University Architect David Hollenberg GAr’76, providing the centers with a small increase in square footage but a “dramatic upgrade in quality and shared space.”

A new entrance off 36th Street gives direct access to the ground floor. The space features a common lounge area with banquette seating and tables and chairs outside the centers’ separate glass-fronted office space. Though below ground level, the room feels spacious because of the high ceilings and generous amounts of natural light, helped by the replacement of a brick railing outside by an iron railing. A gender-neutral restroom has also been added on this floor, part of an ongoing effort to incorporate these facilities in projects across the campus, says Hollenberg.

Throughout the building, all the woodwork, plasterwork, and architectural details—like the stained-glass windows, each of a unique design—have been carefully restored. Preservation work on the exterior included limestone carvings, four terracotta chimneys, and the slate roof.

The attention to period detail didn’t extend to the furniture, however, which was a deliberate choice. The idea wasn’t to “look like we were trying to create an old English club,” says Hollenberg. “The philosophy of the project was to restore the fabric, and then the stuff that goes in can be pretty contemporary.”

The biggest challenge was incorporating the systems of a modern facility into the shell of a nearly century-old structure. To meet requirements of the Americans With Disabilities Act, an elevator was installed, replacing the old (inoperative) chair lift. At the northern end of the building (closest to Walnut Street), the architects managed to find enough space for new construction to add restrooms on the second and third floors and a new fire-exit stairway.

Other added safety features included glass firewalls to limit the spread of smoke, and glass panels in formerly open window spaces overlooking the auditorium. Mechanical equipment is tucked away in unobtrusive spaces, and parts of the ceilings were lowered slightly to accommodate the new wiring. A flexible seating system allows the second-floor auditorium to be converted from a lecture-hall setup to tables and chairs or an open performance or event space, replacing a large classroom space lost to the new café.

“The completion of the renovated ARCH building marks a new focal point for cultural life on campus,” said Penn President Amy Gutmann in a statement. “The new ARCH celebrates the best of the building’s remarkable history while embracing technology and design to create a state-of-the-art hub for campus life. I’m pleased that this renovated building will support the diverse intellectual and social student experience that distinguishes Penn and adds to our eminence.”—J.P. 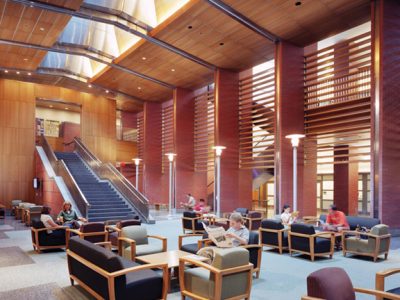