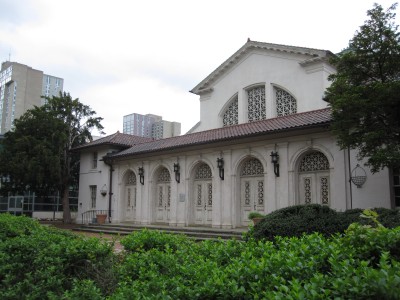 In 1911, fresh from their success with the New York Public Library, noted architects Carrère and Hastings turned their attention to Philadelphia. Known for their Beaux-Arts creations, the New York-based duo was asked to design a new house of worship for the First Church of Christ Scientist. The result was the Rotunda—a striking building that still stands at 4014 Walnut Street, but now with a very different mission.

After purchasing the building in 1996, the University transformed the Rotunda into the thriving and diverse performance space it is today. Both students and community members perform and attend a variety of arts events there, from concerts and film screenings to dance and theatrical performances.

Gina Renzi, the Rotunda’s director, was kind enough to meet with me to discuss the 100-year-old space’s history, architectural elements, and cultural offerings. Here is the resulting video, chock full of photos and interesting facts:

Also, if you happen to be in Philadelphia this weekend, the Rotunda is presenting three performances of Le Dada Va Gaga dans 2011—a site-specific dance/video work created for the Rotunda’s rarely seen sanctuary (seen in both the video above and the photo below). You can find all the relevant details on that performance here.