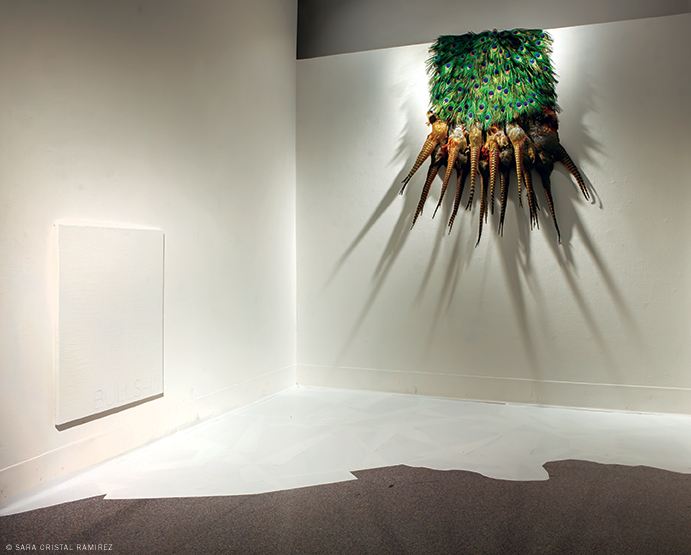 We found ourselves drawn to a number of pieces at the Charles Addams Fine Arts Gallery’s undergraduate exhibition last month. One was Entitled, Sara Cristal Ramirez C’17’s two-section piece. Given the title, we thought it might have some political undertones, but didn’t have a clue as to their nature. So we sent her an email, and she sent us her artist’s statement.

After citing the USDA’s definition of invasive species, Ramirez noted that “many animals in the US are not native to America,” and species that “cause harm or are likely to cause harm” are labeled invasive. But what constitutes harm? Some believe that an invasive species “hinders the agricultural and industrial economy”; others define it as one that is “taking over the territory or competing with another ‘native’ species.” Yet only “non-native” species raise the issue of invasive harm.

Pheasants were brought to the US in the 1800s to “provide beautiful birds for game hunters,” Ramirez noted, and the pelts and peacock feathers can be viewed as metaphors for “the bodies that come to this country”—often at the tacit invitation of the government—hoping for a better future. When they no longer provide economic or environmental benefit, they are sent back.

The second part of Entitled is a canvas whose “texture creates a layered effect, semi-obstructing the word bullshit,” Ramirez wrote. “Blending and hiding bullshit in everyday life is an art, seamlessly weaving things that you come up with on the spot into conversation and life occurrences.”

The two sections are connected by the vinyl US-Mexican borderline on the floor, “directly politicizing the pieces even when they can stand on their own.” —S.H.