When Push Comes to Shove 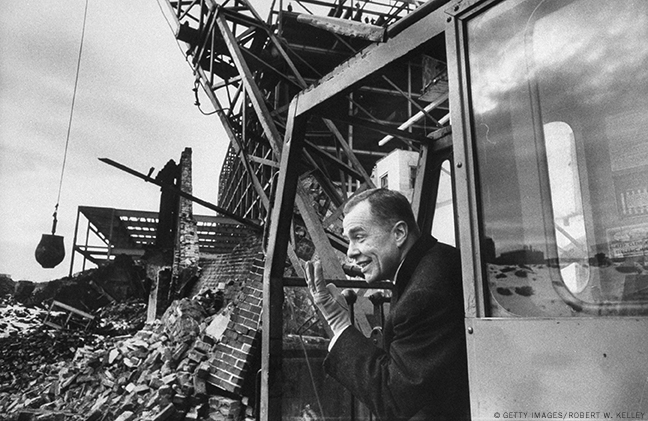 “When the axis powers are defeated and the time comes for distributing credit for the allied victory,” opined a Chicago Tribune writer in 1944, “an appreciable share should go to a machine that is constructed fundamentally to take no direct part in the fighting.” What object merited such veneration? The bulldozer. And that scribe was hardly its only admirer. Major General Eugene Reybold, who commanded the US Army Corps of Engineers during World War II, reckoned that “[v]ictory seems to favor the side with the greater ability to move dirt.”

The diesel bulldozer has had a remarkable run through the American imagination, as Francesca Russello Ammon—an assistant professor of city and regional planning—documents in her new book, Bulldozer: Demolition and Clearance of the Postwar Landscape. After its heroic turn in the war, the machines became a darling of children’s book authors and illustrators who depicted friendly exchanges between impressed youngsters and the “affable, amiable” civilians who were now operating them. And by the late 1960s, ads were likening these earth-movers, provocatively, to a “lovely little homewrecker” whose users could “hardly keep their hands off her.” A decade later, some of the era’s most prominent artists turned to giant earthworks projects to comment on its role in an endless cycle of destruction and construction.

Ammon offers a close examination of the bulldozer’s significance as a piece of material culture and as a metaphor. She begins with a look at World War II, which was so much of a “dirt-moving war” that the Navy even created its own branch of construction workers: the Seabees, whose motto was “We Build! We Fight!” During that war, more than 325,000 of these men “cleared land and built structures for more than 400 bases, 100 air strips, 235,000 roads, 700 acres of warehouses, housing for 1.5 million men, and storage tanks for 100 million gallons of gasoline.” They also cleared “bomb-damaged cities of rubble, rescued landing craft that were tossed at sea, and even directly unleashed their power upon the enemy.”

After the war, the US “needed to spur consumption so we didn’t return to an economic depression,” Ammon observes. “There was this thinking that cars and appliances and, especially, homes were going to fuel the economy.” So, as America entered an era of paving rural landscapes and clearing urban slums, legislation like the Servicemen’s Readjustment Act of 1944 and the Housing Act of 1949 made sure that the bulldozer was kept busy after it too returned from the war.

Roughly “7.5 million dwelling units were demolished between 1950 and 1980,” Ammon writes of clearances that “reached their zenith in the 1960s, when wrecking crews tore down one out of every seventeen dwelling units nationwide.” Nearly one million families and 100,000 businesses were displaced in the name of urban renewal, while the construction of interstate highways drove additional demolition. In California, “one orange tree fell every fifty-five seconds,” to be replaced by suburban tract housing in the late 1950s. Ammon spoke with Gazette contributor JoAnn Greco about her fascination with the bulldozer and its role in American history.

What sparked your interest in the bulldozer?

I’m interested in how cities are made. We’re used to thinking about the before-and-after of urban renewal, but the bulldozer allows us to think about that middle piece—and how in some cases great aspirations turned into great disappointments. How did people get behind this process which today we see as so misguided? Part of it was an enthusiasm for machines and progress. There’s a swiftness and power there, but the bulldozer is also a really simple machine for people to understand. It pushes things out of the way. And that’s at the root of post-war remaking: the clearing away of what seemed like blank canvases but were of course homes for people or untouched natural landscapes.

Why was this machine—basically a tractor retrofitted with a giant shovel—so adept a tool for war, and how did it change war?

It had been used during the New Deal for road building because it was really nimble. The bulldozer proved a great tool for clearing airfields and roadways and then, of course, for the clearing of debris after the war. It had that defensive piece at the front, and it was versatile. If there was no technology like that to build bases on these islands, it might have been a different war.

What about the bulldozer’s role in urban renewal?

That was very much about a race to clear away, too. So, maybe things wouldn’t have been done as quickly, cheaply, or extensively. The war was key for ramping up manufacturing of the bulldozer. Then, afterwards, there was all this capacity, and people who knew how to use these machines started their own companies to use the skills they had learned.

Why did you select New Haven, Connecticut and Orange County, California to represent parallels in urban and rural land clearance?

New Haven was really important for urban renewal: it received more federal funding per capita than any other city. And its story was known nationally. One of the early things I came upon were those Life photographs of Dick Lee, the mayor, happily demolishing buildings, and [cultivating a reputation] as the clean-up champion. As for Orange County, California is the quintessential example of the land-clearance story. The quick transformation we see in the before-and-after aerial photographs are just so dramatic. I wanted to put all these things together, how the war and urban renewal and the growth of suburbs and highways were all related, and how the bulldozer helps all of them.

How do the artists you discuss, such as Robert Smithson with his earth art and Gordon Matta-Clark, who famously sliced into buildings about to face the wrecking ball, fit into the bulldozer’s narrative?

I was amazed at this story being repeated in the art world, that this machine changed the way these artists thought about what could be their canvas. They both were chopping up the landscape, but with different motivations. Again, there’s lots of parallel stories going on, and they were great bookends for how the bulldozer never stops.