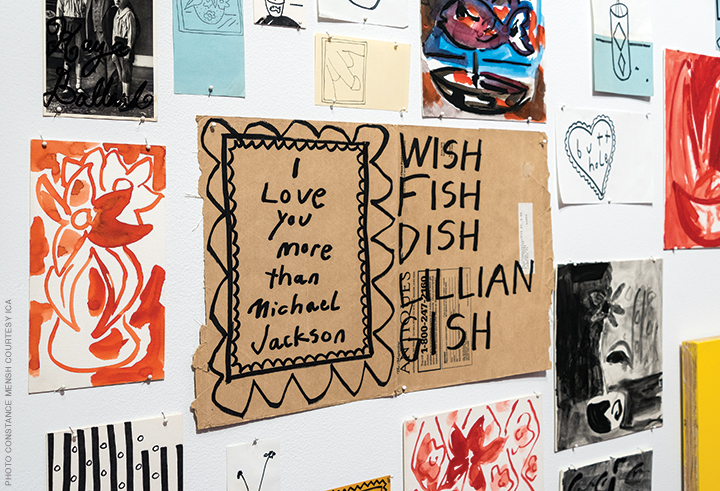 A playfully self-referential “Museum Show” at the ICA.

The text-based artist Cary Leibowitz is unabashedly Jewish, fervently gay, and unflinching in doling out harsh self-assessments—qualities aptly illustrated in Museum Show, a comprehensive survey (organized by the Contemporary Jewish Museum in San Francisco) at the ICA earlier this year. Take a word painting that covered all the bases: “fucked up homo Bar-mitzvah gay boy worries too much about what his mother will wear.”

While such wordy works (scrawled on graph paper, wood panel, or, in this case, a ceramic fish-shaped serving plate) might make some readers uncomfortable, they also suggested a playfully subversive mind at work. The first clue: a determinedly cheery entrance that led visitors to ascend a staircase under a cloud of candy-colored paper parasols inscribed with slogans like Hooray, It’s a beautiful day and you’re here.

“Leibowitz likes things that grab you,” says Anthony Elms, who organized the show for its ICA stint. “Maybe they have a message, or they’re discomfiting, or they’re humorous. The idea is to hit you right away, whether it’s with their scale or their quantity or their color.”

Visitors got all of that, in spades. But closer inspection of the cacophonous jumble of materials, colors, and media—displayed on, against, and amidst walls painted in nursery colors of cotton candy pink and baby blue—revealed the tensions inherent in much of the work. A “wheel of fortune,” for example, was comprised of team pennants that proclaimedMisery Rules and Go Sadness, as well as a standard Business Hours sign in which the opening and closing times were instead occupied by the words Sad and bored.

Leibowitz’ penchant for manipulating such commonplace objects (belt buckles, trash cans, yarmulkes, coffee mugs, teddy bears) and elevating them into art brings to mind Andy Warhol, an influence he has long acknowledged. He’s also adapted that artist’s mix of bemusement—and thumb-nosing—at his fame. “[I’m just] some guy who grew up in the suburbs [and was born] in 1963 and he’s gay and he’s making work and a gallery’s showing him,” he once said.

He’s also characterized himself as possessing the sensibility of an eight-year-old. If parasols and pennants are surely the stuff of childhood, then so are the celebrity headshots that added to this show’s riotous mix. A ’70s-era photo of Elton John in all of his spectacled splendor was inscribed “Fondly, Louise Nevelson,” while an image of 1950s Rat Packers Frank Sinatra, Sammy Davis Jr., and Dean Martin featured the “signatures” of, respectively, Roy Lichtenstein, Andy Warhol, and Jasper Johns above their heads. Less conceptually but more seriously, Leibowitz presented an honor roll of 36 artists and architects by simply proclaiming his “love” (or “luv”) for them in block handwriting on color-saturated 12×16-inch panels. 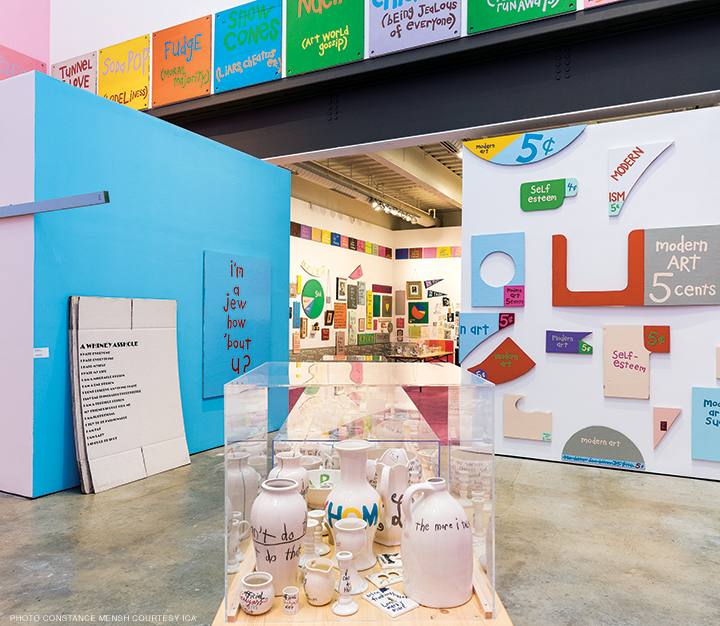 The joyful presence of so much idol worship left the viewer with a sense that Leibowitz isn’t such a troubled grump after all, a conclusion that Elms seconds.

“He obviously mines his gay and Jewish identities for material, but in the great majority of cases it’s to celebrate them or to poke fun at them. And, yes, he is a self-deprecating individual, but that’s along the lines of how anyone might question themselves or doubt whether they’re doing good enough.”

A second, concurrent exhibition, Tag: Proposals on Queer Play and the Ways Forward (which runs through August 12), touches on some of the same themes of identity. A handful of artists in this group show of 21 rely on text, including Cliff Hengst (whose bright posters bear messages like “My Career My Ass” and “Thanks for Nothing Internet”) and Buzz Slutzky, whose “pyrography” (burned-in images and texts on planks of fir and pine) depicts experiences related to growing up Jewish and gay. Others employ costumes and photography to explore the nature of real and assumed selves. Despite its emphasis on “play,” this show is grimmer and more overtly political than the Leibowitz one. Both, though, give new depth and meaning to self-questioning, especially in an age obsessed with surfaces.