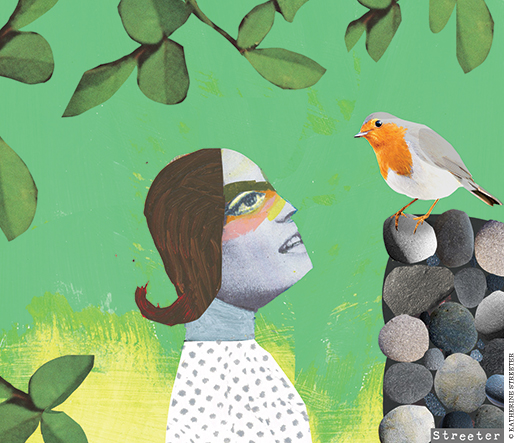 “If the sacred Chalice Well could offer even a hint of healing, I had to get to it.”

By Beebe Bahrami | The scent of sandalwood wafted over our communal breakfast table in Glastonbury, where so many amulets dangled from my neighbor’s neck—Paleolithic mother goddess, Wicca star, hieroglyphics, Celtic knot, crystal rod of amethyst—that it took me a few moments to register her matching tailored dress pants and button-down shirt, both lavender.

The inn’s 14 guests enjoyed custom-cooked English breakfasts—vegan, gluten-free, and Paleo alike—while our hosts, Brian and Clare, came and went from the kitchen with each plate of conscientiously sourced sustenance.

“Your breakfast,” said Brian, setting down my omnivore’s delight, “comes from humanely raised pigs, locally gathered eggs from wide-roaming hens, mushrooms from a local producer, and tomatoes from a neighbor. I apologize,” he grew grim, “that the baked beans come from a can. No one these days can quite get that perfect, viscous gooey goodness as the stuff from the can.”

I was in silent crisis, but still hungry, so I sought comfort in my mushrooms and roasted tomato. I tried to act normal and took a bite. “What brings you to Glastonbury?” I asked the amulet-wearer.

“Ooh,” she exuded, “we come here every year from Swansea. It’s such a cleanse, removing the dark energy of the year. We call it our Glastonbury fix.”

“We look forward to our fix all year,” added her friend, whose lone amulet formed a silver vine holding seven colored stones arranged in the order of the chakras. “We return to recharge our cells on the Goddess. We soak in Glastonbury energy, Glastonbury land, and the Glastonbury Tor and its surrounding marshes.” I squirmed. That’s where things had begun to unravel for me.

I too was having a Glastonbury fix—one for which I had not signed up. My ailment was seemingly physical, not spiritual. But if the sacred Chalice Well could offer even a hint of healing, I had to get to it soon after breakfast, and submit myself to the ways of the Goddess. She, I now understood, was the supreme divinity here. It had been in Her realm that I had fallen into my bad state, and so I hoped that it would be in Her universe that things could be set right again.

This was the endpoint of a hike I had undertaken with my friend Sarah, along the Mary-Michael Line. Our arrival in Glastonbury had been dramatic. We had walked toward the Glastonbury Tor, a stone tower atop a primeval mound, for what seemed like hours. It had been a sunny, mild day. Then, in late afternoon, the very moment we entered the Avalon marshes, the sky darkened dramatically and I saw the first flash of lightning. This realm had been an active human settlement for at least 10,000 years, and possibly more. That the flash seared my vision exactly as we crossed its threshold struck me as remarkable—yet Sarah, often very observant of such things, seemed not to notice.

We walked on. At the first channel of slate blue water and green-yellow reed grasses, two swans swam past beneath the looming Tor, a landscape feature often called the Goddess’ breast, after the curved hill whose tower suggests a nipple nourishing the cosmos with divine energy. We were standing at the Goddess’ front door, where the legendary Arthur had encountered the Lady of the Lake, whose grace would allow passage onward to Avalon. I saw another flash of lightning. I ran to catch up with Sarah.

“Wow! Talk about a dramatic finish!” I exclaimed.

She stopped, looked at me, and glanced up at the sky. “It’s getting dark fast,” she said, “but I doubt it will rain.”

“Didn’t you see the lightning?”

We continued. I kept seeing lightning and she did not. I waited for the telltale answer of rumbling thunder but it never came. I was enchanted, though, to walk across the landscape of the Mists of Avalon, up Wearyall Hill, where Joseph of Arimathea had planted a thorn tree staff that, tradition had it, sprouted into a tree. We descended into town, passing a herd of sheep. Lightning continued to graze my vision, but not Sarah’s.

Over well-earned ciders at the George & Pilgrim’s pub, I noticed that the lightning had followed me indoors. I saw it sometimes when I blinked.

That is when my bowels froze.

Back at the inn, saying nothing, I did some internet research and learned that my experience wasn’t unusual for people over 60. The vitreous humor, that gel-like substance in our eyeballs, begins to shrink and pull away from the retina. This separation usually causes no vision problems beyond occasional flashes and floaters, but the first 24 hours, filled with phantom lightning flashes, can be hairy. Sometimes the process can tear the retina, causing blindness. In such a case, I read, surgery can save one’s vision—but only in those delicate first hours.

I was a long way from an optometrist—and nearly a decade younger than 60. I could either wait it out and hope for the best, or head back to London on a Saturday night and troll for retinal specialists. I decided to stay. By Monday, I reasoned, we’d sort it all out. And maybe on Sunday, here in magical Glastonbury, I’d experience a miracle. The words of a local celebrity and guide rippled through my mind. “People think it’s all about angels and light,” he’d told me about his hometown, “but it’s about going into your shadow and dealing with your shit and coming out with clarity. You gotta deal with your shit.”

Interesting choice of words, clarity and shit, what with my eyes flickering and bowels stalled.

I excused myself from the table and soon made my way to Chalice Well. For the fourth day in a row, a curious absence haunted my walk. I had still yet to see a red throat—a common bird throughout the British Isles and the continent, popularly known as the European robin. They are shy yet friendly, and beautiful. Atop spindly legs, their fat, puffed-out chests bear a heart-shaped russet patch, and above needle-like beaks they have the biggest, most soulful brown eyes. Given their abundance here, not seeing one yet in all the forest and fields we’d traversed was an anomaly.

I’d fallen in love with them some years ago, when visiting the hill above Lascaux cave in southwestern France. There, in a remote vertical cavern, archaeologists found a rare motif: a bird-faced man reclining next to a bison that had been speared in the belly, with its bowels tumbling out. To his other side lay a staff topped with a bird. Perhaps the man was a shaman performing some form of regenerative magic. He also had the face of a bird.

As I had reached the part of the hill atop the famous cave, now closed to visitors, a red throat had careened to the earth, landing two feet before me. He hopped two full circles around me and then stopped and stared. We sat there, nose to beak, for a magical moment. When I stirred, he flew up to a branch but then flew down and landed next to me on a stone. I was entranced. Ever since, I’ve looked for this little bird and know that whenever he appears, magic is abroad.

Within the enclosed gardens of Chalice Well, white tents sheltered healers offering every therapeutic modality within the alternative universe. At the center was a well whose forged cast-iron cover bore the design of the Vesica Pisces, two intersecting circles that form the shape of an eye. I stared at the eye; it stared back. Within were iron-rich, subterranean waters—the blood of the Goddess. I took a drink, hoping for wholeness, hoping for vision. I then wandered alone through the lush gardens, taking in the vivid colors as though they were a final visual feast.

PresentlyI found myself in a secluded nook beneath an oak tree. No one was around. I sat on the cobblestones underfoot, closed my eyes, and unexpectedly began to cry.

I didn’t want to lose my eyesight. I didn’t need a lot of things, but holding on to my ability to see this Earth’s beauty … now that I could lose that gift, I panicked. I made myself take a deep breath and hold it.

And in that moment of stillness, I heard a rustling. Opening my eyes, there before me was red throat. He hopped closer. You know me, I know you do. You’ll be fine. He hopped around me in circles, then came to rest to face me again, and we just sat there. A woman suddenly appeared, “Oh, my, he’s a friendly little one.” Just as suddenly, she disappeared, but the robin stayed for sublime minutes before flying into the oak branches and away.

I relaxed. I thanked him, and the Goddess. I knew I would be fine, probably even better. I had grasped my finite, imperfect existence and the exquisite beauty of being here for so brief a time.

Monday, a retinal specialist in Cornwall declared that everything looked good. “Just don’t knock you head hard,” she advised. By now, I was deep in the crisis of the other end, having been constipated for longer than I cared. “What about straining to go to the bathroom?” I asked anxiously. “Will that make my eye worse?”

She stifled a laugh. “You’ll be fine,” she said, “just don’t hit your head in the effort.” We laughed together. Hard.

All was well: once I learned my sight was sound, all systems came back on line. I’d dealt with my shit. My clarity had sharpened. I understood life’s fragility and beauty more deeply. And everywhere we trekked on the rest of that journey, red throats greeted us. Magic, again, was abroad.

Beebe Bahrami Gr’95, beebebahrami.weebly.com, is the author of Café Oc (Shanti Arts Publishing) and Café Neandertal (Counterpoint Press), due out in winter 2016 and spring 2017, respectively.