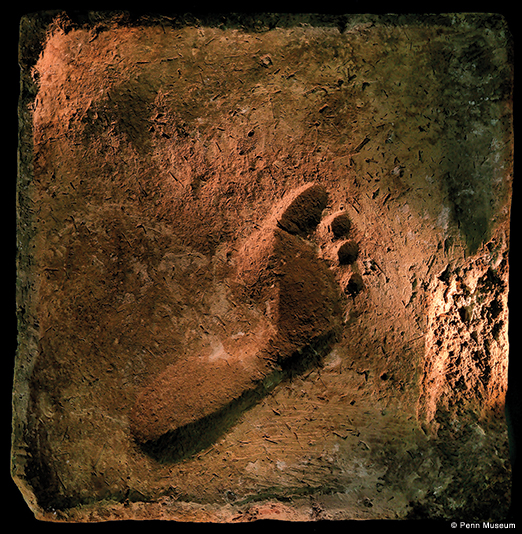 Human footprint left on ancient mudbrick used in construction, Ur.

At the entrance of the Penn Museum’s luminous new Middle East Galleries is a footprint in clay—a reminder, symbolic and literal, of the mark humanity left on the Mesopotamian terrain four millennia ago.

The 6,000-square-foot galleries are filled with archaeological treasures—more than 1,200 artifacts culled from over two dozen of the Museum’s expeditions, including celebrated finds from the royal tombs of Ur, in present-day Iraq.

Subtitled “Journey to the City,” the three-room, long-term exhibition recounts a tale of increasing organizational complexity, as the inhabitants of this mostly arid region learned to irrigate their lands, domesticated crops and animals, developed writing techniques and legal codes, traded with neighboring cultures, refined their craftsmanship, and constructed monumental architecture. 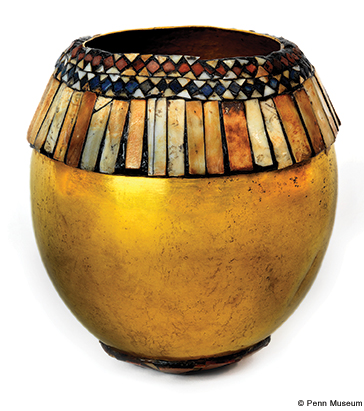 Gold ostrich egg from the Royal Cemetery of Ur.

The storyline shows how “ancient peoples changed their way of life thousands of years ago to stay in the same place all year round”—and how the resulting urbanization speeded innovation, says Penn Museum Williams Director Julian Siggers.

The key message for visitors, says Dan Rahimi, the Museum’s executive director for galleries, is: “Those people in the past aren’t so different from us. People who lived in the cities faced the same challenges that we do today.” 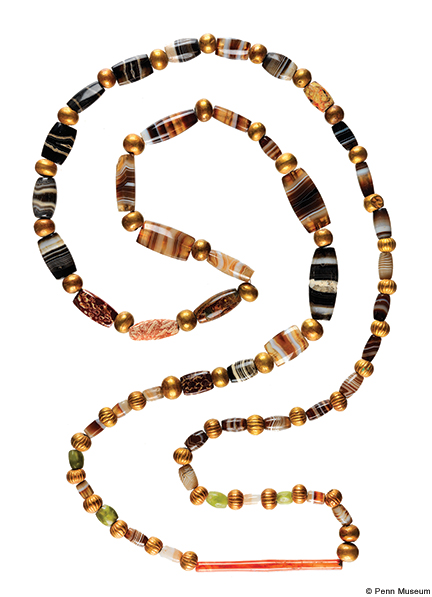 The April opening of the $5 million Middle East Galleries concluded the first stage of an ambitious reimagining and upgrading of the Museum that involves a $102 million capital campaign and the reinstallation of 75 percent of its world-renowned collections. (The lead funders for the Middle East Galleries were the Selz Foundation and the William B. Dietrich Foundation.)

“We hadn’t done a major overhaul of our permanent or signature galleries in decades, so it was just time,” says Steve Tinney, the Museum’s deputy director and the coordinating curator of the new galleries. The overhaul is designed to be “a game changer in the Museum’s international reputation” and “to establish us as a place that, ideally, everyone who comes to Philadelphia to go to museums comes to visit,” he adds. “And that meant starting over—with new standards, new design teams, a new way of doing things.” 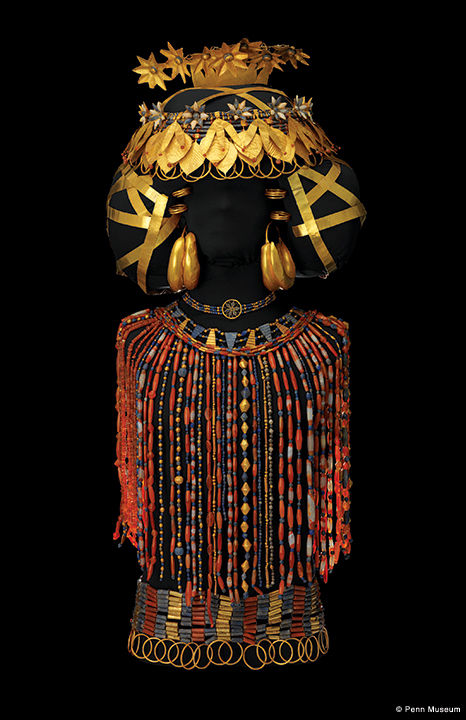 One early step was determining the galleries’ scope. The 10-member curatorial team—plus Rahimi, who coordinated curation and design—decided to exclude collections from the eastern Mediterranean, which will get their own gallery. But the curators opted to extend the narrative through the Islamic period, with displays of the intricate gold ornaments of Scythian nomads as well as illuminated Islamic texts and glazed ceramics from the Ottoman Empire. “It was a big step because we had never done that before,” says Holly Pittman, curator of the Museum’s Near East Section and the Bok Family Professor in the Humanities.

That third gallery also showcases the dramatic destruction and charred artifacts of Hasanlu, in present-day Iran. Perilously situated between the warring empires of Assyria and Urartu, the city was burned to the ground in a single day—it’s not clear by whom—around 800 BCE. When Penn archaeologists excavated the site, between 1956 and 1974, they found evidence that many inhabitants had been murdered.

In contrast to such dark historical episodes,the new galleries are strikingly light and airy. Alisdair Hinshelwood, director of Haley Sharpe Design, says he wanted “to let daylight into the galleries, so that people were aware of the history of the building, and to make people feel comfortable.” But he also wanted to “allow the objects to be the most important part [of the exhibition], and not the design.” Because the color palette of the many clay artifacts—cuneiform tablets and cylinder seals and ceramics—is limited, he says, the design tries “to engage people with the detail and the texture and the carving.”

The chronological narrative is based on “this idea of the journey from the very simple background of village life,” in the first gallery, “all the way to complicated cities,” Hinshelwood says. The show ends with objects and photographs suggesting commonalities between Philadelphia and the first urban centers, linking (for example)the monumental architecture of City Hall across time and space to the famous ziggurat of Ur.

Penn’s archaeological digs enable intimate storytelling about people, places, and objects. One case in the centerpiece Ur gallery features a clay impression of a baby’s footprint, probably made by its mother as a keepsake. In another, a dog’s paw prints appear on a clay brick, from about 2100 BCE, alongside a cuneiform inscription of a king’s name—a chance encounter between the ceremonial and the mundane.

Along with labels, the exhibition uses touchscreen interactives, touchable reproductions, and line drawings, as well as photographs and videos of archaeologists and present-day life in the region. A 3D animation of a flat drawing evokes Ur’s bustling commercial life, fluidly depicting the progress of trade goods down a river, through the city gates, and to the top of the city’s ziggurat. (A companion book is in the works, and trained Global Guides from Iraq and Syria will offer tours connecting past and present.)

About half the objects in the exhibition have not previously been on public view, though the Ur gallery also displays some of the Museum’s most familiar treasures: Queen Puabi’s elaborate ornaments of gold, lapis lazuli, and carnelian; the Ram-in-a-Thicket sculpture, now considered to be a goat nibbling tree leaves; and the bearded bull’s head and inlaid panel from an ancient lyre. One case is filled with precious alabaster vesselsfound in the queen’s tomb, which dates from 2450 BCE, while another contains tumblers and bowls of silver and gold from the same burial.

During the more than three-year planning process, the project team visited a host of other museums for ideas and inspiration.

“One of the takeaways is that there is a place for intensely artistic display of great objects,” says Tinney, who was particularly impressed by the bust of the Egyptian Queen Nefertiti at the Altes Museum in Berlin. In the case of Ur’s masterpieces, he says, the team decided “to isolate these things” and “light them really well.” Some exhibits—including the rearrangement of Queen Puabi’s diadems and the presentation of a warrior’s grave at Ur, with its scattering of grave goods—are based on new research.

Tinney, who directs the Pennsylvania Sumerian Dictionary Project, is especially proud of the thematic displays of ancient writing. “In the first room, we’ve really tied writing to early administration and connected it to the city seals,” he says. “And in the second room, we’ve really tried to think about how we have a collection of school tablets that tell us about the curriculum in Nippur in 1730 BC or so, and how that develops into an intellectual history through literature. And in the third room, we have a business archive, and we have the magic bowls,” which feature incantations in Aramaic.

One immediately compelling artifact is the “First Day of School” tablet, with a single cuneiform wedge repeated over and over again—presumably a child’s rote exercise. The school tablets are juxtaposed with fragments of the Epic of Gilgamesh, Mesopotamia’s crowning literary achievement, and tablets celebrating its kings.

Pittman says there was some curatorial disagreement over whether to exhibit the Museum’s massive reproduction of the Ur-namma Stele, which depicts King Ur-namma’s rebuilding of Ur. It was fashioned for $100,000 in 1994, she explains, because most of the original fragments of flaking laminated limestone, sculpted around 2100 BCE, were too fragile for display.

The reproduction had been on long-term loan to New York’s Metropolitan Museum of Art. “A lot of people didn’t want it. They just didn’t think it was very attractive,” says Pittman, who disagreed, calling it a “great work.” A single fragment from the original is on view in a nearby vitrine.

To avoid overwhelming visitors, curators rigorously shortened texts and pared hundreds of objects from the show.

“We were made to cut,” concedes Tinney. “But we did it with good humor, mostly. We’re entering this with a very visitor-centered approach: This is not for us. This is for the public.” —Julia M. Klein

Arts and Culture
A Century Later, The Sphinx Moves Again