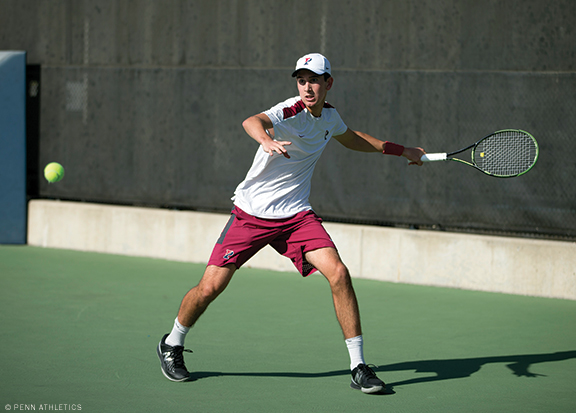 By Dave Zeitlin | Kyle Mautner had been battling the flu all week when he stepped onto a Hamlin Tennis Center court last April for the final men’s tennis match of the 2016 season. And as the contest dragged on, the Quakers’ No. 1 singles player didn’t feel any better. Exhaustion and cramps deepened their grip on the freshman with each point.

So when his opponent’s shot sailed long and the Penn ace prevailed in a final-set tiebreaker, Mautner collapsed onto the court. The next thing he knew, all his teammates were on top of him screaming, reveling in a dramatic 4-3 victory that featured three wins in tiebreakers.

“It was so loud,” Mautner recalls. “It was just an awesome feeling.”

For Penn’s upstart men’s tennis program, ending the season with what veteran head coach David Geatz called the closest match he’d ever seen was certainly thrilling. But the Quakers still finished one game under .500 in the Ivy League—marking their ninth straight season without a league title.

That’s a trend the Quakers are ready to reverse when Ivy play opens in April following a challenging non-conference schedule.

“It’s been far too long,” Mautner says, glancing up at the 2007 Ivy League championship banner that hangs in the indoor Hecht Tennis Center. “I think we’re due.”

Mautner is one of the biggest causes for optimism on that front. Just getting a player of his talent to Penn was a major victory for Geatz, who admits that Penn’s admissions standards have made recruiting more difficult than it was at his previous head coaching stints at the University of Minnesota and the University of New Mexico.

But Geatz, who was hired by Penn in 2011, had the advantage of knowing Mautner, who was part of his junior program at Greenwich Country Club in Connecticut.

After becoming the the top-ranked high school player in Connecticut, Mautner has embraced the academic side of Penn while continuing to improve on the court. During his freshman season, he played as Penn’s No. 1 singles player every match and knocked off several of the NCAA’s top 100 players en route to being named first team All-Ivy.

“He’s ultra-competitive,” Geatz says. “He’s a really, really smart player. Even as a freshman, he played like a 40-year-old guy. He’s got all the shots. He doesn’t just blow you off the court. He’s got every shot and he knows how to use it.”

No. 2 singles player Josh Pompan, a junior, plays with a different style and moves “a little quicker on the court,” Geatz says. But both started the season ranked in the top 100 in the country.

Geatz believes that another standout singles player could be needed to win the Ivy League and is hoping former No. 1 Nicolas Podesta will regain his eligibility after leaving the team two years ago to turn pro. But he loves the 1-2 punch of Mautner and Pompan, and especially the spirit that the latter brings to the team.

“In 30-something years of coaching, Josh is one of the best kids I’ve ever had,” Geatz says. “When you talk to him, you just know. He’s so enthusiastic that at first you think it’s kind of an act. But it’s not an act. It’s just the way he is.”

Pompan credits much of his enthusiasm to Geatz, who makes practices lively with a mix of encouragement and good-natured heckling.

“He’s a legend,” Pompan says. “Literally the reason I came to Penn in the first place is I talked to Coach Geatz. I didn’t visit the school. I committed on the spot after meeting him.”

Senior captain Matt Nardella agrees, calling his coach “the most likable guy in the world.” And that’s helped the program grow over the past few years, as Geatz has brought in new recruits, created a better practice environment, and seriously upgraded the schedule.

The facilities are another reason for the program’s rise. The Hamlin Tennis Center courts, built in 2011, have Penn Park and the city skyline as a backdrop. “You step foot out there, you can’t not want to play tennis,” Nardella says. And the indoor courts were resurfaced and the locker room renovated in the past three years.

Geatz has faced challenges and setbacks trying to put his own stamp on the program. But after coaching college tennis since the early 1980s at different stops around the country, he’s found a home in Philly.

“It’s the toughest job, but also my favorite,” he says. “I like Penn. I like the city. The kids in the school and the quality of the kids you get on your team—I think they’re great kids.”

A Decade of Dominance

During the first team workout of the 2007 season, Penn women’s lacrosse captain Chrissy Muller C’07 GEd’09 reminded her teammates what they were working toward. “This is where we want to be in May,” she said, looking around at a near-empty Franklin Field. “The Final Four.”

The goal may have seemed overly ambitious at the time. The program hadn’t even qualified for the NCAA Tournament since 1984. But the 2007 Quakers indeed made a stirring run to the Final Four, which was held in front of nearly 10,000 fans at Franklin Field that year. Even more remarkably, that performance sparked an incredible decade-long period of dominance as the Quakers made it back to the Final Four the following two years and have qualified for every NCAA Tournament since.

And in recognition of the 10-year anniversary of the group that got it all started, the Quakers will honor the 2007 team this season, with several activities planned around their March 18 game versus Duke.

“That was the beginning,” says Melissa Lehman C’08, a former player and current assistant coach. “What we did then is still in place today—the expectations and the standards and the goals that this program still has.”

A junior on the 2007 team, Lehman vividly remembers the goosebumps she felt while standing on her home field as the national anthem played, with so many more fans than usual in attendance. And she remembers how much it meant for the team to return to the Final Four the following year, her senior season, and take it a step further by advancing to the national championship game, proving that the 2007 season “wasn’t a fluke” and that “Penn deserved to be there.”

That her college career ended with a loss in the national championship was heartbreaking but has also served as motivation as the University’s most successful sports program continues to chase an NCAA title on top of the nine Ivy titles they’ve won in the last 10 years.

Could this be the year they return to the Final Four and chase a national crown?

“That would be amazing, 10 years from our first Final Four,” says Lehman, who’s been an assistant under head coach Karin Corbett since 2009. “That’s the goal.” 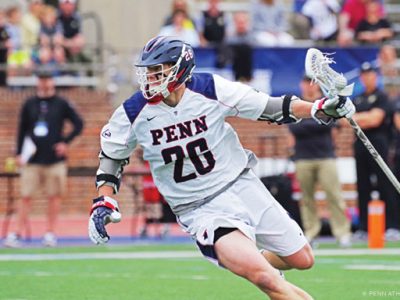