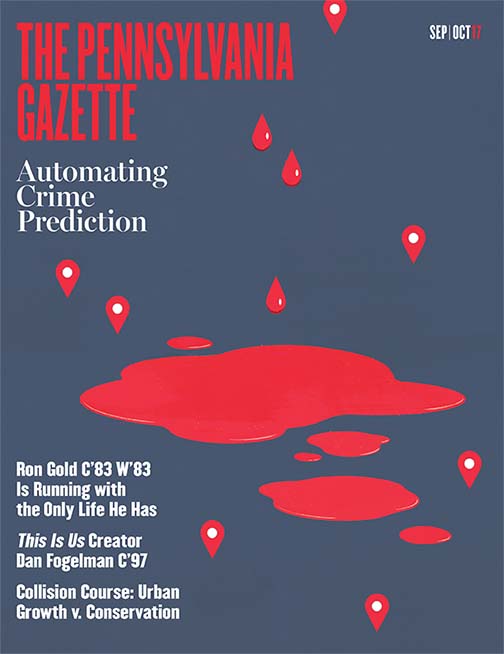 Black Box Justice | Richard Berk designs computer algorithms that predict crime. As courts and cops increasingly use his and similar tools to shape everything from parole decisions to street policing, Berk has a warning: accuracy comes at the cost of fairness, and citizens must decide where justice lies. By Trey Popp

Ron Gold’s Second Act | After an accident left him paralyzed from the waist down, Ron Gold C’83 W’83 struggled to come to terms with the “different hand of cards” he’d been dealt. But with the help of his wife and family—and some Penn friends—he’s managed to regain his zest for life and launch a new business to help others in his situation. By Dave Zeitlin

This Is Us Is His | Long before he created last season’s top-rated new TV show, Dan Fogelman C’97 got his start listening to his Penn housemates’ stories and making them laugh with his. By Alyson Krueger

From the Editor | Code and punishment, story of resilience, a good cry.

Notes from the Undergrad | A relationship beyond words.

Expert Opinion | What’s in a U?

Bioethics | What does it mean to be human, really?

Sports | Football looks to take it all, all by itself; Reina’s wrestling return.

Books | A producer’s memoir of making The Elephant Man.

Online Poetry | ModPo is not your typical MOOC.

Ashley Parker C’05 is on the White House beat.