“Save a Life, Serve a Cause, Seek the Sublime” 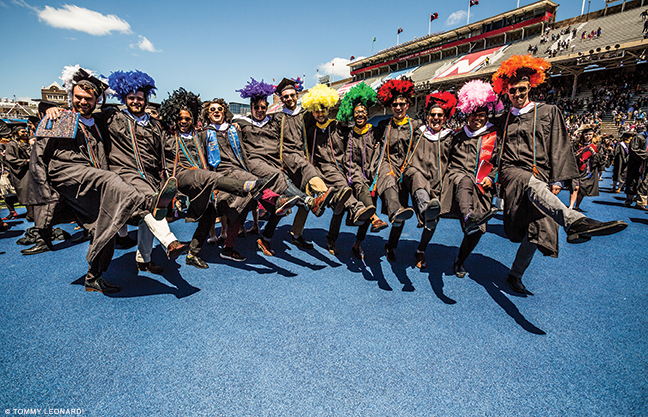 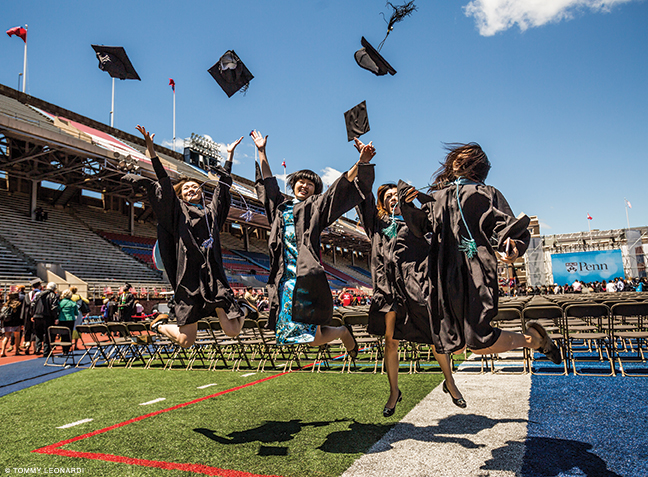 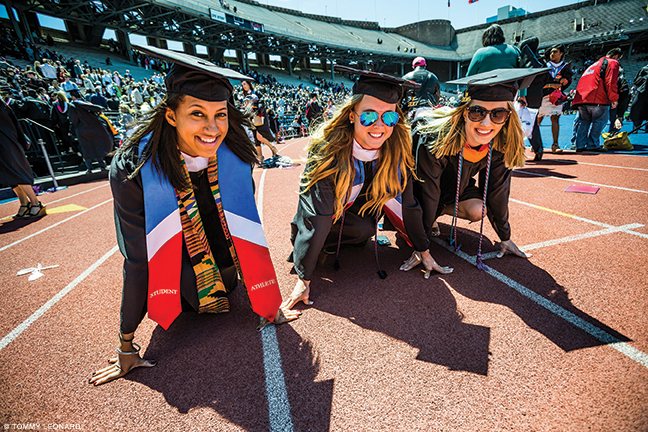 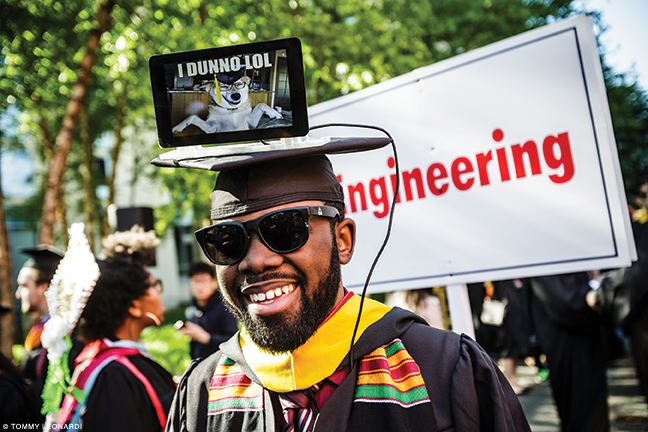 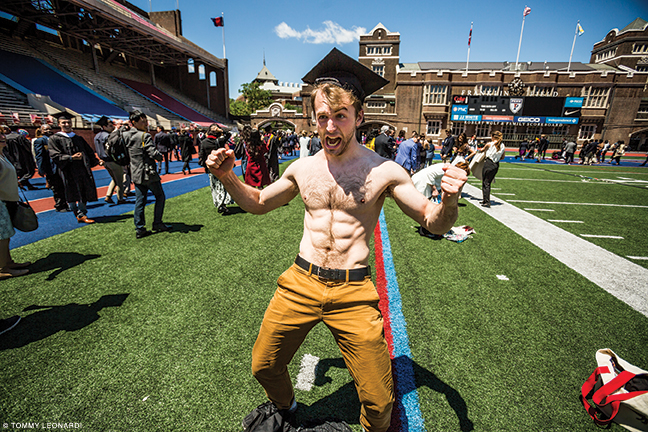 After a soggy Alumni Weekend, Mother Nature dried out Franklin Field with 73 degrees of sunshine and wind that whipped the Class of 2017’s tassels to and fro during Penn’s 261st Commencement.

As nearly 6,000 students walked, danced, and skipped down Locust Walk to tunes performed by the red-sweatered Penn Band, their exhilaration was palpable. “So much is happening,” exclaimed one student to her friend. “I just want to take it all in, but I don’t know how!”

Indeed, it was a day for smiles, hugs, joyful tears—and big questions.

Looking stylish in her very necessary sunglasses, Penn President Amy Gutmann smiled wryly as she looked out onto a sea of robes and mortarboards. “Graduates, your success, which we celebrate today, is all about the choices you have made to get here,” she said. “You are so very good at choosing.” As a playful demonstration, she presented them with a few questions: Magic Carpet Foods or Lyn’s food truck? Instagram or Snapchat? Cheers erupted from the field and stands alike. “These are graduates who know their minds,” she concluded, nodding.

But Gutmann’s exercise in choice had a larger meaning. Following an academic year marked by political unease, she urged the Class of 2017 to demonstrate their talent for choosing by living meaningful lives.

“Choice is essential to freedom,” Gutmann said, “and freedom is essential to choice. By that measure, Penn graduates today have enormous freedom, more so than almost anyone who has gone before. Yet, the challenge of living the most meaningful life possible remains. What do we choose? The answer lies not in what you have with your freedom but in what you do with it. How will you use the amazing freedom of choice that is yours?”

Gutmann invoked the story of her parents. As a young man, her father fled Nazi Germany in 1934, first to Bombay, India; then, after World War II, he brought his entire family to the United States, where he met Gutmann’s mother. “[My parents’] freedom of choice was radically constrained compared to yours and mine,” she said. “Nonetheless, they chose to live inspiring and satisfying lives by making incredibly meaningful use of the freedom that they did have.”

The most impassioned lives, Gutmann proposed, follow a similar path: “save a life, serve a cause, seek the sublime.”

Penn Provost Vincent Price—in his last appearance at a Penn Commencement before he steps down to become president of Duke University—welcomed Booker to the podium. “Honoring someone is not just about venerating them; it is about learning from them,” said Price. “We can all learn a lot from Cory Booker.”

Price continued, “In his pocket, Cory Booker carries an African proverb: if you want to go fast, go alone; if you want to go far, go together. Graduates, as you prepare to leave Penn, I urge you to consider two things: not how fast you want to go but how far. And not the lines on your resume but the spaces between them. In five years, or 10, or more, what will we learn from you?”

Booker began with the story of Gandhi’s shoes. One day, as Mohandas Gandhi was boarding a train, a sandal slipped off his foot and onto the tracks, becoming irretrievable as the train was moving. To the amazement of everyone around, Gandhi calmly removed his other sandal and threw it close to the fallen one. When the people asked him why, he responded that whoever found his other sandal would now have a pair he could use.

To illustrate how he still struggles with generosity of heart, Booker recounted a recent experience of sharing food—McDonald’s fries, to be precise—with a man who was hungry. Booker felt good about his actions, until the man admitted he could also use a pair of socks. Booker sheepishly replied, “I’m sorry, I don’t have any spare socks with me.” Just then, a friend who was with him reached down, took off his own socks, and handed them to the man. “I sat back and I realized I have so many socks at home that I don’t even wear,” Booker told the crowd, “but I was not living with that moral imagination, that creative compassion.”

He continued, “We have such power that we do not use. As we go about our big challenges, our big goals, our desires to make big differences, we forget the power we have right now. We have a choice in every moment … and the choice that we often fail to make is to accept things as they are or take responsibility for changing them. And no, you may not be able to end homelessness or hunger, but we can never allow our inability to do everything to undermine our determination to do something.

“Our real power is not necessarily to change the world,” Booker said, “but to make a world of change for the people we encounter every day—a smile, creativity in a kind word, finding a way to throw a sandal onto the track.” —NP

Cory A. Booker | Doctor of Laws and 2017 Commencement Speaker