Old Penn and After

Every so often, for one reason or another, I have occasion to look through old issues of the Gazette and its predecessor, Old Penn.  I’m always fascinated, for reasons both contradictory and complementary.  On the one hand, there is the distance from the present moment that comes with a publication that’s been around for more than a hundred years (“Wow, the freshman and sophomore classes used to fight to steal each other’s pants! And there was a big event called University Day that celebrated George Washington’s birthday every year!”).  On the other, a powerful sense of continuity (“Hey, there’s Franklin Field!  And the Quad! And the Penn Museum is digging up something amazing in some faraway land!”) On top of those, there is the experience of witnessing the major disruptions and developments of the 20th century—the Great Depression, both world wars, the wild package of political-social-cultural upheavals wrapped up in “the Sixties,” and more—played out here on campus.  For me, the combination is unfailingly compelling, and therefore a major time-suck.

So why not turn it into an assignment?

Back in 2002-2003, when we celebrated the magazine’s centennial, we devoted big chunks of six issues to a consideration of Penn’s history as reported in our pages, but of course there was a lot we had to leave out.  One of these days, maybe we will be able to digitize all the issues, so readers can have every detail available (and without having to inhale all that decaying paper dust!).

In the meantime, though, I’ve decided to take advantage of our new blogs and otherwise-expanding online presence to try to highlight some events from each volume, starting with our first one, 1902-1903, and catching up with the present in time for the magazine’s 110th anniversary in 2012-2013.

That’s the idea, anyway.  We’ll see how it works out—for decades, we came out weekly, so there are a lot of pages to turn.  The first installment follows.

In the beginning, there was Old Penn, an 8-page newspaper created to “supply a pressing need at the University of Pennsylvania, viz., a weekly periodical which will not only give a complete review of the happenings of the week immediately preceding the day of publication, but also a chronicle of events to take place during the week following, besides devoting some space each week to events and series of events to happen some time in the future.”

Olde Penn made its debut on November 14, 1902, and the first issue featured a front page photo of Houston Hall, where, for an annual membership fee of $3,  any undergraduate could avail himself of facilities including “a large central hallway, reading rooms, billiard and pool tables, tables for chess and checkers, gymnasium, a bath room, including shower and needle baths and a swimming pool; athletic trophy rooms, restaurant, barber shop, a large auditorium with grand organ, rooms for University papers and other organizations, a dark room for amateur photographers, etc.”

Houston Hall was more or less ground zero for the emergence of a new type of collegian at Penn, trumpeted in an accompanying article:

“The ancient idea, that the book worm is the highest product of scholastic or University training, had been displaced by the realization that the man best equipped for the conflict with modern world conditions, and most apt to be a credit and benefit to his Alma Mater, is the one whose development is many sided, if not entirely perfect.  To this end such institutions as the Houston Club contribute, if properly guarded and guided.” 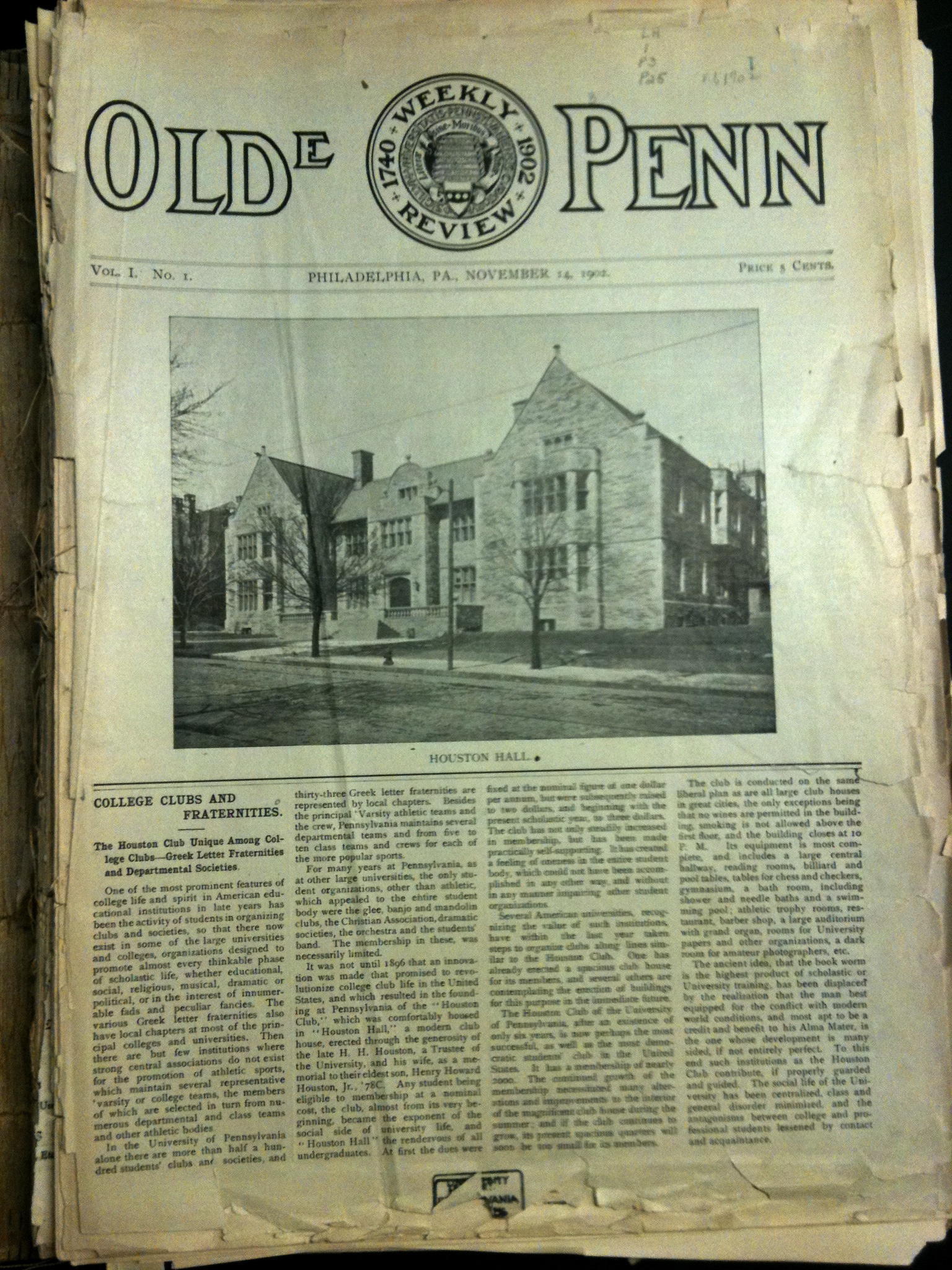 An editorial on social life at the University (“occasions upon which men may forget to talk shop for a few hours—may neglect for a while the doubtful authorship of an Elizabethan drama, or the existence of a fourth dimension”) listed a full slate of activities, from the “very successful” Houston Club Dance to “periodical smokers and annual banquets” and “dinners given by various fraternities, faculty teas, class balls and dances, concerts by the Band, Orchestra, Glee, Banjo and Mandolin Clubs.”

The debate club came in for major coverage, with several long articles and front-page photos of Penn’s team.  (After beating Michigan, Columbia, and Cornell earlier in the year, they lost to a UVA squad, going down in defense of the position that employers “are justified in refusing to make agreements with labor unions, of which a majority of their employees are members.”) 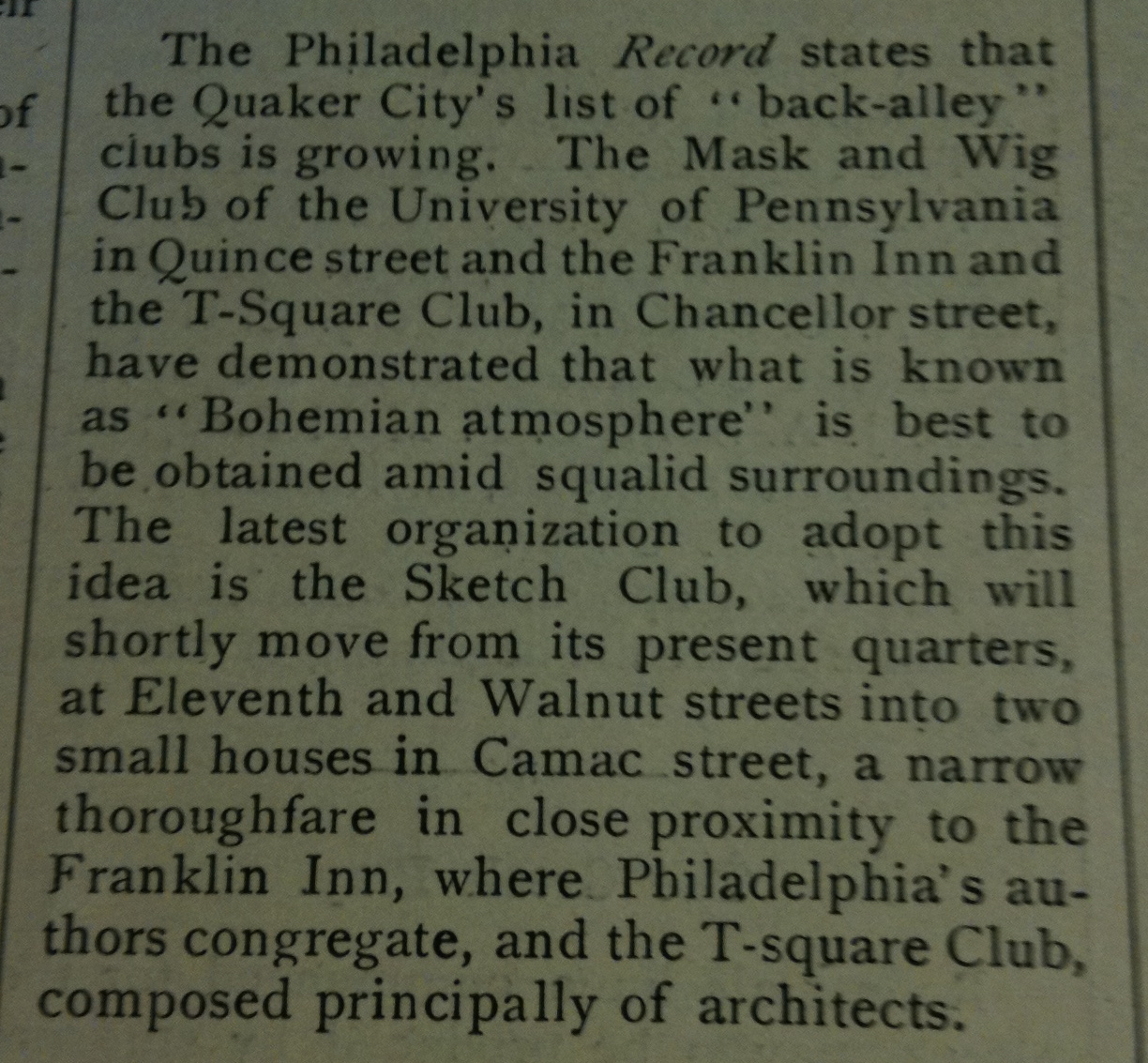 Mask & Wig’s production of “Mr. Robinson Crusoe” was called an “unqualified success,” and the group itself praised for “the hard work and the long task learned with so much zeal and so light a heart.”  A small item highlighted the group’s clubhouse—which remains active to this day—for its “Bohemian atmosphere.”

Several articles featured the production, staged by students and faculty in the classics department, of Euripides’ “Iphegenia Among the Taurians.” 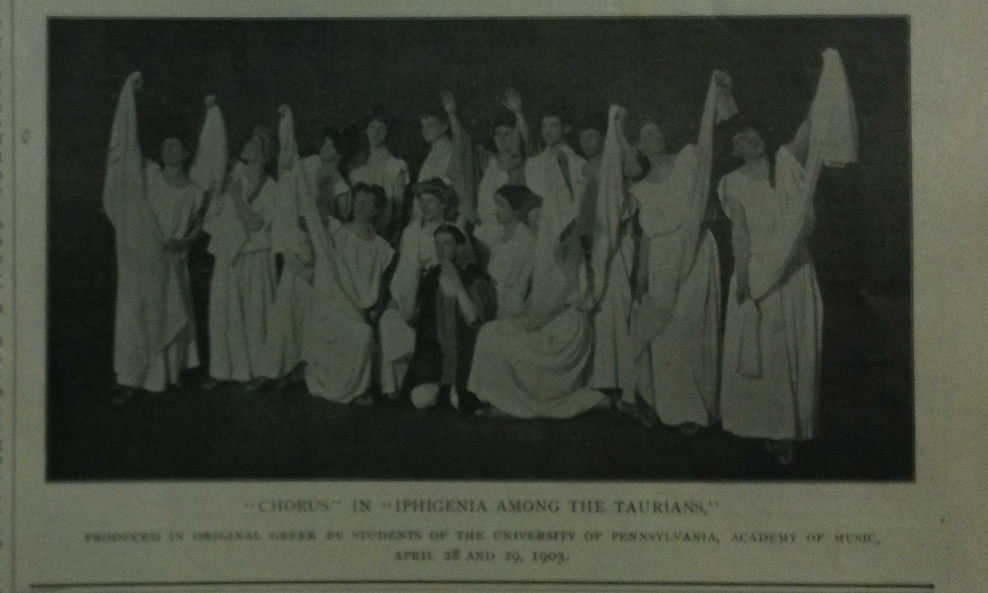 It was performed—in Ancient Greek—at the Academy of Music and proclaimed a “signal success” that placed the production “Permanently Among the Prominent Productions of Ancient Greek Dramatic Art in America.”  (Among the chorus, incidentally, was one “E.W.L. Pound,” better known as Ezra, who would be heard from again.)

Also making news was the University’s excavations in Nippur, led by Hermann V. Hilprecht, who that year was appointed to a new Chair of Assyriology.  Though he would turn out to be a bit of a charlatan, you would not know that from Old Penn’s effusive description of him as “a man learned yet wise, patient yet enthusiastic, filled with faith yet with a sure grasp upon the tangible” or its tone of offense when Hilprecht was challenged by a German archaeologist, “Prof. Delitzsch,” who denied he was engaged for 14 years in excavations at Nippur and also expressed “radical opposition to the historical accuracy of the Old Testament.”  (According to an earlier article on the excavations, the discoveries made had “pushed back the beginning of history several thousand years” from 4000 B.C when the creation had been previously “reckoned.”)  Delitzsch’s accusations led to Hilprecht being called before Kaiser Wilhelm to “defend the authenticity of the scriptures.” 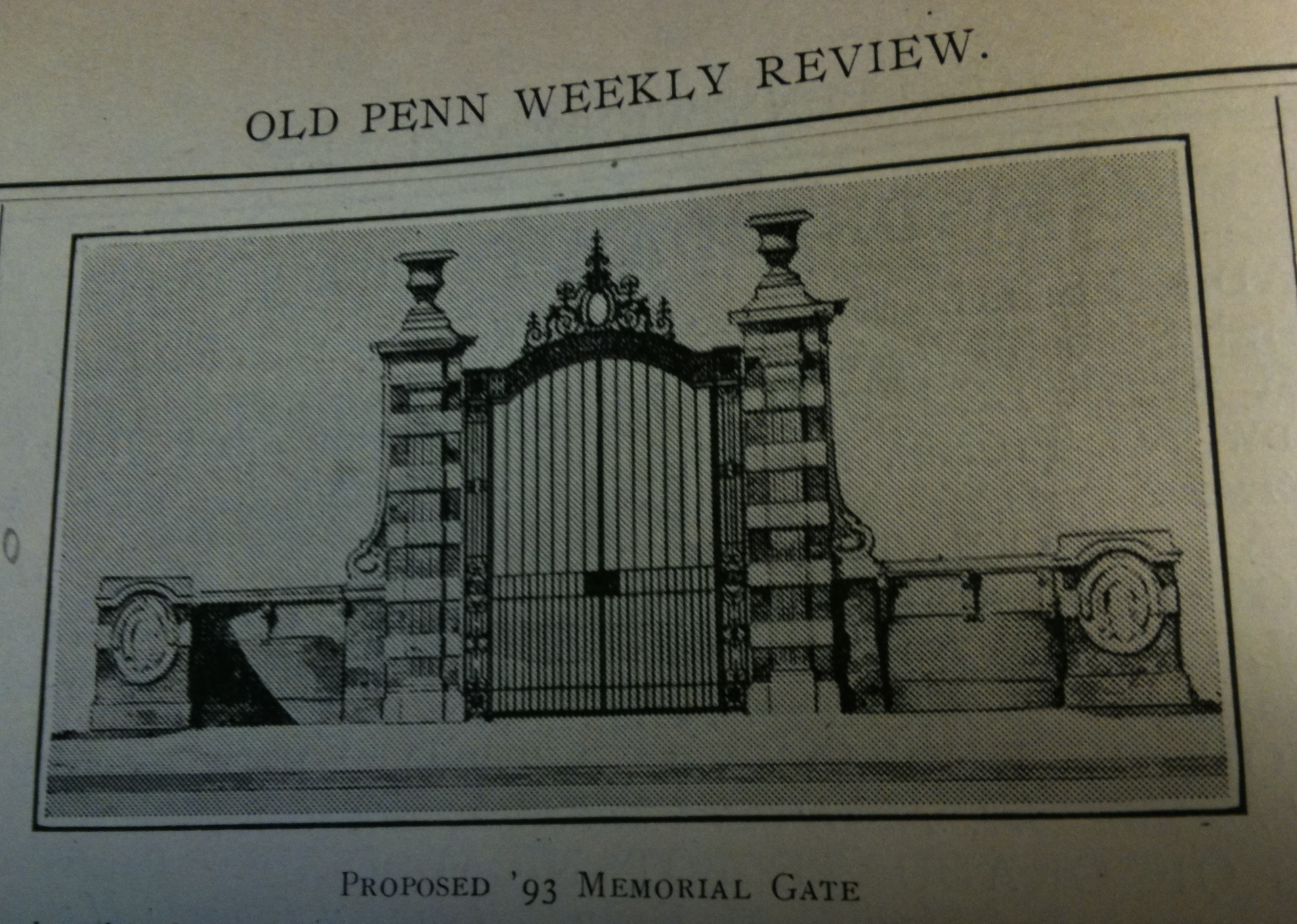 The University was in the throes of physical expansion.  Besides the first issue article on still new Houston Hall, completed in 1896, other issues covered plans for a new gymnasium (“commodious” and “equipped with every modern applicance”) and the new engineering building (“another important step towards the fulfillment of a general scheme which is rapidly giving the University of Pennsylvania the most complete and efficient group of buildings devoted to education in this country”), detailed the progress of the quadrangle dormitories (“one of the most successful of the recently established dormitory systems”), and reported that the Class of 1893 was donating a new gate, costing $2,500 and made of wrought iron with pillars of brick and terra cotta, “to be placed at the entrance to campus on Spruce Street below 36th.”

In his address at Commencement, Penn Provost Charles Custis Harrison captured the note of swift progress (while also putting out an appeal for stepped-up giving from alumni to match): “We passed, some years ago, the day of small things, we have now entered the years of larger measures, and we must look forward in the coming years, under whatever administration, to very much greater work than has ever here been undertaken.”