‘No better gym than a sold-out Palestra’ 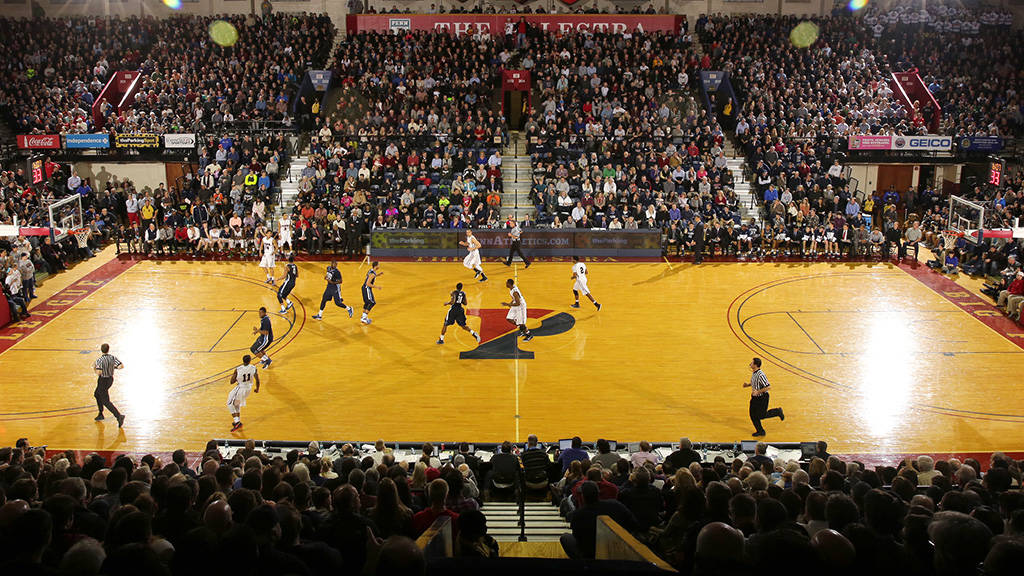 Antonio Woods knew exactly where to look just before Saturday’s game against Villanova tipped off.

Until then, the Penn freshman had only played in four games at the Palestra – none of which were against particularly appealing opponents and caused fans to fill the building to the rafters. But with the fifth-ranked team in the country coming to the historic gym on 33rd Street for a Big 5 showdown, Woods kept hearing all week about the game being sold out.

So he glanced to the corners to see if it was true.

“Coming in, everyone just talked about a sold-out Palestra,” Woods said. “I didn’t realize until I stepped on the floor and saw everyone in the corners. That’s what they like to say – when everyone fills the corners, that’s how you know it’s sold out. It’s a great environment to play in.”

“The corners,” as people indeed like to say, certainly were filled. So was every other section on the old gym. And Woods, who didn’t look at all like he was playing his first-ever Big 5 game inside the Palestra, made many all of them go nuts when he buried a corner three to tie the game at 19-19 in the first half.

And the freshman then did it twice more by hitting a pair of clutch threes in the second half, drawing the Quakers within a point with each one.

Villanova fended off what would have been a historic upset – Penn’s only wins over Top 5 teams came against North Carolina in the 1979 NCAA tournament and against USC in the 1971-72 regular season – by dominating down the stretch to close out its non-conference slate unbeaten.

But afterwards, Villanova head coach Jay Wright admitted his Final Four-caliber team got a serious scare from the Ivy Leaguers – and pointed to Penn’s home gym as perhaps one reason why.

“There’s a distinct roar here when the underdog either ties it or takes the lead,” Wright said. “I don’t know if I can explain it but if I hear it, I know it. I didn’t have to look at what the scoreboard was. It was that three in the corner. You don’t want to hear that when you’re the visitor.”

Sadly, there haven’t been as many Palestra roars as there used to be. For one, there are hardly any Big 5 games anymore in the gym that used to host all of them (even though Philly’s coaches love to say how they want to bring city contests back there). And the home team hasn’t exactly given fans much to cheer about as the Quakers have lost 12 straight to Villanova as well as 11 straight Big 5 games overall.

Since Jerome Allen took over as coach, Penn is 2-20 against city rivals Temple, La Salle, Villanova and Saint Joseph’s – a tough blow for an ultra-competitive guy who had some nice wins over those teams back in his playing days.

Villanova, meanwhile, has emerged as the class of the city with 11 straight Big 5 wins, which Allen admitted “stings a little bit.”

“The entire city has fared well over the past couple of years in terms of the national spotlight,” he said. “I think we’ll continue to plug away to get better and improve so that we as the University of Pennsylvania are not sitting here talking about another team dominating the city. That’s something we won’t stand for.”

If anything, Saturday’s game was a reminder that the fans will still pack the building even as Penn’s struggles persist and that a full Palestra can still create a little bit of magic (had the Quakers played better over the last 10 minutes, they would have been in line for arguably the most unlikely upset in program history).

The key now is to make sure the gym stays loud, the corner remains full and Penn becomes more than just an also-ran in a city that lives and breathes college basketball.

“It’s awesome,” Allen said of the sold-out gym and the packed student section. “I was complaining today about the number of ticket requests I was getting at the last minute. But, at the end of the day, I was smiling. I always tell these guys I’m jealous of them. They have an unbelievable opportunity in front of them.

“To me, there’s no better gym to be in than a sold-out Palestra.”