Music in the Key of Green 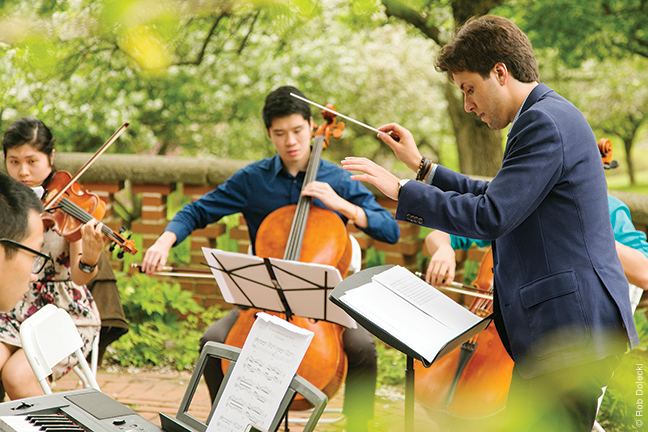 On a mild afternoon in early May, Nicholas Escobar (then still a College senior) conducted nine other Penn students as they performed his music for strings and keyboard at the Morris Arboretum. The eight-part Morris Arboretum Suite, which he composed two years ago, was chosen for the opening of Time in the Garden, the Arboretum’s new multimedia exhibition. (Among the other offerings are oil paintings by Deirdre Murphy GFA’00, an adjunct professor at PennDesign [“Arts,” Sep|Oct 2014].)

The Morris Arboretum Suite can be heard on the Arboretum’s cell phone tour or on its website, by navigating to bit.ly/2FVLqCM. Each part expresses the sensations Escobar felt while visiting different parts of the Arboretum. “You can think of each song like a geotag,” he noted.

“Part III—The Wetlands,” for example, features the melodic chirping of a song sparrow transposed to piano, while the majestic, contemplative “Part VIII—The Seven Arches” represents the Arboretum as a whole. “Part IX—The Rose Garden,” was written shortly before the day’s event, as a celebration of Escobar’s four years at Penn. As the last note sounded, he admitted: “It’s a bit bittersweet.”—NP