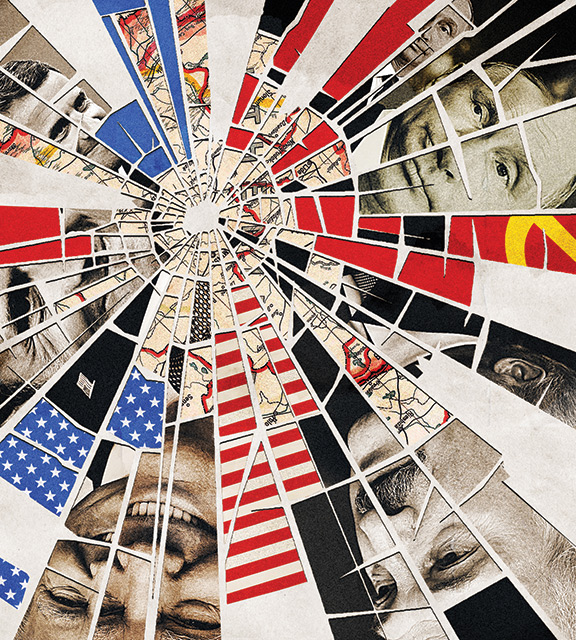 What countries like Belarus and Moldova can teach us about the future of Western politics.
By Mitchell Orenstein

In March 2016, Belarus’s dictator, President Aleksandr Lukashenko, addressed the geopolitical forces dividing his country. “If the partners which we’re in dialogue with try to insist that we have to choose between Russia, Poland, or the EU, we don’t want to be put in this position,” he said. At that moment, Belarus, closely aligned with Moscow, was in talks with the Washington, DC–based International Monetary Fund for a $3 billion loan to bolster its currency reserves in exchange for implementing a raft of liberal economic reforms.

Lukashenko, frequently demonized in the West, has become a virtuoso at managing his country’s reliance on Moscow while tacking to the West when needed. Belarus defers to Russia when necessary. For instance, Lukashenko chose not to sign a deep and comprehensive free trade agreement (DCFTA) with the EU when it became clear that this would incur sanctions from Russia. However, when Russia tries to force Lukashenko to take actions that would compromise Belarusian sovereignty or independence, for instance to sell a strategic enterprise to a Russian oligarch or to host a permanent Russian military base, he leans toward Brussels and Washington. Lukashenko will make an agreement with Western institutions that angers Moscow, demonstrates his independence, and puts money in the state coffers. In the words of one analyst, “Rejection, resistance, oscillation and ‘non-commitment’ have defined Lukashenko’s regime.” While remaining primarily reliant on Russia, Lukashenko takes every opportunity he gets to remind Russia that he is not a lapdog and to rehabilitate himself in Western eyes. This has become more important now that Moscow has begun to talk about annexing Belarus.

Lukashenko embodies the political paradoxes that haunt the lands in between Russia and the West. Caught between two powerful neighbors pulling in different directions, politics in these countries have become sharply, intensely polarized. Some talk of a “civilizational choice” between East and West: a battle between a world of Orthodox, post-Soviet fellowship and an EU-aligned future of liberal democracy. People and political parties are sharply divided into pro-European and pro-Russian camps. Each watches its own television stations, lives in its own media and information bubbles, and feels threatened by the other. Some live, work, and study abroad in Europe; others in Russia. It often seems that two different civilizations exist in the same place. No wonder that some scholars have called Eastern Europe the “shatterzone of empires.”

Yet the paradox is this. While political parties and public media fight a pitched battle for the hearts and minds of the population, seeking to drag their country to the East or West, things look different at the pinnacle of power. There, many of the key power brokers share one important characteristic: an ability to profit from both sides—and from the conflict that divides them.

In some cases, these power brokers are presidents, who may align primarily with Russia or the West, but are always careful to hedge bets and maintain room to maneuver. In other cases, these power brokers are not presidents but oligarchs, leading business people with substantial political influence. For instance, Ukrainian oligarchs have proven enormously flexible, enriching themselves under the pro-Russian Yanukovych regime before switching their support to the pro-Western Poroshenko regime. Oligarch Victor Pinchuk is famous for having opposed NATO membership for Ukraine before supporting it when a new regime came to power in Kiev. He was also a close associate of the Clintons who later switched allegiances and donated to Donald Trump W’68’s election campaign. He is a man who knows how to stay close to power. Moldova’s Vlad Plahotniuc has maneuvered himself into the leadership of his country’s governing pro-EU alliance while profiting from rebroadcasting the main Russian TV stations and their political propaganda. The paradoxes are endless and hard to comprehend.

Yet there is a simple explanation. In countries where mass politics is extremely polarized between pro-EU or pro-Russia positions, the greatest power and wealth flows not to ideological partisans, whose gains are often partial and transient, but to the power brokers who position themselves to profit from the enormous passions and insecurities of both sides. In a war such as this, there is always a catch-22—and a Milo Minderbinder armed with greed, instincts of self-preservation, and flexibility who deftly manages to transcend it.

This dynamic is most visible in the vulnerable states caught up in a geopolitical struggle between West and East. However, the same type of politics is becoming increasingly important in the West as well. As Russia wages a new kind of hybrid war against Western adversaries—a destabilization campaign marked by computer hacking, media manipulation, covert funding for extremist political parties, and the weaponization of business entanglements—their politics become more vulnerable, and the lessons of the lands in between become more relevant. These countries are often seen as poor, backward states. But on this dimension, their greater vulnerability to Russian influence puts them ahead. They are the canaries in the coal mine and have much to teach us.

As in post-Soviet eastern Europe, Russian intervention has become a key issue in democratic elections in the West. A discourse about “civilizational choice” is growing in the West. In 2018, French President Emmanuel Macron spoke of a “European civil war” between forces of liberal democracy and authoritarian nationalism. Echoing these sentiments, outgoing US National Security Advisor H. R. McMaster gave a parting warning about Russia in 2018 when he said that the West is “engaged in a fundamental contest between our free and open societies and closed and repressive systems,” and that “revisionist and repressive powers are attempting to undermine our values, our institutions, and our way of life.” He also claimed that the United States had failed to be tough enough in addressing these challenges. What are these statements if not an articulation of a civilizational choice facing Western democracies—as the lands in between faced years before?

Indeed, Western politics at each election seems to be posed with a choice between authoritarianism and democracy, between free markets and crony capitalism, between the quest for truth and reliance on propaganda. In most Western countries, political parties now divide sharply along these lines, with distinct views on both sides of whether the West should continue to support the liberal international system or a new system based on great-power politics, allegiance to prominent power brokers, and nationalism.

Meanwhile, Russia’s attempts to gain leverage over foreign leaders have become more ambitious. A key example is President Trump, whose properties relied heavily on Russian money, often purchased through shell companies, and whose campaign benefited from Russian support, including the purchase of Facebook ads. In exchange, he has campaigned for an end to sanctions, tried to get Russia reinstated to the G7, and sought to develop business opportunities in Moscow. These efforts should be seen as an attempt to cooperate with Russia for mutual economic benefit, with corrupt rents accruing to the ruling family—a familiar pattern that Russia cultivated, for instance, with Silvio Berlusconi of Italy and many business leaders in Europe. Were Trump not constrained by Congress, which has acted to prevent him from removing sanctions, he would most likely pursue this role as a broker between Russian and US business interests, with his family as the key beneficiaries.

These and other signs indicate that politics in core Europe and the United States increasingly reflect the pathologies of politics in the lands in between. The experiences of countries like Belarus and Moldova contain critical lessons for the West—and a warning about the costs of complacency.

The good news is that Western countries, after being blindsided by Russia’s assault on their institutions, have begun to fight back. The United States and the EU imposed damaging economic sanctions on Russia after 2014—sanctions Russia is desperate to remove. Intelligence services and law enforcement agencies have begun to investigate and monitor Russian subversion of elections. The EU launched a counterpropaganda agency to debunk Russian propaganda and fake news. Macron, after his election, called the Russian president out directly, in person, for attacking him through Russia’s propaganda networks and hacking operations. So, despite some tough challenges, there have been responses. But will this be enough? Or is it too little too late?

While there is much reason to despair, it is critical to recognize that Russia’s strategy of division thrives by encouraging inaction in the West. With even modest action, the West can confront these challenges effectively by, for instance, mounting a determined campaign to counter disinformation, securing our electoral process, policing money laundering more effectively, and responding quickly to Russia’s efforts to disrupt Western institutions. The price of failure is all too evident. We can see it in the lands in between, whose dystopia of division and corruption points to one possible future awaiting us.

Mitchell Orenstein is a professor of Russian and East European studies, and a senior fellow of the Foreign Policy Research Institute’s Eurasia Program. This essay is adapted from The Lands in Between: Russia vs. the West and the New Politics of Hybrid War by Mitchell Orenstein. Copyright © 2019 by Mitchell Orenstein and published by Oxford University Press. All rights reserved.