How did Jay Matsueda W’95 scrape together studio time with some of L.A.’s finest session musicians? “Barter, and the underground economy,” he says. 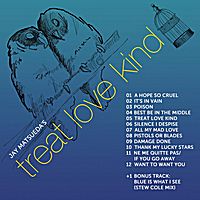 A longtime songwriter, he’d also started out as a photographer (and even used to shoot for the Daily Pennsylvanian back in his Penn days).  After moving to L.A. he got a “regular” job, but kept taking pictures on the side.  “I was mainly shooting photos in small jazz clubs,” he says, and since he didn’t need to turn a profit he gave out his work for free.  If someone wanted a shot for an album cover or a poster, Matsueda says, he just handed it to them.  In the meantime, the list of L.A. scene musicians who owed him a favor grew steadily longer.

When Matsueda decided to cut an album or two of his own, that list proved invaluable.  “I probably recorded in 30 different studios,” he says, piecing together time wherever he could find it.  And among the muscisians whose goodwill he’d earned, there’s some top-notch talent.  Jerry Watts, who you can hear playing bass on the sample track above, has also played with names like Steve Vai and Sheryl Crow.

Around the time he did “Poison,” Matuseda says, he was listening to a lot of The Smiths.  “So it has some motion to it, and a bass line that drives the tune,” he says.  “It’s my dedication to them.”