‘I Wouldn’t Trade A Minute Of It’ 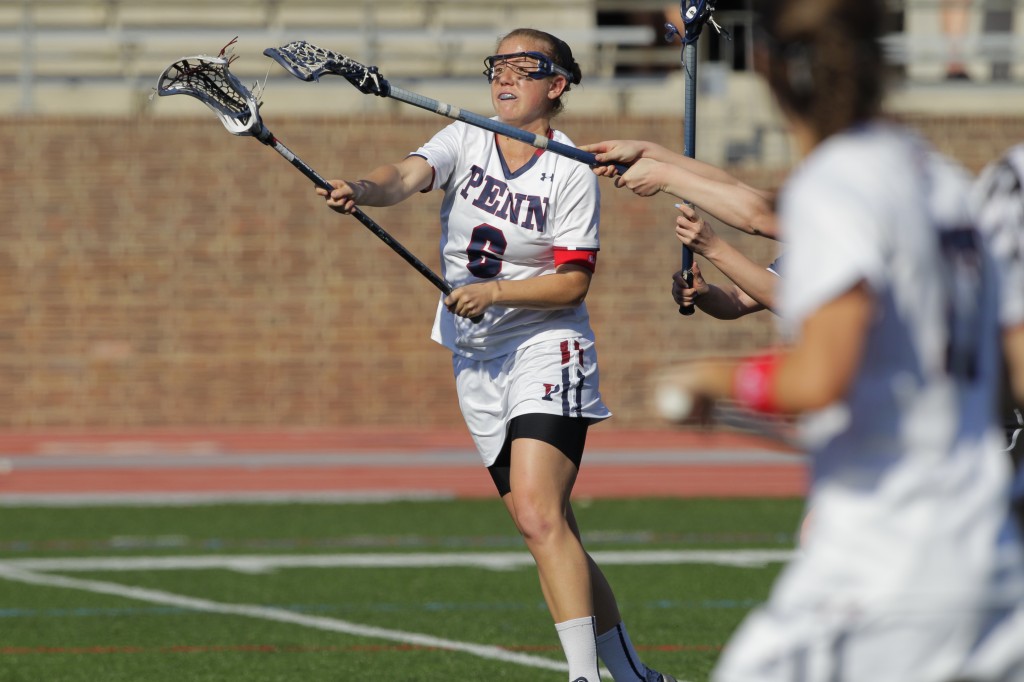 Over the past couple of days, many Penn senior athletes donned their caps and gowns and said goodbye to the athletic fields, courts, mats, pools and rivers they called home for the last four years. Perhaps none of them were as accomplished as Tory Bensen, who just wrapped up an incredible athletic career at Penn.

The Penn women’s lacrosse star was named the Ivy League Attacker of the Year (with her classmate Meg Markham winning Defender of the Year honors) after tying Penn’s single-season record for goals with 58. Bensen, who was also named an All-American by the Intercollegiate Women’s Lacrosse Association along with Markham and senior goalie Lucy Ferguson, graduated with 141 career goals (the second most in program history) and 163 points (the fifth most of all time).

And, of course, Bensen helped the Quakers get to the NCAA tournament every year she was in school (which is five seasons if you include the 2012 campaign in which she only played in three games due to a season-ending injury).

We’ll have more on another memorable season for the women’s lacrosse team — which ended in the second round of the NCAA tournament after its Ivy League championship streak ended at eight years — in the next Gazette print issue. But in the meantime, here’s a senior spotlight on Bensen, a communications major who was kind enough to discuss her time at Penn, both on and off the field.

On what it meant playing lacrosse at Penn: “Probably the proudest achievement in my 22 years. It defined me as a person. It introduced me to my best friends. And I’ve been challenged and pushed and made better because of it.”

On her decision to come to Penn: “I was deciding between big D-1 schools that have a lot more money than the Ivy League. I think what really pulled me in was the team and, above all else, [head coach] Karin Brower Corbett. She has created such an amazing legacy and program and was impossible to say no to. It was just an opportunity of a lifetime.”

On her record-breaking career: “It’s really exciting. But I think it’s more of a credit to our whole attack and our whole team that set me up for those shots and made me the player that I am.”

Time devoted to lacrosse at Penn: “I’m not even sure I can count the hours because it’s so much more than practice and film. It’s early morning walks down to the field, time in the training room, time in the locker room. It’s much more than I could probably even guess. But it was all worth it. I wouldn’t trade a minute of it.” 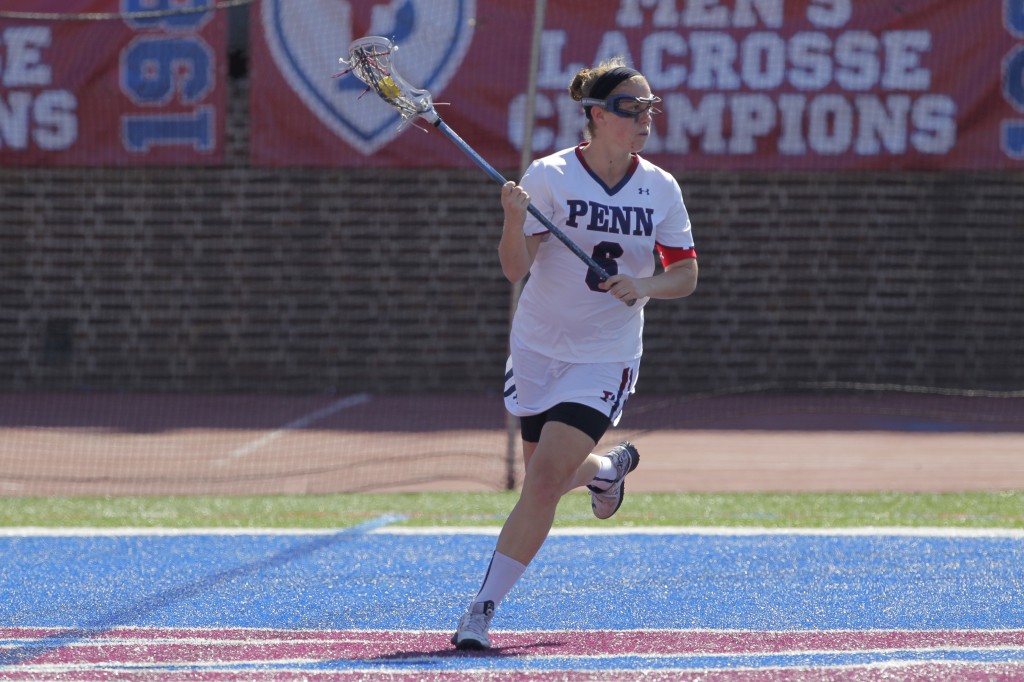 Favorite part of college lacrosse: “It has to be the people. The team is by far the best thing. It really made working hard every day a real pleasure.”

Best lacrosse moment at Penn: “Beating Duke and beating UNC my freshman year [in 2011]. Those games were some of the most exciting ones I ever played – my first year of college getting those big wins under my belt.”

Funniest lacrosse moment at Penn: “The first run test, people have no idea what to expect. We’re all exhausted and something crazy always happens during them. It’s the first time we’re all together and we have no idea what they’re gonna do. But we get through it and get better from there.”

Favorite Ivy League team to play: I think all Ivy League teams are so much fun. Everyone gets so fired up and there are special traditions for Ivy games.” 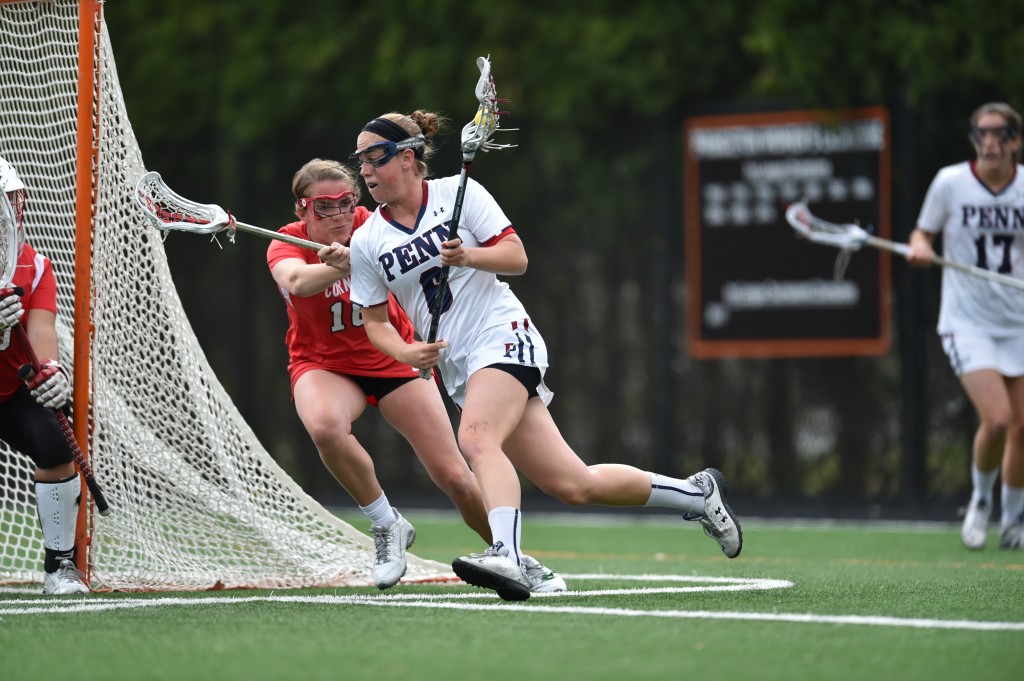 Favorite part of Penn away from Franklin Field: “I would have to say being on campus and being in Philly. Having a real campus and a beautiful school and then to step outside in one of greatest cities in U.S. – there’s just so much to do. We did a fair amount of exploring the city and going to Phillies games and trying to get to see as much as we can — running along the river, going to the Art Museum. It was a really cool part of college.”

Favorite class: “Non-Profit Communication Strategy with Joan Garry. She is a non-profit consultant that teaches one class a semester and is really hands-on and engaging, and turns the classroom into a really cool learning experience. She’s just one of the greatest teachers I’ve ever had.”

Favorite campus eatery: “The Smoke’s Pizza Kitchen. Enjay’s Pizza cooks out of their kitchen and they serve dinner there.” [Editor’s note: who knew the venerable Smokey Joe’s had pizza?]

Favorite sport at Penn besides lacrosse: “I loved being at the Palestra. Seeing the volleyball and basketball teams play always fun. I went to field hockey games. One cool thing about Penn is the athlete community is so close and in some ways its own little community. It was fun to support each other. I definitely enjoyed checking out other sporting events.”

Thoughts on graduation: “It’s so surreal and strange. I can’t believe it’s over.”